Buñuel in the Labyrinth of the Turtles

In an early scene in “Buñuel in the Labyrinth of the Turtles,” the visionary filmmaker Luis Buñuel flashes back to a formative day in his childhood. As a young boy, he is racing to catch up with a group of drummers in a square. He falls, his hands bloodied. When he finally gets to the front of the group and begins drumming, his blood splashes the drum. If it were in a traditional biopic, the very literal commingling of the human with the artistic may feel too direct, but it sets the stage for what’s to come in a very nontraditional telling of film history. Watching this unique film, I was struck by something Brad Bird told me years ago, which could basically be paraphrased as “animation is a form, not a genre.” The fact that this site is reviewing an American animated sequel to a film based on a mobile video game (“The Angry Birds Movie 2”) and this Spanish production about the filming of a barely-seen short documentary film in the career of Luis Buñuel in the same week could be the greatest proof yet of Bird’s statement, especially since these two films, which couldn’t be further apart in terms of purpose and tone, are both getting the same star rating.

Luis Buñuel’s 1933 “Las Hurdes: Tierra Sin Pan” is a fascinating short documentary that the filmmaker shot decades before he would become an international icon, at a tumultuous time both in his career and the fate of his country. As the Spanish Civil War lurks on the horizon, Buñuel struggles to find his identity as a filmmaker, coming off the success of “Un Chien Andalou” (but the shadow of Salvador Dali) and the controversy that greeted its follow-up, “L’Age d’Or” in 1930, a film which got him branded a heretic. Buñuel chose to go to a mountainous region of Spain that was so remote that it had only recently had a road constructed to it and discovered how to make bread (hence the title of his new project, which translates to "Las Hurdes: Land without Bread"). At least according to this film, the Las Hurdes region proved a fertile location for Buñuel’s interests as a filmmaker and his surrealist bent. The animated film is intercut with footage of the actual documentary, and it’s a fascinating blend of the surreal and the realistic. The main source of income in this village is taking in orphaned children, for whom the government pays a subsidy. So there are kids everywhere, all of them incredibly poor, and generations of in-breeding has led to health issues, but no real medical help.

How Buñuel approaches his subjects becomes the main thrust of “Buñuel in the Labyrinth of the Turtles,” and the divisions that arise between him and his collaborators, including a producer friend who used lottery winnings to pay for the production. Is Buñuel mocking these people? And do his filmmaking needs outweigh the actual ones of the residents of Las Hurdes? Buñuel was notoriously and openly manipulative in the filmmaking. For example, when a goat doesn’t fall off a ridge to give the filmmaker the shot he wants, the crew shoots it. He reportedly covered a sick donkey with honey to have bees attack it and kill it.

If you’re thinking this is a lot of artistic philosophy for one animated film, you’re not wrong, but director Salvador Simó has a light touch that mingles surrealism with history lesson. He regularly returns to dreamscapes that Buñuel would admire, very rarely in a way that underlines the internal struggles of the filmmaker at the time but that highlight how his visions co-existed with his reality. At its best, “Buñuel and the Labyrinth of the Turtles” is as caught between dream and reality as the film that Buñuel made in the mountains of Spain. Assisted by a gorgeous score by Arturo Cardelús, it is a film that flows back and forth between animated vision and a more traditional story of process and filmmaking. Buñuel’s lottery-winning producer butts heads with the filmmaker and their relationship dominates the final minutes of the film in ways that I didn’t expect and I’m not sure completely works, but it does remind one of the legacy of a man who would soon become a victim of the Spanish Civil War.

Why tell this story now? And why do it in animated form? The latter question is partially answered by the surreal dreams that would be near-impossible on a small budget in live-action form, but it’s also I think because of how much the film-within-a-film played with the medium. As “Las Hurdes” blurred documentary and fiction, this film blurs what we traditionally expect from animation. As for why to tell this story, it’s all really there in an opening discussion about the impact of art and what is gained from dissecting it vs. just experiencing it. Questioning why we make art, and how specific chapters in the lives of some of our most influential artists shaped their entire careers, will never get old, especially for film lovers. And that’s true for whatever form, not just genre, that the art takes. 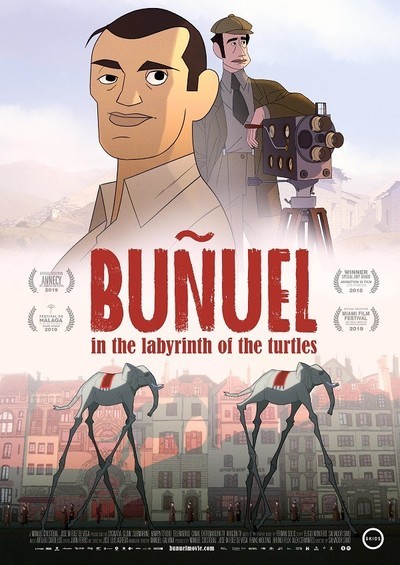 Buñuel in the Labyrinth of the Turtles (2019)