It's not a ringing defense of artistic quality to say that a movie about pigs and flightless birds that's based on a mobile app game and aimed at small children sometimes gets judged by a different set of standards than other movies—chiefly, "Will they laugh?" The answer, in the case of the original "The Angry Birds" film, was a definite yes, and it's even truer for this sequel, even though the mix of Skittles-colored characters, video game-looking graphics, obvious needle-drop music cues, and incessant lowbrow slapstick (butt jokes, groin injuries) might get tiresome for anyone over the age of, say, 12.

The conception of the original project was also odd, though perhaps no odder than that of most of other big-budget animated pictures aimed at families. The main character, Red (Jason Sudeikis), was a belligerent, often physically violent individual, sentenced by a judge to undergo anger management training, a plot line you'd expect to see in a live-action comedy aimed at grownups (like, well, "Anger Management"), and a lot of the social satire, while welcome, surely didn't register on most little ones. The entire thing felt ungainly, and the required emotional catharsis at the end didn't quite feel earned. This sequel is more shenanigans-based. The plot eventually leads to a combination heist movie/band of heroes on a military mission storyline, which is more conducive to kid-oriented slapstick and lets the project feel less ungainly and lighter on its feet (although there's still a fair amount of sexual humor that might be considered inappropriate, were there a chance small children would get it).

The plot picks up from the end of the last one, with Red being hailed as a hero for rescuing Bird Island from the onslaught of the green pigs, who live on an adjacent island. Now that he's won the admiration of the other birds, Red isn't angry anymore, but the movie fills that particular vacuum by introducing a lanky bird with a feathered mane named Zeta (Leslie Jones), the leader of an ice-covered third island that begins attacking both the birds and the pigs. Zeta is tired of living in a glorified freezer, and begins the inevitable catapult war by lobbing a gigantic ice-ball. The pigs and flightless birds have to set aside their differences to defeat a common enemy, a classic plot for a sequel to a movie that was itself at least half of a war-movie spoof.

There are a lot of the expected butt jokes and malaprops and sub-"Who's on first?" exchanges, and all of the references to classic Hollywood movies that you'd expect in this sort of project (especially the James Bond and "Mission Impossible" series, "The Life Aquatic," and "The Great Escape," which appropriately starred a character nicknamed The Cooler King). But things move along at such an agreeably fast clip—particularly in the second half, when the mission gets underway—that it'll be a pleasurable experience for kids and adults alike. There's a lot to be said for a movie that finds the heroes sneaking into a supposedly impregnable place dressed in a giant bird costume that suggests a mascot you'd see at an especially shabby minor-league ballpark, setting up a potentially bruising fistfight between them and a huge henchman, and resolving it with a breakdance battle. The goofier and more random the movie is, the better it is, and it certainly gets goofier and more random as it goes. 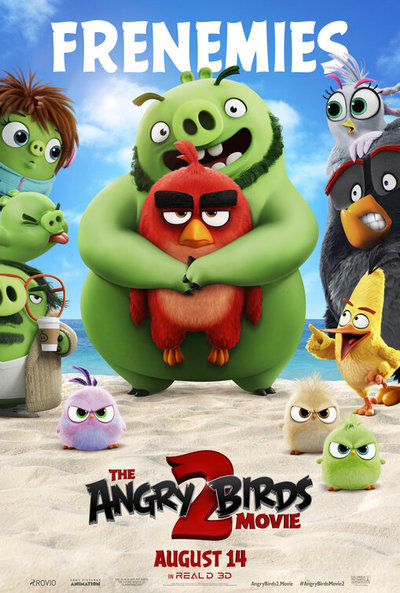