When I learned that “Book Club,” Hollywood’s latest bid to please the senior-discount demo with a glittering array of big-screen notables of a certain age, was partly inspired by the “Fifty Shades of Grey” trilogy—aka “The Joy of Sex” for semi-literates—I shuddered a bit. Please, don’t waste the estimable talents of Jane Fonda, Diane Keaton, Candice Bergen and Mary Steenburgen, all acting together for the very first time, on kinky cosplay.

But except for a pair of wayward Spanx that threatens to strangle one of the ladies, there is mostly talk and no real S&M action. Turns out that the steamy bestseller simply serves as an ice-breaker. Instead, this fairly laugh-packed comedy aims to address the desire for intimate companionship in older adults, an increasingly topical issue as more Americans live into their nineties. “Book Club” might not be able to resist stooping to a cheap extended Viagra gag, for which Craig T. Nelson deserves a good sport medal. But it generally strives to maintain the dignity of its seasoned cast while making hay off of their collective chemistry.

After being a producer behind many of Robert Redford’s latter-day projects such as “A Walk in the Woods” and “All Is Lost,” Bill Holderman appears to be re-energized by this up-for-anything crew of funny females in this, his directing debut, as well as a motley mix of would-be suitors that includes Don Johnson, Richard Dreyfuss, Andy Garcia and Wallace Shawn. He also is no fool, since he has a woman sharing in the writing and producing duties—Erin Simms, a fellow Redford alum. Together, they capture some of the throwback sisterhood spirit of “The First Wives Club,” while aging it like a fine wine whose cork is ready to pop.

Speaking of which, much vino is consumed as the central quartet hold their meetings. Each character represents a distinctive romantic stage of older womanhood. Fonda’s Vivian is a never-wed, fabulously successful luxury hotel owner who has a huge appetite for sex but steadfastly shuns commitment. Keaton’s Diane (yes, they wrote the part for her) is a recent widow after 40 years of marriage. Her two grown married daughters (Alicia Silverstone and Katie Aselton) never consider that maybe she wouldn’t want to spend the rest of her days in the elder-care-ready basement in one of their Arizona homes. Bergen’s Sharon is an outwardly intimidating federal judge who hasn’t had a relationship of any kind, save with her cat, ever since her divorce 18 years ago. But now that her ex (Ed Begley Jr.) and son are both engaged, she decides to give online dating sites a try. Steenburgen’s Carol is the only one of the bunch whose marriage is still intact as she lives out her dream as a successful chef with a bustling eatery. But she and hubby Nelson haven’t enjoyed any bedroom activity ever since his male pride took a dive after he retired six months ago.

Of course, all eventually ends well. Fonda’s old flame Johnson shows up to rock her world, Keaton becomes smitten by Garcia’s suave pilot (just ignore the fact that they were nephew and aunt in “The Godfather III”), Bergen gets busy in a car’s back seat with Dreyfuss, and Steenburgen and Nelson re-ignite their desire for each other on the dance floor to the strains of Meatloaf. It’s best not to spoil how they get to each point, but keep an eye on Murphy Brown—she’s a secret spitfire who speaks truth to power and deservedly gets the right to utter the lone F-word.

There are Easter Eggs to be mined that serve as tributes. Fonda dons thigh-high “Klute” boots, Steenburgen does the same tap routine that she did in her Oscar-winning role in “Melvin and Howard” and Keaton’s snazzy menswear-inspired wardrobe screams Annie Hall goes granny. And kudos to cinematographer Andrew Dunn (“Gosford Park,” “The Butler”) for lighting this over-50 crowd just right.

Now for a few bugaboos. The upper-class milieu of these primarily Santa Monica residents is almost as blindingly vanilla and cushy as those found in one of Nancy Meyers’ perfectly curated confections. But, as they say, money can’t buy you love, so let’s not be too judgmental. Besides, an event for No Kid Hungry, an actual charity that Steenburgen backs, is featured so there is that. And, although it might be tacky to bring up a woman’s age, it’s odd that the lead foursome is described in press material as being in their sixties. Steenburgen is the only one who qualifies at 65. Diane claims she was born in 1951, but Keaton herself just turned 72. Bergen is 71. And Fonda? Forget about it. At this point, her driver’s license should truthfully just say “timeless.”

Oh well, age is just a number. Besides, you wouldn’t want to recast these parts with anyone else. 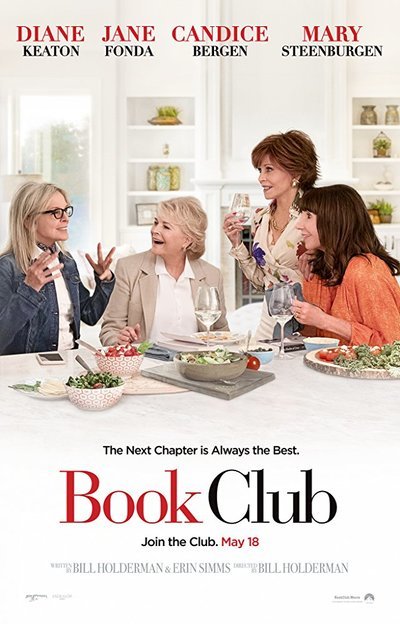