Melvin Dummar says that what used to happen to Horatio Alger's heroes really did happen to him: He gave a lift to a doddering old hitchhiker, loaned him a quarter, and was left $156 million in the hitchhiker's will. If everybody is telling the truth and the will is genuine, the hitchhiker was Howard Hughes.

But Jonathan Demme's wonderful new comedy “Melvin and Howard” doesn't depend on whether the so-called Mormon Will was really written by Hughes. That hardly matters. This is the story of a life lived at the other end of the financial ladder from Hughes. It sees Dummar as the kind of American hero who would send Alger out to hang himself.

For what, after all, constitutes heroism? And why shouldn't Dummar be considered a hero? We learn from this movie that he ventured single-handedly into the jungle of American consumerism, and lived. We see his major battles. Here's a guy who was married three times (twice to the same woman, the second time with the “Hawaiian War Chant” playing In an all-night Vegas chapel).

He had three cars and a boat repossessed, he went from being Milkman of the Month to hauling his first wife off a go-go stage, he loved his children, did not drink or smoke, and stood at the brink of losing his gas station franchise on the very day when a tall, blond stranger dropped what looked a lot like Hughes' last will and testament into his life.

The genius of “Melvin and Howard” is that it is about Melvin, not Howard. The film begins and ends with scenes involving the Hughes character, who is played by Jason Robards as a desert rat with fading memories of happiness. Dummar stops in the desert to answer a call of nature, finds Hughes lying in the sagebrush, gives him a ride in his pickup truck and gets him to sing. For reasons of his own, Hughes sings “Bye, Bye Blackbird”: Got no one to love and understand me… oh, what hard-luck stories they all hand me.

Robards is a chillingly effective Hughes. But this movie belongs to Paul Le Mat, as Dummar. Le Mat is the actor who played the round-faced hot-rodder in “American Graffiti,” and Dummar is the kind of guy that character might have grown up to be. He is pleasant, genial, simple of speech but crafty of mind, and always looking for an angle. He angles for Milkman of the Month, he plots to get his wife on a TV game show, he writes songs like "Santa's Souped-Up Sleigh," he plays the slots at Vegas and goes through his life asking only for a few small scores.

When he gets a big score -- named beneficiary of $156 million in a will that seems to have been signed by Hughes -- he hardly knows what to do, Long-lost relatives and new-found friends turn up by the dozens, and press conferences are held in front of his gas station. There is a court trial. The movie never really addresses itself to the details of the Hughes will court case. It goes instead for the drama, and for the effect on Dummar and his family.

This is a slice of American life. It shows the flip side of Gary Gilmore's Utah. It is a world of mobile homes, Pop Tarts, dust, kids and dreams of glory. It's pretty clear how this movie got made. Hollywood started with the notion that the story of the mysterious Hughes will might make a good courtroom thriller.

Well, maybe it would have. But my hunch is that when they met Dummar, they had the good sense to realize that they could get a better -- and certainly a funnier-story out of what happened to him between the day he met Hughes and the day the will was discovered. Dummar is the kind of guy who thinks they oughta make a movie out of his life. This time, he was right. 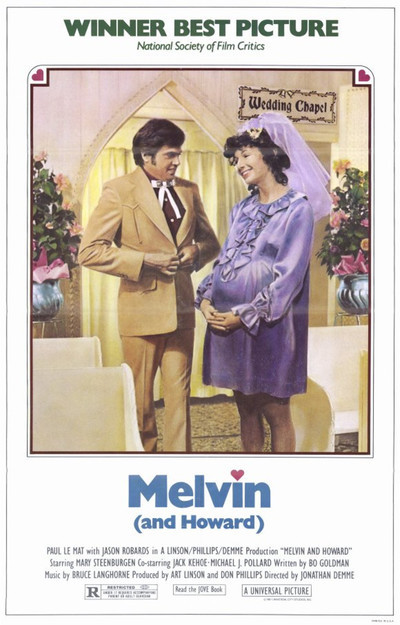 Charles Napier as Man with Envelope