A Walk in the Woods

There is only one question that you need to ask yourself before deciding to see “A Walk in the Woods”: Can you justify sitting through an utterly predictable and rather tame man vs. nature ramble in order to enjoy the affable odd-couple chemistry shared by Robert Redford and Nick Nolte?

Certainly, it is hard to resist a rare opportunity to observe these seasoned septuagenarians go at it with gusto, especially considering that the only other time Redford and Nolte have been cast mates was in the barely-seen 2013 political thriller “The Company You Keep.” Nowadays, the handsomely rough-hewn star of “North Dallas Forty” looks more like a ruddy-faced Yeti while the still-fit Sundance Kid is paying the price for all that ultraviolet glare on the ski slopes. But these guys still know how to not just hold our attention but grab it, even if their current film needs them more than they need it.

Redford, who is also a producer, initially planned on reteaming with buddy Paul Newman a decade or so ago when he began to piece together this project based on Bill Bryson’s humor-filled 1998 account of his misadventures while hiking the 2,180-mile Appalachian Trail. A reunion with his sparring partner in “Butch Cassidy and the Sundance Kid” and “The Sting,” halted by Newman’s death in 2008, would have been a must-see event. But the ever-volatile and gravel-voiced Nolte and the perennially cool and smooth-talking Redford manage just fine as a bracing pair of fellow travelers.

The feminist in me initially planned to bash “A Walk in the Woods,“ directed in typical middle-of-the-road fashion by  Ken Kwapis (“He’s Just Not That Into You”)  with an unfortunate insistence on telegraphing almost every laugh. On what grounds? That both leads are at least 30 years too old for their roles since Bryson and his estranged reprobate pal, Stephen Katz, are 44 in the book.

Would Hollywood have allowed, say, Shirley MacLaine and Debbie Reynolds to headline “Bridemaids”? But then I recalled that Reese Witherspoon in last year’s “Wild” was more than 10 years older than the real Cheryl Strayed, who was 26 when she traversed the Pacific Crest Trail. Besides, genuine star power knows no expiration date and, without these esteemed seniors as a main attraction,“A Walk in the Woods” might have been unwatchable.

Whereas a solo Witherspoon in her Oscar-nominated role struggled with her inner demons as much as she did the elements, “A Walk in the Woods” is more about two unlikely acquaintances crossing paths again after a long-ago falling out caused their relationship to go astray. Redford’s wry Bryson, a popular writer of travelogues who is tired of resting on his considerable laurels while spending too much time writing forewords for other people’s books, is in a funk after attending a funeral. That is when he spies a marker for the Georgia-to-Maine trail near his New Hampshire home.

Against the wishes of his sensible British wife of 40 years (Emma Thompson, under-used as a radiator of warmth), he decides on a whim to attempt this marathon test of endurance and picks Katz to join him – primarily because none of his other friends are crazy enough to say yes. Katz, based in Bryson’s native Iowa, claims that the fact that he has several outstanding warrants against him is the reason he has volunteered to huff and puff over hill and dale. But when this recovering alcoholic and unrepentant womanizer admires the tributes and accomplishments piled up in his Bryce’s den, it is clear Katz desires some sort of reconnection as well.

Considering that Nolte’s wheezy scalawag can barely stumble out of a small plane, matters move a tad slowly at first but eventually pick up. Bryson might be a thinker and Katz a talker, but unlike “Wild,” there are few deep revelations or bouts of philosophizing along the way. Instead, amusing incidents, encounters and mishaps pile up as the companions fill in the blanks of their personal histories. Be forewarned: There is an R-rated abundance of salty language, what with Bryson prone to expressing what a bear does in the woods and Katz’s committed embrace of the F-word, as well as non-explicit frisky business implied.

Occasionally, Kwapis slips in a shot of scenic splendor as a reminder of where we are. Bears put in a cameo along the way, as well as other such other natural hazards as rain, snow, mud and slippery slopes. Then there are annoyances of the human variety. Kristen Schaal is in her comedy comfort zone as a pushy chatterbox hiker who likes to flaunt her superior knowledge of three-season tents as she attempts to tag along with Bryce and Katz. Her appearance conveniently acts a bonding agent for the men as they conspire to ditch her.

Despite excusing the age discrepancy issue, I still recoiled now and then at how every female onscreen exists to simply serve the needs of the central male characters. I guess it makes sense that Nolte’s Katz has a Neanderthal’s notion of women, as revealed in his speech about the romantic options of an ugly sister, with being slutty as No. 1. An inveterate chubby chaser, his need to crack suggestive pancake remarks to a plus-size waitress is topped by his laundromat encounter over a pair of pink panties snagged in a washer with a local who he describes as “a beautiful body buried under 200 pounds of fat.” Meanwhile, Redford’s Bryce shares a flirtatious pas de deux with Mary Steenburgen’s roadside motel proprietress but does not stray, much to Katz’s horndog chagrin.

One wonders what might have been if Newman were still around. Oddly enough, there is a scene that briefly summons memories of Butch and Sundance when the guys are trapped on a ledge and peer over a harrowing incline to see a body of water below. I kept hoping they would jump in together. But it was not to be. 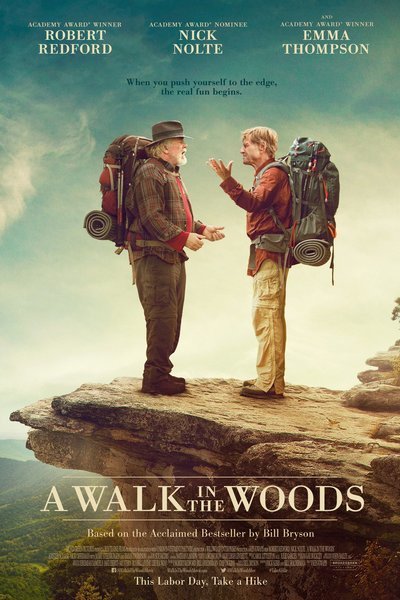 Rated R for language and some sexual references