"All is Lost", writer-director J. C. Chandor's sophomore effort following 2011's "Margin Call", is a tremendous achievement, and as far removed from the earlier film as possible. Chandor's debut feature, which earned him a Best Original Screenplay nomination at the Academy Awards, was a claustrophobic ensemble drama that related the bankruptcy of a Lehman Brothers analogue with elaborate, yet somewhat clunky, dialogue. His new film features only Robert Redford as a man stranded in the Indian Ocean, who remains silent for most of the duration.

Chandor's precise approach to conflict and drama is heightened at each new challenge by his technical mastery and formal dedication, buoyed by a bravura performance from Redford, who displays the sort of passionate, no-nonsense rectitude expected from a person willing to cross oceans on his own. "All is Lost" is a reaffirmation that Robert Redford is one of cinema's greatest actors, and an affirmation that Chandor is one of its most promising talents. And it left this reviewer, whose animus towards "Margin Call" had inspired him to label Chandor as a flash-in-the-pan, utterly humbled.

The film begins with a voiceover in which Redford's character, dubbed Our Man in the closing credits, pens a letter of apology to an unknown recipient. Is this note meant for a loved one, or a random soul who might somehow and sometime discover it, or God? It is never made clear. What's extraordinary is that this question is also completely unnecessary. One of "All Is Lost"'s greatest creative judgments is its lack of a backstory. There are no scenes here of contrasting moments of peace on land where Our Man was the lord of all he surveyed, and no half-baked stories about an unfortunate playground accident, either (I'm looking at you, "Gravity").

A flashback to eight days previously shows the origin of Our Man's troubles, when he discovers that a free-floating shipping container has rammed his sailboat, causing a yawning gash on the side of the craft. At first, Redford's character seems not too uncomfortable with this mishap, but his stoicism is soon tested when a barrage of formidable storms proves the adage that the sea is, indeed, a harsh mistress.

To say more of the plot would be to spoil the joy of watching this magnificent work (in fact, you should also avoid the trailer if you have yet to see it). JC Chandor and Robert Redford have collaborated in creating a modern classic, a survival tale that respects not only its sole character and his natural obstacles, but also the viewer. Chandor plays to Redford's strengths: his battered visage, calm determination, and detachment from the vagaries of a "normal" existence. In return, Redford gives the performance of the latter half of his career in a role that is not just physically, but also psychologically demanding. They are both aided by sterling work from the film's cinematographer Frank G. DeMarco, who manages to create a palpable dichotomy between the vastness of the ocean and the cramped lower decks of the vessel; as well as Alex Ebert's score, which is used sparingly to beautiful effect.

"All is Lost"'s minimalism makes it ripe for being interpreted as a blunt allegory for life. For one thing, its ending will be up for debate in years to come, seeing as it is a bold volte-face both formally and thematically. Nonetheless, it would be a real shame if discourse were to centre on the finale, because it is the entire film that is a real work of genius. Here is a formidable opus whose real spiritual relative is Tennyson's "Ulysses". Yes. "All is Lost" is that good. 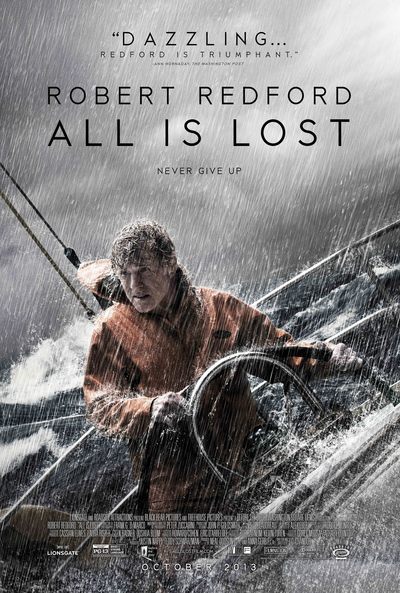 Robert Redford as Our Man