Mike Flanagan has become an in-house horror factory for Netflix, and built quite a following in the process. Netflix Originals “Hush” and “Gerald’s Game” earned the talented filmmaker such cultural cachet that he parlayed their success into an original series for the service, “The Haunting of Hill House,” currently in production. As if to further bolster what seems like it could become its own channel on the service before long, Netflix has unearthed the long-delayed third film by the director of “Oculus” and “Ouija: Origin of Evil,” “Before I Wake,” which was originally scheduled to be released in 2015 and already premiered in most international markets. The film was delayed a few times after its 2014 production and then fell into release limbo after Relativity Media went out of business. When this happens, the eventual release is often a letdown. Put simply, films often gather dust when left on a shelf, and sometimes they’ve been left there for reasons other than financial. But this is not the case with “Before I Wake”—well, not completely. It’s a flawed film, but there are elements that really work, especially the lead performance and some of Flanagan’s gifts with composition. "Before I Wake" is also particularly interesting to watch now as one can see it as a career stepping stone to the movies he's made since.

The release of “Gerald’s Game” revealed that Flanagan had long been carrying around the Stephen King book on which that film was based as it was his dream project. Were “Before I Wake” to be released when it should have been, it would have been easy to see even then that Flanagan was a fan of King’s style. This unfolds a lot like a King short story with its focus on grief and lessons about being careful what you wish for. Clearly inspired by the author, “Before I Wake” is evidence of a young horror voice working through ideas that one would have called promising three years ago—a promise Flanagan has already fulfilled for most. He’s a filmmaker interested in human emotions and reactions more than he is things that go bump in the night.

“Before I Wake” opens with a scene reminiscent of the opening of Joachim Trier’s “Thelma.” A man (Dash Mihok) nervously watches a boy sleeping. The man pulls a gun on the child, clearly terrified. What would make a man almost kill a young boy? He can’t do it, and we cut to the boy being adopted by Mark and Jessie Hobson (Thomas Jane & Kate Bosworth), a couple who we learn has not long ago lost their own son in a tragic drowning. The boy is named Cody (Jacob Tremblay, who shot this before his breakthrough in “Room”), and he’s, well, special.

After Cody has gone to sleep one night, Mark and Jessie see brightly colored butterflies around their living room. Mark goes to capture one, only to have it disappear as Cody wakes. Yes, Cody can manifest his dreams. Rather than turn this into a pure boogeyman tale, Flanagan channels the grief of parents who have lost a child through his concept when Cody “manifests” Mark and Jessie’s dead son. What if someone could give you one more chance to see, touch, and even hear someone you’ve lost? Of course, it comes with a hitch—kids have nightmares too, and Cody’s are of a monstrous creation he calls “The Canker Man.”

Flanagan cleverly weaves his emotional themes through his horror story, embodied in lines like “Sometimes scary things go away when we understand them a little,” one that has heightened meaning when one considers the story when the origin of “The Canker Man” has been revealed. It’s things like this—the way Flanagan refuses to merely tell a jump scare story—that elevate his work. And he’s phenomenal with actors, drawing a great performance from Carla Gugino in “Gerald’s Game” and the underrated Kate Bosworth here, who’s fantastic at conveying a hard-to-imagine blend of grief, anxiety, fear, and hope. Flanagan loves close-ups, and he directs his actors well within them. He’s equally deft at the reveal shots we come to expect from horror such as a figure in a doorway in the background in the middle of the night. When “Before I Wake” gets to the jump scare portions in the mid-section of the movie, especially in a misguided bully subplot, that's when it falters, almost as if Flanagan is way less interested in boogeymen than he is the face of a grieving mother.

“Before I Wake” culminates in a sequence almost out of “A Nightmare on Elm Street” in its dreamscape visuals and one is reminded of Flanagan’s skill with framing (and he uses a great score by Danny Elfman effectively), but also that not everything is coming together here thematically or narratively. Like the butterflies that flit across the frame throughout the movie, the various pieces of “Before I Wake” are individually beautiful but don’t quite cohere into a complete vision in the end. While there's more to like here than in half the horror offerings on Netflix, "Before I Wake" needed one more pass in the writing or editing process, or needed to be done later in Flanagan’s career when he could more confidently stick the landing. Given his rise to fame in the few years this has been on the shelf, maybe Netflix will let their horror all-star remake it someday. 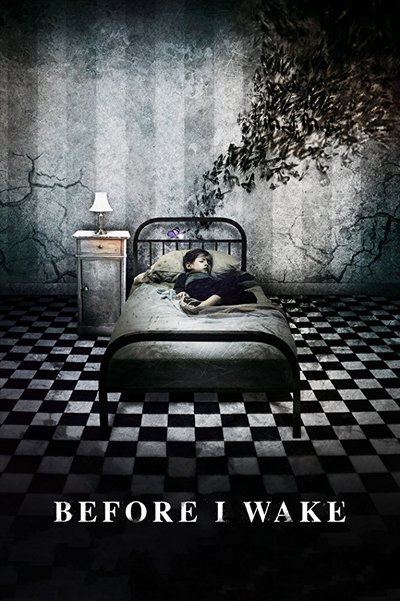 Rated PG-13 for violent content and terror including disturbing images.