Add Mike Flanagan's "Oculus" to the horror subgenre of supernatural item movies. This time it's not a haunted doll or magical box but a deadly mirror with the power to compel people to commit violent acts. A man will think that he is trying to rip a Band-Aid from his finger only to realize that he's pulling his fingernail off instead. And that's nothing compared to what happens to teeth. The mirror has destroyed dozens of lives over the years, such as the time a mother thought she was tucking her children into bed but was drowning them in a cistern. "You see what it wants you to see", as the tagline goes. While the narrative freedom inherent in that premise allows for some truly strong visuals at times—the focus on star Karen Gillan's bouncing red pony tail down a hall or a bloody hand hidden behind a doorframe—"Oculus" eventually becomes little more than a series of ghostly figures and twisted visions on its way to a cop-out of an ending that you'll see coming an hour away. Solid performances and a few memorable images save it from disaster but Flanagan's film left me longing for the movie it could have been instead of what it actually is.

When "Oculus" opens, Tim Russell (Brenton Thwaites) is being released from years of intensive therapy. Much like Daniel Lutz (whose life story became "The Amityville Horror"), Tim believed for most of his time in a padded cell that his father was forced to commit horrendous violence because of a supernatural force. His doctors, including Miguel Sandoval in a prologue cameo, reworked those memories to lead him to believe that dad was just a really bad guy and there was no supernatural mojo at work. And so Tim hesitantly leaves the hospital to reenter society. Maybe having lunch with his sister wasn't the best idea.

Not having the "benefit" of therapy, Tim's sis Kaylie (Karen Gillan of "Doctor Who") wastes almost no time pulling her brother back into the world that he has spent years trying to repress. Kaylie, who works at an auction house, has found the mirror. She steals the haunted antique, setting it up in the family home as the focus of a fantastic array of cameras, alarm clocks, temperature gauges, and even a giant swinging blade designed to finally destroy it. Before Kaylie is willing to put an end to the mirror's unholy reign, she wants to document and prove its power. Another bad idea.

For the entirety of "Oculus," the narrative cuts back and forth from the adult pair's efforts to ghostbust the mirror with what happened to them years earlier. Young Tim (Garret Ryan) and young Kaylie (Annalise Basso) moved into a lovely home with their father Alan (Rory Cochrane), a software designer, and their supportive mother Marie (Katee Sackhoff). And then Dad went antique shopping. With far too little set-up, pop goes off the mental rails and mom is left an inevitable victim. The flashbacks in "Oculus" have a depressing fatalism because we're told who will live and who will die early on, turning these scenes into an exercise in inevitable gore. The lack of suspense is more disheartening when one realizes that the hole hasn't been filled by any sort of social context at all. Films like "The Shining" and "The Amityville Horror" also trafficked in the inevitable but grounded their narratives in cautionary tales of how familial stress and other external factors like alcoholism can destroy a patriarch.

The "present day" material in "Oculus" is much more effective, thanks largely to a game performance from Gillan. She renders Kaylie as a driven woman on the edge of sanity herself. When she growls at the mirror, "You must be hungry," one can see the B-movie glory that "Oculus" could have been. Her younger brother got the treatment he needed but Kaylie was left to fight for the day she could get vengeance on the mirror that wrecked her life. Gillan sells that hair-trigger intensity in the film's best moments, and when Flanagan and co-writer Jeff Howard open the door to the however-brief possibility that Kaylie may actually be crazy, "Oculus" is at its most interesting.

Sadly, they can't maintain that intrigue past the second act. As so many of these ventures do, the final act of "Oculus" becomes an increasingly random series of scenes designed to push buttons instead of anything inherent to character or narrative. If there are no rules or relatable subtext within the world of a horror film, the images have no power. Both overly foreshadowed climactic acts of "Oculus"—they tell us over and over again that dad is going to go homicidal and that they're going to try to destroy the mirror—feel like genre faits accomplis and so their inevitability becomes little more than a shallow reflection of superior works. 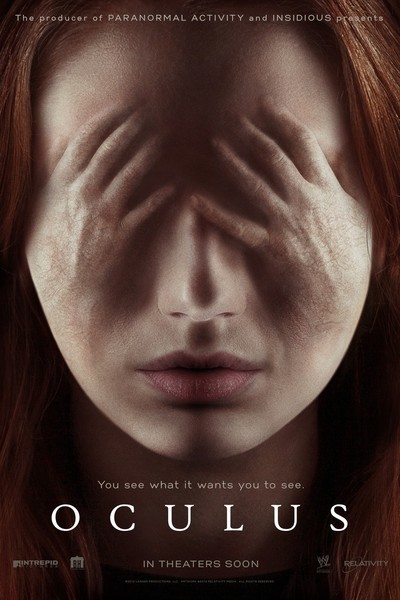