A throwback studio logo not only evokes a sense of nostalgia, it also make a statement. It says “you know me, and you know the kind of movie I once represented. This is that kind of movie.” With that in mind, “Ouija: Origin of Evil” begins with the old, grungy Universal logo that once preceded four “Airport” movies, William Castle’s “I Saw What You Did” and '70s era genre entertainments like “The Sentinel,” “The Car” and the unforgettably named “Sssssss.” As a kid, whenever I saw the dirty, spinning Earth of the Universal logo, I knew that whatever followed would cradle me to its cinematic bosom and nurture my love of trash. This is not a criticism by any means—it’s a cause for celebration. And yes, I know this same logo also preceded “Jaws”; Spielberg’s classic would have deserved it, too, had the cheap-looking shark actually worked as expected.

But I digress. “Ouija: Origin of Evil” is the prequel to 2014’s “Ouija”. Readers of this site know I enjoyed the first film, and while this one does a slightly better job telling its story, it still can’t resist the kitchen-sink approach that endeared me to its predecessor. This is one overstuffed horror movie recipe, with a dash of “The Exorcist” and a spritz of “Ghost” among its tasty ingredients. By the time it gets to the Polish-speaking ghosts and the ghoulish Nazi doctor, you’re so invested in the characters that you’re willing to buy whatever this carnival barker is selling.

“Ouija; Origin of Evil” takes place in 1967 and tells the backstory of the character played by Lin Shaye in the first film. Played here by Annalise Basso, Lina Zander is the eldest daughter of Alice (Elizabeth Reaser), a fake fortune teller whose house is rigged with customer-fooling trickery. As Lina and her younger sister, Doris (Lulu Wilson) hide in the background and work the special effects, Alice gives what she considers “comfort” to the grief-stricken folks who’ve lost loved ones. The opening scene accomplishes a lot, providing humorous jump scares while establishing the familial bond between the Zanders.

Not much in the way of scares happens for a little while after that. Director/writer/editor Mike Flanagan gives “Ouija: Origin of Evil” the patient pacing of a film from the same time period he depicts onscreen. We grow familiar with the day-to-day concerns of each character. The widowed Alice is worried about keeping the house she and her late husband struggled to buy. Doris is bullied at school because of her mother’s profession. And high school sophomore Lina has a crush on Mikey (Parker Mack), the cute, lanky senior whose palm Alice “reads” when he visits the house. “Is this your dominant hand?” Alice asks her daughter’s potential paramour before dispensing his fortune: “If this, or your other hand touches my daughter in a way I don’t like, your lifeline will get much shorter.”

It’s Mikey who asks the Ouija board a question he could have gotten answered on this plane. But more importantly, the session he, Lina and her friends have inspires Lina to tell Alice to incorporate the board into her psychic act. Alice buys one, and we learn the three rules that you know will be violated: Don’t play alone, don’t play in a graveyard, and always say goodbye to whatever the hell it is you were talking to on the board. Nobody says goodbye, but that doesn’t mean they won’t be leaving.

Of course, Doris plays alone, because this movie needs a scary little girl. Unlike her successors from the first movie, however, she waits for the board to complete its answers. The Zanders are a bit too calm when the Ouija board’s planchette starts moving by itself, and Doris starts to have a real connection to the spirit world. But there’s an explanation for that—Alice’s mother had real psychic powers. “Maybe it skips a generation,” she says before incorporating Doris into her now-realistic readings. Unfortunately, Alice doesn’t know the real reason her daughter has become a wi-fi hotspot for the deceased: She’s possessed by a really creepy-looking entity.

If we’ve got possession, we gotta have a priest. He’s Doris’ school principal Father Tom, a man of the cloth who found the seminary after his wife passed away. This potential exorcist is played by Henry Thomas, who once starred in a movie that also bore the grungy, old Universal logo, “E.T.” Thomas is very good here, especially in a scene where he and Alice go on what would normally be described as a date. The two actors let their attraction for one another play out without once acting upon it. These two, lonely widowed people walk that tightrope knowing the safety net of Father Tom’s priesthood hangs comfortably below them.

Later, Thomas gets the film’s best, most suspenseful scene. Father Tom comes for a reading where he communicates with his late wife. The outcome of that reading, and Father Tom’s reasons for doing it, are intercut with a likable character in grave danger. Flanagan’s edits carefully build the tension as we hop back and forth between Father Tom’s exposition and the threat of fatal violence being perpetrated elsewhere.

It’s at this moment that all hell breaks loose, and “Ouija: Origin of Evil” becomes more concerned with delivering a wide variety of familiar scares than generating suspense. But this is what you came to see, and the numerous gruesome horrors are rendered in enjoyable fashion. It also helps that all the actors give good performances, especially Wilson, who has the hardest role to play. Plus, some clever thought was put into tying this film to its predecessor, from the familiar house, to the graphic use of medical stitches, to the way Flanagan shoots Lina’s last appearance onscreen. And unlike the “Transformers” series, "Ouija: Origin of Evil" is far more effective as a movie than a toy commercial for Hasbro. 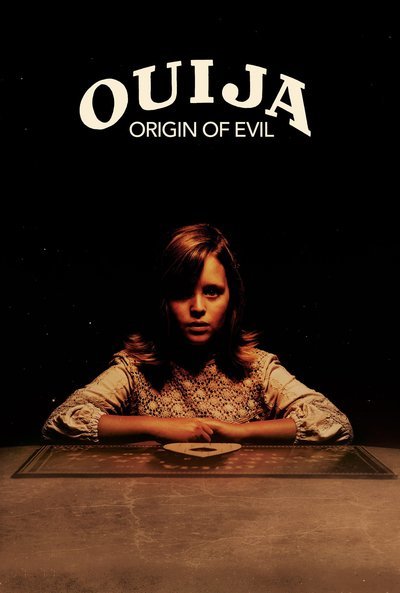