The opening scene of "Thelma," Norwegian writer-director Joachim Trier's latest film, is so quietly unnerving its effect spills over into the rest of the film, creating a hall of echoes. A father and his child walk across a frozen lake, tromping through snow-laden woods. He carries a rifle. When the father takes aim at a deer standing in the distance, the daughter is so riveted by the deer she is oblivious when her father turns to point the rifle at the back of her head.

The film jumps some years in the future. Thelma (Eili Harboe) is now a freshman in college, starting her life away from home. She is still tied to her over-protective parents, Trond (Henrik Rafaelsen) and wheelchair-bound Unni (Ellen Dorrit Petersen). They call her repeatedly if she doesn't answer her phone; they have memorized her class schedule; they ask her what she's cooking for dinner. She was raised a devout Christian, and her parents are concerned she may compromise her morals like so many young people do when they first leave home. But the anxieties unleashed in the prologue reverberate, even during the long stretches where the film takes the form of a tremulous sexual-awakening story. When Thelma confides in her father, her head resting wearily on his shoulder, the image of him pointing a rifle at her years earlier shivers around them like an afterimage. The sense of threat is palpable, but it's unclear what the threat is, and from which direction it comes.

Thelma, raised in isolation, wanders through the partying social atmosphere of college like a prim little wraith. Although she studies Biology, that most earthy of subjects, she appears so insubstantial that a breath of wind might blow her away. One day, while studying in the library, Anja (Kaya Wilkins) sits down next to her, and the two have a brief casual exchange. Moments later, Thelma is overcome by a seizure which leaves her writhing on the floor. She tells the doctor she doesn't have epilepsy as far as she knows. Later, Anja approaches her at the pool where Thelma does laps, asking if she's feeling better. To say that Thelma is "touched" doesn't come close to expressing the intensity of response. Thelma melts at the show of concern. Kindness is miraculous to Thelma. Even more miraculous, the beautiful and casually confident Anja includes Thelma in her group of friends, and Thelma does things she's never done before: dance in a nightclub, get a little drunk, not pick up when her parents call. Thelma is a sheltered girl, overwhelmed by her new freedoms and her sexual attraction to Anja ... but deeper than that, she is overwhelmed by feeling.

There's a lot going on in "Thelma," too much at times, with a number of familiar story-structures dovetailing in at different angles. Ultimately, it's the story of a strange submissive girl investigating the mystery of her own clouded-over past. It's also a coming-of-age story, compressed and thwarted by parental control via religion reminiscent of "Carrie" (the film owes a lot to "Carrie"). It is crystal clear that "coming out" to her parents would not be an option, so as Thelma falls head over heels in love/lust with Anja, her psychological situation deteriorates. The seizures get stronger, more violent. "Thelma" operates, too, like a thriller, or a horror film, filled with strange portents and seemingly supernatural phenomena. There are some truly spooky sequences. But its engine is the emotional awakening of an extremely repressed girl, a girl who finds emotions so stressful it ruptures the fabric of her reality.

Joachim Trier keeps the film firmly in Thelma's point of view. What she sees, we see. Because she is an unreliable and increasingly freaked-out narrator, it's never clear if what we are seeing is real or not. She has nightmares, although you wonder if they are flashbacks to her mysterious childhood. You remember, yet again, the look on her father's face when he turned the rifle on the back of her 8-year-old head. Is it just religious paranoia, or do her parents have a reason to be frightened of what she might do out there in the world?

Trier, in films as diverse as "Reprise," "Oslo, August 31st," "Louder Than Bombs," and now "Thelma" (all of which he co-wrote with Eskil Vogt), effectively taps into the undercurrents of dread running through human beings' lives. The dread may not have a specific source, although it can become focused, expressing itself in suicide attempts, heroin addiction, the isolation that comes with depression. Trier's films are filled with a tragic kind of knowledge, the knowledge of what it means to struggle, but also the knowledge of what it means to stop struggling. The dread in "Thelma" is not so easy to pin down, coming as it does almost totally through Trier's choice of visuals. Shot in cinemascope, "Thelma" often switches startlingly from a micro view to a macro. This completely destabilizes the point of view of the film. From a closeup of Thelma's face, Trier moves suddenly to a crane shot showing the exterior of the building she's in, before moving back to a closeup. This choice flings you out of balance. You literally do not know where you are.

Some aspects of the story work better than others. Thelma's detective-work in piecing together her own past is less riveting than her desperate swoon into sexual feelings with Anja and her torment about it. Like "Carrie," "Thelma" works on a metaphorical level, making manifest a culture's phantasmagorical fears about women's bodies, women in general, and showing the shared investment said culture has in repressing womens' sex-drives and rage. But, also similar to "Carrie," it works best when it stays specific, grounded in this one woman's singular experience.

Young Harboe's intensity is reminiscent of the young Isabelle Huppert, and she has a similar fearlessness in flinging herself past normal comfort zones of emotion, her slim body wracked with terror at its own power. Also reminiscent of Huppert is Harboe's slightly "cut-off" quality, which can make her seem like an innocent in a corrupt world, OR the only one in any room who truly knows the score. The journey Harboe goes on as Thelma is shattering to watch.

Emotion, like matter, has substance, weight, heft. It exists. It cannot be destroyed. What happens when you say to a deeply feeling young woman like Thelma, "It is never okay to express any of this"? Where is all that emotion supposed to go? It is this question that Trier, an extremely empathetic filmmaker, cares about the most.

Warning: There’s a scene involving strobe lights that may be seizure-inducing for those with epilepsy. 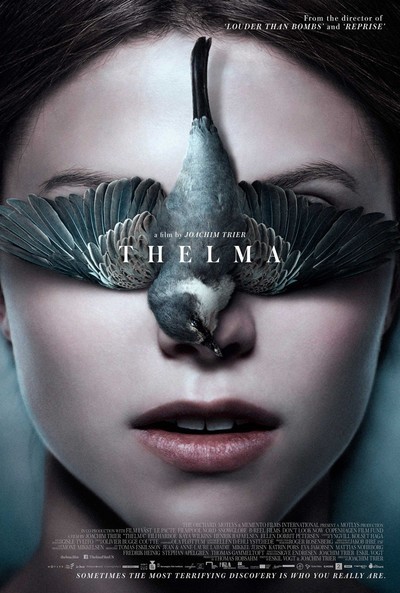