Be Natural: The Untold Story of Alice Guy-Blaché

Pamela B. Green’s “Be Natural: The Untold Story of Alice Guy-Blaché” is the kind of movie I want to root for. It’s a film that excavates and restores a trailblazing woman director to her rightful place in history. While the documentary’s heart is in the right place, and loaded with many historical goodies for silent movie fans and those interested in championing women directors, the way “Be Natural” presents its findings feels unorganized—like walking through a busy museum exhibit with too many objects, not all of them especially necessary.

The movie begins by showing how few present-day big-name filmmakers know who Guy is and what she accomplished in her career. She made hundreds of films both in France and in the United States at a time when women rarely held other jobs outside stenography and domestic work. She ran productions, pioneered cinematic language, and started her own film studio in Fort Lee, New Jersey, the Hollywood town of the early film industry. Yet, for all of her success, she was left out of several history books, her legacy questioned because of her gender, and her works attributed to male assistants or actors.

For women watching the movie, Guy’s story may ring infuriatingly familiar. While we may say nothing, we very much remember the time our name is left off of group efforts, the time our partner is credited with someone we did, or someone assumes we can’t be the one in charge. The documentary goes into great detail just how sexist attitudes of mostly male historians and critics wrote out a prolific woman out of books; how her former boss, Léon Gaumont, left out her contributions to his studio out of his records; and how Guy’s husband, Herbert Blaché, took credit for her Solax Studio for decades.

Green does an incredible job of piecing together the work of academics, scholars, old family heirlooms and almost forgotten private collections to reconstruct Guy’s story. There’s an exciting element to seeing the director painstakingly calling source after source like an investigative reporter. In one endearing sequence, Guy and Gaumont’s descendants tour the spots of where their distant relatives made some of the first movies. Yet, adding too many of these elements distracts from Guy’s story. There’s a sequence of getting an old Silent Era camera to work that is visually interesting but doesn’t serve the search for Guy. The Skype calls begin to blur together, and the celebrity interviews being to feel less impactful.

One celebrity who does have a lot to say in the documentary is the film’s narrator, Jodie Foster. While extolling Guy’s legacy, she alternates between English and French to recreate Guy’s spirit from letters to her loved ones or reimagine the frustration Guy felt when correcting those who left out her name in their film books. Foster’s delivery is measured yet forceful, the sound of a woman making her presence known in a room and not ceding the floor to another voice. Her narration is the closest we have to a tour guide through Green’s deep research, and it helps to smooth the transitions between tangents.

Guy faced omissions of her work head-on, asking for her due credit. Yet, in her lifetime, she never saw her name restored, lost almost all prints of her movies, and died with very little means while the men who profited from her work enjoyed longer careers than she did. In this sense, “Be Natural” is a vital effort to right past wrongs and fix the messes made by (mostly) men. We don’t spend nearly enough time with Guy’s work, but that’s where a collection like Kino Lorber’s recent “Pioneers: First Women Filmmakers” box set comes in handy. It’s easy to wave off Guy’s experience of gross exclusion as ancient history, but Green’s film so rightfully connects the past to the present struggle for women directors. The open doors Guy first found at the birth of cinema closed off her career before she was done working and have not yet opened for other women who have tried to follow in her footsteps. There’s a kind of empowerment that comes with learning about and seeing what a woman can do with a camera and power in hand, and “Be Natural” brings that message to a new generation not far removed from Guy’s time. 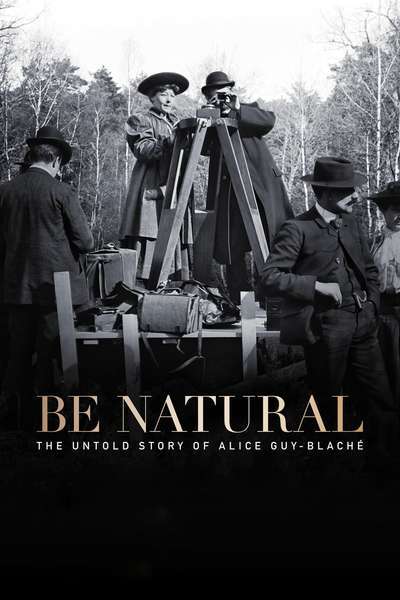 Be Natural: The Untold Story of Alice Guy-Blaché (2019)

Alice Guy-Blaché as herself