There have been numerous sci-fi films about people who had to go to the reaches of space to find truths within themselves but none quite like James Gray’s masterful “Ad Astra.” Thematically dense and visually sumptuous, “Ad Astra” may not work for those seeking an action/adventure thrill ride—it’s more “Solaris” than “Gravity” or “The Martian”—but it works wonders below the surface, serving as an examination of masculinity, a commentary on how we become our fathers, and can even be read as a search for an absent God. This is rare, nuanced storytelling, anchored by one of Brad Pitt’s career-best performances and remarkable technical elements on every level. It’s a special film.

Roy McBride (Pitt) is the coolest man in a spacesuit. In the near future, when space travel is more prevalent, McBride is legendary as someone whose BPM never rises above 80, even when he’s plummeting to Earth as he does in an early scene. The cause for that heavenly dive from a tower that reaches from the ground into space is a power surge that devastates the entire planet, killing thousands of people. The suits in charge of space exploration inform McBride that they have traced the source of the surge back to an anti-matter device stationed near Neptune, which just happens to be the last place anyone heard from a famous mission called The Lima Project. The objective for them was to go to the furthest reach of our solar system and look around at the rest of the universe, trying to find intelligent life. And it just happened to be captained by Roy’s father, H. Clifford McBride (Tommy Lee Jones). For years, Roy has believed his father was dead, but now he may not only be alive but behind an attack on Earth. He is sent to Mars to attempt to communicate with a father he has thought dead for years, in the hope that a reply will allow them to pinpoint his interstellar location.

Earthly disasters possibly caused by a creator who has been absent as the world has lost hope—the religious allegory embedded in “Ad Astra” is crystal clear if you look for it, but never highlighted in a way that takes away from the film's urgency. Science fiction is often about search for meaning, but this one literally tells the story of man’s quest to find He who created him and get some answers, including why He left us behind. McBride’s journey takes him first to the moon, which has been briefly reimagined as a tourist trap, complete with a Subway, and then to Mars, which is the furthest reach that man has colonized. As in Gray’s last film, “The Lost City of Z,” there’s an element of how journey and exploration change a man. The hero with the perfect BPM starts to feel his pulse elevate as he leaves the comforts of his routine and his home, and as the stakes of his adventure rise. And Gray never loses the human intimacy of his story, keeping us tied to McBride’s POV, experiencing only what he does and knowing only what he does. The result is a film that feels both massive and deeply personal with its themes, which is no easy feat.

Don’t get me wrong, while this is a deeply philosophical film there are also traditional action elements and what feel like real stakes throughout McBride’s journey. People die. People make mistakes. People are selfish, scared, and greedy. It feels like McBride’s encounters with others along his journey, including characters played by Donald Sutherland and Ruth Negga, are designed to illuminate the humanity within him. The perfect man who fell to Earth becomes imperfect as he reaches ever closer to his creator, and as he sees the imperfections of those around him.

Through it all, Pitt carries the emotional and physical weight in one of the most subtle and graceful performances of his career. A lot of directors would have been too enraptured with the grandeur of the space around him or the details of the interstellar travel, but Gray allows the camera to linger on Pitt’s face in ways no other director really has before, and it leads to what's arguably Pitt's most complex performance. Pitt avoids showy choices at every turn, but he also doesn’t err in the other direction and make McBride too stoic. It’s a perfectly calibrated performance. With his work here and in “Once Upon a Time … in Hollywood,” 2019 is the best year of his career. They’re both instant classic performances, and in such completely different ways, illustrate his underrated range as an actor.

Of course, as with all of Gray’s films, the craftsmanship here is top-notch. The delicate use of color in different sections of the film from the black-and-white of the moon to a rusty red of Mars and beyond makes for a mesmerizing visual palette, and the cinematography by Hoyte Van Hoytema sometimes echoes his work on “Interstellar” in how it balances extreme close-ups of masked space travelers with the vastness of space. Also particularly effective is the score by Max Richter, which is somehow both intimately eerie and grandiose at the same time.

We are in an era of what some are calling highbrow sci-fi as films like “Gravity,” “Arrival,” and “Interstellar” make high profits and reap major awards consideration. Neither seems likely for “Ad Astra.” It’s a bit too strange to be a major box office hit, and it’s being released by a studio in flux as it transitions to Disney ownership. Still, time will be kind to Gray’s film. It may take place in the future, but it says something that will always be current about our quest for meaning in a world in which it sometimes feels like that which we used to believe in and rely on no longer comforts us in the same way. "Ad Astra" is deeply moving with lines and ideas in its final scenes that worked on my emotions in ways I wasn’t at all expecting. Be patient with it. Invest in it. The destination is worth the journey. 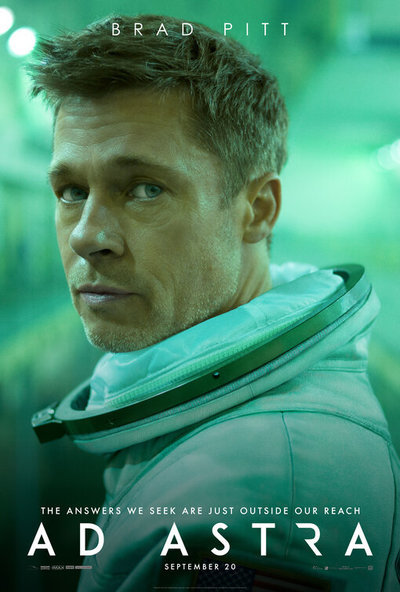 Rated PG-13 for some violence and bloody images, and for brief strong language.