“A Muse,” a modest epic about young artists in Europe, was made two years ago and released last week. But it feels as it it arrived via time warp from the late 20th century, the waning days of cinema as a self-contained event that you left the house to see and then talked about in a coffee shop or bar afterward. It’s the sort of movie that made me want to write about and make movies 30 years ago—part of a legacy of European art cinema and English language films that were inspired by them, stretching from the 1960s through the ‘90s and into the present.

The writer/director/editor, Jimmy Bontatibus, is a 24-year old American who has spent much of his young adulthood making films in Europe, where he briefly attended Bela Tarr’s film school. His unusual career arc explains why this movie feels like a bridge between continents and eras even if it wasn’t meant as such. Like Philip Kaufman’s adaptation of “The Unbearable Lightness of Being,” a work it sometimes echoes, “A Muse” feels American and European at the same time. It’s the kind of movie where gorgeous young creative Europeans talk about art and politics in the context of their lives, while fretting about relationships that are bound up in their work.

Jumping between timelines in a non-linear, often impressionistic way, “A Muse” is set in Germany (mainly Hamburg) and Romania (Bucharest and the small town of Cata) with side trips into 1961 Paris (via documentary footage of an artist that one of the characters is fixated on). All the narrative strands pass through the character of Adrian (Rares Andrici of “Graduation”), a filmmaker and artist who is as manipulative and inaccessible as he is cultured and handsome.

Adrian is defined against, and by, two women. In 2018 Hamburg, Adrian casts a spell over Mia (Mersiha Husagic, of Bontatibus’ debut feature "Life of Flowers"), a Bosnian-born, bisexual dancer who fears she’ll never live up to the standards of her famous actress mother. Adrian invites Mia to join his troupe of actor-dancer-artist types (several women and one man) who meet regularly to explore how art mirrors and informs life. They do this by creating false profiles on Tinder, bringing their dates to the same bar on the same night, then telling the troupe what happened and what they learned about themselves. It's almost like a reality show where the most important action isn't filmed. Eventually Mia and others in the group develop misgivings about Adrian, who starts to seem more like a cult leader than a teacher or impresario. Adrian even interviews his pupils on camera after their "dates," in a half-searching, half-invasive way, in a room whose lighting evokes an icy Canadian horror film where bad things happen to people’s bodies.

This material is intercut with the 2015 Romanian timeline, which observes Adrian in a relationship with another filmmaker, Bianca (Miriam Rizea of John Boorman’s “Queen and Country”). Bianca is directing a documentary that invites citizens to imagine the the future of their country, with Adrian serving as cameraman and collaborator. This timeline’s Adrian can be mysterious and difficult, but he doesn’t have the Heathcliff-on-the-moors vibe of the Adrian that Mia meets three years after. Much of the 2015 timeline follows Bianca as she tries to understand why Adrian is reluctant to have sex with her and keeps disappearing for hours at a time. The answer turns out to be just what you’d expect. But this part of “A Muse” is less a portrait of a young man in denial about his sexuality than an examination of how artists use art to hide from themselves, stop others from seeing who they really are, and inflict their pain on the world.

And it’s here that we need to detour into the work of French painter, performance artist, judo expert, and Nouveaux Réalistes figurehead Yves Klein, the main focus of the third timeline, 1961 Paris. Klein (seen in documentary footage) sought to “liberate color from the prison of the line.” He was most famous (or notorious) for a performance art piece wherein women slathered their naked bodies in paint and smeared a canvas with it while people in formal wear looked on. The Adrian we observe in 2018 has styled himself on Klein; remove the only other man from his group and he’d have a platonic harem of women, like Klein’s paint-smearers. As the story moves through time, we see how his obsession took root.

Klein is also responsible for a unique shade of paint, the “bluer than blue” IKB, or International Klein Blue. Blue and Klein’s other favorite color, gold, is integrated into the production design of “A Muse.” A scene midway through the film discusses the symbolism and emotional impact of blue while a couple lies on a bed, their bodies bathed by blue light from a projector. Another scene near the end, which I won’t describe here because it’s such a charmingly grand final gesture, puts that bit of color theory into practice.

As you’ve no doubt gathered, this is a lot to take in. Bontatibus doesn’t make it easy. Cross-cutting like Edward Scissorhands sculpting a hedge, shifting forward and backward in time within the space of moments, and blending documentary and news footage into a fictional narrative, he’s made a little movie that carries itself like a gigantic international European-American co-production, directed by a known quantity who’s made ten features rather than two. There are points when “A Muse” disappears into its own navel and you can barely figure out what’s going on, much less what it’s trying to say. The editing during the first half often sometimes seems to be cutting all the time because it can—or because that’s what some contemporary large-scale art cinema auteurs (including Christopher Nolan and Terrence Malick) like to do. Christopher Day's spare but emotionally resonant score helps smooth out and unify sequences that might otherwise play as disjointed, and the cinematography, by Adrian Iurchevici and Roxana Reiss, infuses every interaction with a sort of enchanted documentary feeling, which prevents the most highfalutin conversations from falling into an abyss of self-importance.

In the second half, “A Muse” settles into a more patient, hypnotic groove, letting moments play out at greater length, and cutting to intensify meaning. But the entire thing is of a piece, the first half planting seeds that will bloom in the second; whatever issues one may have with how information is communicated, you can’t say that it wasn’t provided. The ending, in particular, wouldn’t have nearly as much impact if the film hadn’t insisted on delivering crucial bits of information in its own idiosyncratic language and at its own speed, and while I’m sure its poker-faced sincerity would be laughed off the screen by cynics, I doubt cynics are the director’s target audience. This is the kind of movie that seems at risk of spinning out of control at any moment.

But as problems go, isn't that one that every movie ought to have? If you never get up on the tightrope, you'll never fall. What’s important here isn’t mastery of theme or subject, but mastery of voice. “A Muse” is aces in the second department, and considering how much it’s trying to do and say—dealing in ideas that run adjacent to each other more often than they overlap—it’s a triumph. Devotees of art house cinema’s greatest hits will recognize key influences, including Patrice Chereau, Cristian Mungiu, Krzysztof Kieslowski, Rainer Werner Fassbinder, and early works by Jean-Luc Godard (strong Anna Karina vibes from Husagic), Paul Thomas Anderson, and Steven Soderbergh (Adrian could be a next-generation version of James Spader’s filmmaker-manipulator character in “sex, lies, and videotape”). But the end result strikes notes that are unique, and they seem to have been arrived at through intuition and trial-and-error rather than by sticking to a film reference playbook. What this filmmaker still has to learn can be picked up through experience. What he knows can’t be taught.

The three leads are superb. Husagic and and Rizea create fully lived-in characters who seem like the sorts of striving young artists that you could meet in any major city in the world, while Andrici succeeds at making a furtive, damaged person endearing enough that we understand why others would find him attractive even when they know he’s using them. Late in the film, there’s an exchange of close-ups of Husagic and Andrici on a Hamburg street at night that’s a magical evocation of what it feels like to fall in love. I fell in love with the earnestness, hunger, and vulnerability of these characters, who are intoxicated by what art can do. The title applies to all of them. 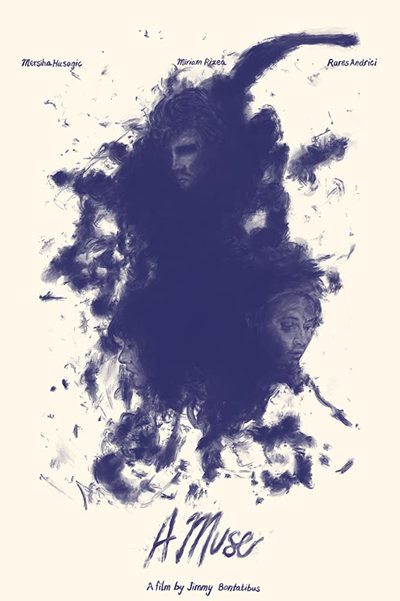