A fascinating and fastidiously complex study of one man’s moral choices at a crucial juncture in his life, Cristian Mungiu’s “Graduation” is a thoroughgoing masterpiece which offers proof that Romania’s cinematic upsurge remains the most vital and important national film movement of the current century.

Like other Romanian masterpieces, the film seems to reflect an ongoing concern with the nation’s fate since the collapse of Soviet Communism and the Ceausescu regime in 1989. While that historic turning point freed Romania from one form of oppression, these films probe the sense that ghosts of the old regime still haunt its successors and that elements of corruption have been internalized to the point that they’re not just social but individual as well.

Mungiu’s protagonist this time is a doctor named Romeo Aldea (Adrian Titieni), who is about to turn 50, which means that he’s reached a certain mid-point in life: young enough to have an aged mother needing his attention, old enough to have a daughter about to graduate from high school. Other signs of mid-life’s challenges: he’s got a wife who’s as romantically alienated from him as he is from her and a mistress who’s threatening to end things if he doesn’t leave the wife for her.

Of these four women, it’s the daughter, Eliza (Maria Dragus), who becomes the film’s dramatic crux as the story begins. One day after Romeo drops her off at school, a stranger drags her into a nearby construction site and attempts to rape her. The attack leaves the girl badly shaken and with one arm in a cast. But the real problem is that it also renders her potentially unable to ace an especially important final exam, one that may determine whether she’ll be able to accept a scholarship at a British university.

This turn of events shakes Romeo far more than it does Eliza. She has a boyfriend here and seems rather blasé about whether she goes to school in Romania or abroad. Her father, though, is totally invested in the idea that she will escape to England, and this is one area where he and his wife still have a common cause. When they were younger, the couple left Communist Romania for the West, and Romeo evidently regrets that they moved back; in his eyes, Eliza’s salvation will also be his redemption.

The doctor considers himself to be a highly principled man, more so than much of the society that surrounds him. But when Eliza’s exit from Romania falls into jeopardy, his personal morals start to waver. He knows strings that can be pulled to help the girl get past that exam, and he begins tugging at them. And yes, this inevitably recalls Lenin’s statement about breaking eggs to make an omelet, and thus the whole Communist ethos of the ends justifying the means.

Romeo’s surreptitious campaign brings him into contact with a small array of policemen, bureaucrats and other doctors who know the system can be gamed, and who are used to gaming it themselves or turning their heads while others do it. In addition to drawing a bead on corruption at the systemic level, these characters offer a striking and memorable portrait gallery of a certain slice of Romanian officialdom at this moment in time.

As in his earlier films, including the Palme d’Or winner “4 Months, 3 Weeks and 2 Days,” Mungiu employs a patented style that involves long takes (many scenes entail only a single shot) and eye-level widescreen compositions. The effect is of a crisp, unblinking intentness, one that induces the viewer to pay attention to the characters, their words and interactions from a natural, unforced remove. A form of realism this surely is, though its steadfast clarity almost takes us into the realm of the hyper-real.

Much as he does on the visual level, Mungiu proves his verbal mastery with a kind of unshowy exactitude in the scripting of characters as well as individual scenes. The people of “Graduation” are all very believable, both persuasively Romanian and recognizable to anyone in the middle-class West. Which is to say that Mungiu shows us lives that reflect certain looming social forces but that also are too messy and individual to add up to neat moral lessons.

Yet it’s hard not to be impressed with a filmmaker who so precisely fillets the moral choices of people and the society they inhabit. And what a timely film for American viewers to encounter right now, when moral inquiries and understandings seem as foreign to the multiplex as they do to the White House. We can only hope that some of our filmmakers will take a cue from Mungiu’s brilliantly incisive interrogation of his homeland. 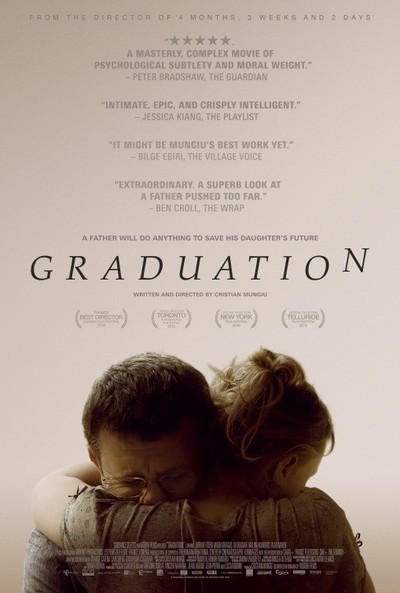