A Fall From Grace

“A Fall From Grace” is Tyler Perry’s first movie for Netflix, which might suggest a certain amount of polish that’s typically lacking from his prolific filmography. But while the performances are stronger and the narrative is more coherent than you’d see in a “Madea” movie, for example, Perry’s latest still features many of the auteur’s trademarks: dizzying tonal swings, awkward blocking, drab lighting, jarring edits and a mixture of the salacious and the puritanical.

In short, it’s nuts. And while it’s available to watch at home through streaming, it’s the kind of movie that’ll be way more enjoyable with an audience because there are so many opportunities to scream at the screen, especially as the movie reaches its twisty, increasingly insane climax.

This is what you want from Perry, though, as writer, director, producer and co-star. “A Fall From Grace”—which the filmmaker reportedly shot in just five days at his Atlanta studio—revisits some of his preferred, melodramatic themes. A law-abiding, God-fearing woman is wronged, and she summons the strength to make things right. The perpetrator is a handsome man who, inevitably, will end up shirtless. Everything will wrap up way too quickly (even though “A Fall From Grace” is all of two hours long) and you will have some questions afterward, such as: How did that character get out of those handcuffs?

But first, the movie begins abruptly with a literal fall. A distraught, elderly woman plunges to her death from a rooftop, with negotiators and police unable to stop her. One of those officers, Jordan (Matthew Law), is married to Jasmine (Bresha Webb, who also appeared in Perry’s “Acrimony”), a young public defender who’s about to take on a challenging case of her own. A woman named Grace (Crystal Fox) has been charged with murdering her husband—and she’s confessed to the crime. All she has to do is plead guilty, according to Jasmine’s gruff and callous boss (Perry, proving again as he did in “Gone Girl” that he can do solid work as a serious actor).

It’s not that easy, though. The deeper Jasmine digs into the facts of the case with Grace, the more questions she has about what really happened. Perry flashes back and forth between these jailhouse interviews and the whirlwind romance the divorced, middle-aged Grace enjoyed with the hunky, much younger and now-deceased Shannon (Mehcad Brooks). The two met when Grace attended a gallery exhibit of Shannon’s photographs at the urging of her best friend, Sarah (Phylicia Rashad). He’s gorgeous, charming, attentive, too good to be true—and anyone paying even the slightest bit of attention themselves will be able to figure out the broad strokes of where this is going pretty quickly.

Fox is a veteran actress who’s never played a leading role, and kudos to Perry for giving her the chance. (She currently has a supporting part in the Perry-produced soap “The Haves and the Have Nots,” and she was chilling as Zoe Kravitz’s mother on “Big Little Lies.”) Fox brings warmth and grace—no pun intended—to the role, and a naturalism and vulnerability despite the increasingly extreme circumstances her character endures. And her initial interactions with Rashad, another veteran actress who’s overqualified for this material, are quite lovely and real. Along those lines, the legend Cicely Tyson has a brief but pivotal role as a mysterious tenant in Sarah’s building, and while there’s not nearly enough of her, let’s just say she leaves an impression (and inspired some of the most vocal audience reactions during a recent screening).

But what initially seems like a rather straightforward, low-budget cautionary tale about the perils of trusting a seductive stranger eventually becomes a wild story that tries to encompass broader economic dangers, and the film’s reach exceeds its grasp. The underlying theme is more complicated than the treatment it gets here. And yet, Perry still insists on giving the people what they want—thankfully. The shift from substantive social drama to violent and volatile thriller is a shocking one, but it also makes “A Fall From Grace” a whole lot more enjoyable. See it with friends who have a sense of humor. 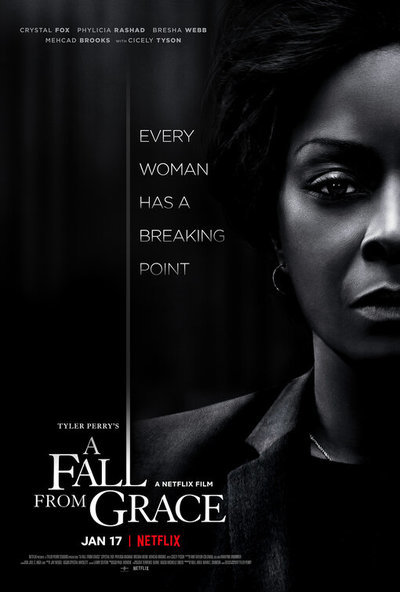