With its makeshift family, high-speed car chases, and elaborate heists, Netflix’s action blockbuster “6 Underground” is solid proof that Michael Bay would love to direct a “Mission: Impossible” or “Fast and Furious” movie. It also makes it clear why that would be a bad idea.

You have to give Bay credit for making a movie that is distinctly his brand. Anyone familiar with the “Bad Boys” or “Transformers” franchises need only see about five minutes of this one to recognize it as a Bay joint. There are the requisite shots of beautiful women from a ground angle, jokes that even the writers would probably say are in bad taste, hyper-kinetic cuts to pop/rock tunes, and nary a thing that resembles human emotion or the actual physics of the real world. And, for a while, especially during an extended car chase through Florence in the film’s lengthy opening, the Bay-ness of it all is kind of engaging. The ridiculousness of the opening sequence has a critics-be-damned insanity to it that’s almost impressive. As Dave Franco’s getaway driver speeds through the city, he nearly runs over a woman with a baby, a couple cute dogs, and even some nuns, who then proceed to flip him off. There’s a sense that Bay and writers Paul Wernick and Rhett Reese (who co-wrote the "Deadpool" movies) are embracing the hyperactive action fan out there who's tired of Oscar fare like "Marriage Story" and "The Irishman," and saying, “We know this is dumb fun, but let’s just put logic aside for a couple hours. Turn your brain off and just enjoy it.” Sadly, like the ragtag group at the center of the film learns, even the best plans can be hard to follow.

“6 Underground” is about an eclectic billionaire (Ryan Reynolds)—it’s implied he invented the vibration you feel when you get a text or call—who has faked his own death to go underground and lead a team of similar mercenaries, people who are able to go off the grid to do the jobs that world governments refuse to do. In a film that’s clearly designed to be the start of a franchise, their job is nothing less than a military coup, deposing the vicious leader of the fictional country of Turgistan and replacing him with his more peaceful brother. To do so will mean murdering dozens of people in high-powered action scenes that are all vaguely reminiscent of things Bay has done in films like “Bad Boys II” and “Transformers” (he even gets a chance to use the robot sound in his climax). Just know that nothing is simple, everything will involve explosions, and the body count will crest three figures.

The team, known only by their numbers—Reynolds is #1—also includes a deadly CIA spook (the movie’s best performer by far in Melanie Laurent, who can bring depth even to something like this and I would totally watch in a spin-off series), a wisecracking hitman (Manuel Garcia-Rulfo), a sky-jumping kid who is introduced running down the outside of the Duomo (Ben Hardy), a former sniper battling PTSD (Corey Hawkins), and a woman with so little character that I couldn’t really tell you her specialty (Adria Arjona). The excellent Iranian actor Payman Maadi (“A Separation”) plays the brother who the team has to exfiltrate and place in power.

If you’re wondering how “6 Underground” handles Middle Eastern politics, it’s with all the grace of a runaway truck. The scenes in Turgistan, including an early one in which children are bombed in a chemical warfare attack and a late one that’s meant to reflect the Arab Spring, are poorly executed at best and offensively exploitative at worst. One almost longs for a giant robot to pull Bay and company away from issues that arguably shouldn’t be used for B-movie action fodder, or at least shouldn't be in a film that pushes the boundaries of cartoonish action choreography.

It’s one thing to see Reynolds nervous that his driver is going to hit an Italian dog; it’s another thing to see children bombed in a refugee camp. I don’t think the makers of “6 Underground” really see the difference. And the sense that this film is tonally disastrous continues to mount, especially as the initial jolt of stylized action becomes numbing instead of entertaining, and the film keeps flirting with real-world issues it doesn't understand.

Before we get up in arms about what's "allowed" to be in an action movie, whether or not the subject matter rubs you the wrong way doesn't really matter because the main purpose of a film like “6 Underground” is to entertain. No one is really arguing otherwise. (I just don't find reflections of the last decade in Syria entertaining.) Most important, the film simply comes apart under that basic definition of its purpose. It becomes repetitive, nonsensical, and just loud after everyone gets an origin story and we're left with nothing to do but go boom. At the end, one of the characters even seems to understand that this is how most viewers will feel after watching, saying that this team can still “do some shit … awfully loud.” “6 Underground” is definitely some awfully loud shit. 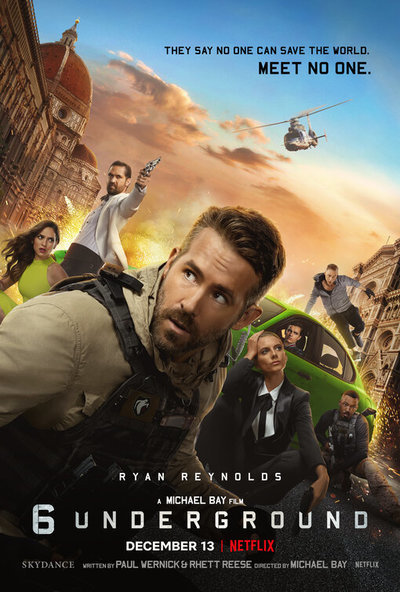 Rated R for strong violence and language throughout, bloody images and some sexual content.

Ryan Reynolds as One