Divorce is described in Noah Baumbach’s masterful “Marriage Story” as like a death without a body. Something has been lost. There is grieving, anger, denial. In his personal and moving story, Baumbach captures the insidious nature of divorce, how two well-meaning people who still care about each other will do things they would never think they would do. Surely, you’re not the kind of person who would use secrets as a weapon in a divorce case? You wouldn’t turn a child against a parent to gain an advantage? It’s other people who do stuff like that. With remarkable grace and compassion for his characters, Baumbach portrays divorce as a great equalizer, turning us into versions of ourselves we didn’t expect to become.

Baumbach opens with each of his protagonists reading a piece they wrote for a mediator that highlights the strengths of their partner. So we hear about the personality of Nicole (Scarlett Johansson), someone who listens too long to strangers, loves playing with her son Henry, cares for her mother and sister a great deal, and never closes a cabinet. Charlie (Adam Driver) is a focused theatre director who is remarkably talented and creative. He eats like someone is going to steal his food from him and is overly competitive. These may seem like nothing details, but they reveal the depth of specificity throughout “Marriage Story.” Baumbach is not interested in a film that tells every story of divorce, he wants to get this one exactly right. Charlie and Nicole are as fully realized as two people in a domestic drama have been in years.

And, despite some surprising bits of humor, this is very much a domestic drama. There have been a few separations in the past, but it appears that this one is going to take when Nicole goes to Los Angeles to film a pilot and takes their son with her. When Charlie goes to visit, she delivers the papers, as advised by her high-powered attorney Nora (Laura Dern). Charlie soon realizes that Nicole wants to move to L.A. with their son, and this becomes a major tug-of-war for the two of them. He has to constantly go back and forth between a play he’s trying to stage in New York and the increasingly rancorous proceedings in L.A. And everyone starts to fracture and become different versions of the people they were before.

It would have been so easy to make a version of this story in which there’s an obvious villain—put us on one side and allow us to root for an outcome. What Baumbach is exploring is the truth that there is no “good” outcome in divorce. There's rarely a way to make everyone happy. Sure, Charlie cheated and ignored Nicole’s needs, but she’s also basically trying to steal his son to the other side of the country. Some will pick a side, but I firmly believe that the movie works better if you don’t—if you can see the good and evil in both Nicole and Charlie.

And it’s easy to do that with these stunning performances. Driver and Johansson have both been remarkable before, but this is a new career watermark for both, repaying Baumbach’s trust in them with emotional and complex work. They’re good throughout, but they each get a “scene” on their own—a background speech from Nicole when she first goes to Nora and a breathtaking one from Charlie at a bar near the end—and a scene together, the big fight that we never think will happen with our partners. The one where we say what we shouldn’t say. The one where things change forever.

The two leads own the film, but Baumbach’s skill with ensemble has become remarkable over the years, and this is his best work. There are minor parts from great performers like Merritt Wever, Wallace Shawn, and Ray Liotta, along with a memorable supporting turn by Alan Alda as Charlie’s attorney, an old soul who has seen the pain divorce can cause (he’s had three of them). And then there’s Dern, who continues to stake her claim as one of the best working actresses. Even she gets a “scene”—this one about the gender inequality in the way women and men are portrayed in divorce—that tears the house down.

In 2005, Baumbach made a film that’s essentially about the divorce of his parents called “The Squid and the Whale.” That was from a child’s perspective. Almost 15 years later, it feels like he’s matured to a point where he’s willing to see the issue from the other side. And whereas that film has some notable anger, this one feels much more compassionate and understanding of human fallibility—the product of a mature, masterful filmmaker. What comes through in every frame of this film is that Baumbach loves Nicole and Charlie. And we come to care about them a great deal too. When we say goodbye to this pair, we hope that they both find happiness, reaching for life after the death of divorce. 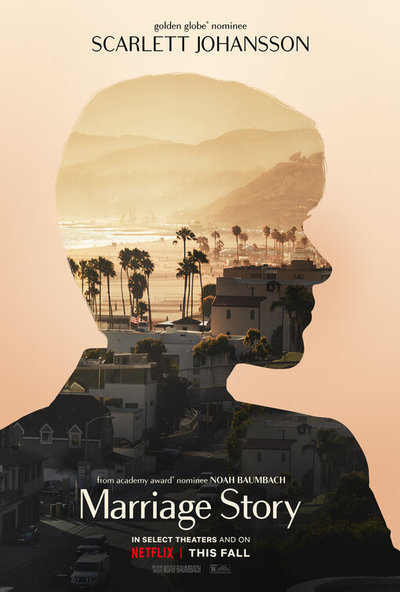