“Hi y’all!” cheerily replied Jamie Lee Curtis while taking the stage Thursday night at the Hollywood Foreign Press Association’s annual Grants Gala at the Beverly Wilshire Hotel in Beverly Hills, California. “Isn’t this fun? This is what all of show business should be.” The relaxed demeanor and infectious gaiety Curtis exuded set the tone for an evening refreshingly devoid of the usual pressures and tensions that plague star-studded events of this caliber. No awards were handed out and everyone left a winner.

“I love, as the [HFPA] loves, this confluence of art and commerce that I like to refer to as show-off business,” Curtis replied, while praising the HFPA for recognizing excellence in dramas as well as comedies and musicals during their annual Golden Globes ceremony. Yet what she loved, above all, was how the organization “puts their money where their mouth is” by giving over $2 million to non-profit entertainment-related organizations, foundations and scholarship programs. “If you wanna have a party, and you wanna give away $2 million, Lady Gaga’s coming to your f—king party,” Curtis declared to rousing applause.

If you ask anyone what the Hollywood Foreign Press Association does, they will mention the Golden Globes. But despite the fact that they have been giving away grants that number an estimated $24 million dollars over a period of 20 years, this remains the most closely guarded secret in Hollywood. No more, not after the celebrity studded dinner last night. Even the HFPA's new president Lorenzo Soria acknowledged that more needed to be done to publicize the good works the organization does. And so celebs came out in numbers to do just that.

Nick Jonas opened the evening by serenading the audience with his rendition of Louis Armstrong’s immortal song, “What a Wonderful World.” When Lady Gaga finally appeared onstage, she immediately earned laughs by offering a disarmingly candid confession. “I’m a little embarrassed because when Jamie Lee Curtis said my name, I snarfed an olive into my nose,” Gaga admitted. “And there’s a teeny, tiny piece that’s still there.” But then her talk turned serious when she said she had attended the sort of performing arts studios that are supported by the HFPA. And "they're WEIRD places," she said to laughs and applause. 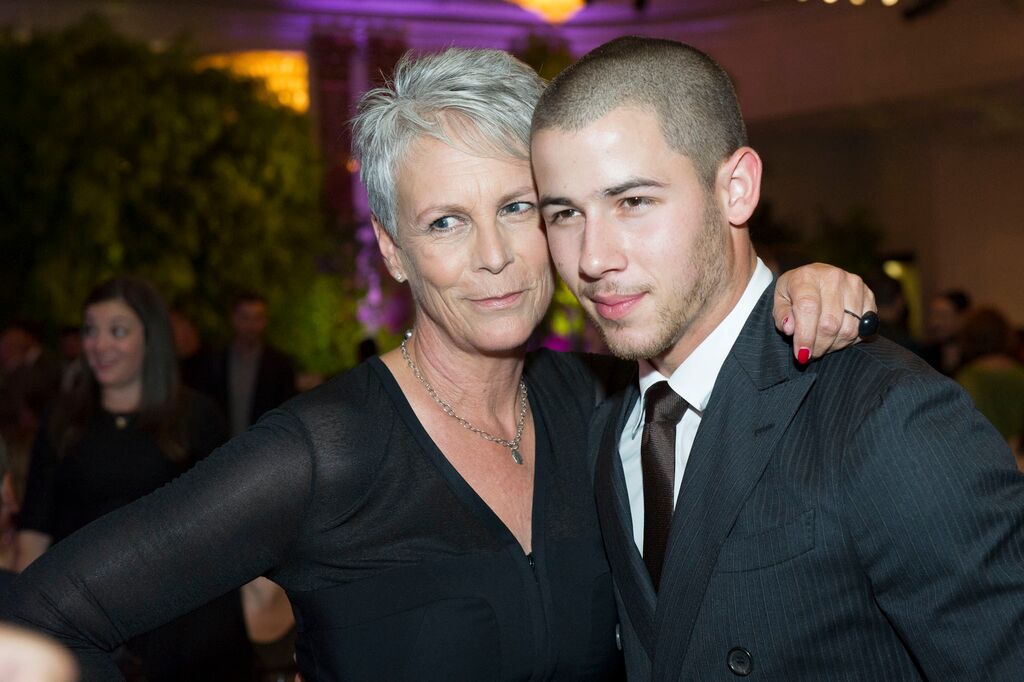 Unscripted moments like these resulted in many of the night’s most memorable moments. After flubbing a line while squinting at the teleprompter without glasses, Halle Berry shrugged and said, “I’m turning 49 tomorrow.” When Jane Fonda introduced “Sicario” stars Emily Blunt and Benicio del Toro, they initially failed to show up, leaving the actress stranded onstage. Luckily, she took this gaffe as an opportunity to improvise, musing on the “unreliable” glint in del Toro’s eyes. 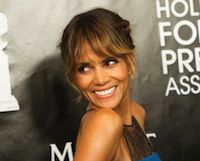 Once Blunt and del Toro made it to the microphone, their eyesight proved to be exponentially worse than Berry’s, and their self-deprecating presentation transformed into an uproarious comedy sketch that ended up stealing the entire night. Blunt and del Toro milked the full potential of their impromptu routine, and eventually received sardonic handshakes from audience members, including a visibly amused Jon Hamm and Jake Gyllenhaal. Another hilarious duo was Joe Manganiello and Brie Larson, the latter of whom appeared at Roger Ebert's Film Festival (a.k.a. Ebertfest) two years ago for a screening of Destin Cretton's powerful drama, "Short Term 12."

Yet there were also moments of sincere emotion throughout the show, as celebrities spoke from the heart about the importance of these grants. America Ferrera said that she was honored to hand out grants that will help “make up for the unfortunate lack” of the arts in the Los Angeles Unified School District. “Without the arts programs in my own schools, I don’t know what outlet I would’ve found to express myself and find my career,” Ferrera said. Ice Cube also mentioned that he was a product of the Los Angeles Unified School District when he and his son O'Shea Jackson, Jr., presented a grant while discussing their new movie, "Straight Outta Compton." 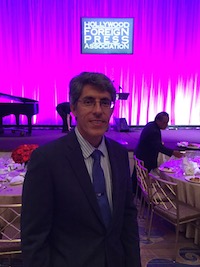 Dan Smith, a professor of television at Mt. San Antonio College, told RogerEbert.com that the $5,000 grant from the HFPA will be crucial in enabling his students to attend universities, since 72 percent of the campus can’t afford the tuition. “We encourage our students to go wherever they can to further their education,” Smith said. “We have a student that got into NYU, which is a great film school. It’s $27,000 a year, and the student will need assistance to avoid ending up in debt. I hate to see students drop out when they’ve earned their spot at these colleges.”

Jake Gyllenhall reflected on the joy he felt after watching Charles Vidor’s classic 1952 musical, “Hans Christian Anderson” with his three-year-old daughter. This experience affirmed for him the vitality of film preservation, as it was one of his childhood favorites. He presented one of the biggest grants of the evening to Martin Scorsese’s Film Foundation, an organization dedicated to the restoration of cinema. Though Gyllenhaal also accidentally earned laughs by stating that the HFPA has helped restore “over 90 million films,” before correcting the tally to “over 90.” “That’s what they’re hoping to do,” he quipped. 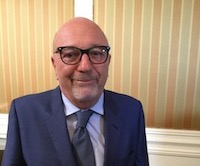 HFPA president Soria spoke with RogerEbert.com on the red carpet about why film preservation plays a crucial role in the preservation of our own culture. “Just as it is important to preserve the pyramids or books from the 1600s, it is also important to preserve the movies and television shows that make up our culture,” Soria said. “A thousand years from now, we will be defined by the movies we were watching.”

A prime example of films currently reflecting the culture in which they were made is Peter Sollett’s “Freeheld,” due out October 2nd. It recounts the fact-based story of a lesbian couple, Laurel (Julianne Moore) and Stacie (Ellen Page), and their struggles to secure Laurel’s pension benefits after she is diagnosed with cancer. The result of the June 26th Supreme Court ruling that ultimately legalized same-sex marriage nationwide was a giant question mark during production.

“The feeling that we had on set with the actors was that either we were going to have a film that reminded everyone of how we arrived at marriage equality in this country and why we need to defend it, or it was going to be a film that told us why we needed to continue fighting for equal rights,” Sollett said. “Fortunately, as it turns out, it’s a film that reminds us how we got here and why we need to continue protecting equal rights for everyone. It’s thrilling to be on the cutting edge of something like that. Films aren’t always in that position.”

Ebertfest was the recipient of a $10,000 scholarship presented by Topher Grace and Dakota Johnson. It was to further international understanding through film. Grace told Chaz Ebert that his parents were introduced by film critic Bosley Crowther, and that as a result, he grew up in a home containing volumes of film criticism, so he was a proponent of Ebert's writing.

Among the films that screened at this year’s installment of Ebertfest was Ramin Bahrani’s “99 Homes.” It opens on September 25th, and reflects issues of modern economic inequality in such a provocative way that it is guaranteed to trigger a vital debate among moviegoers. The film’s star, Andrew Garfield, was also among the presenters at the HFPA gala. He told me how he had met with people who found themselves in the exact same predicament as his character, who goes against his own moral code in order to ensure the financial stability of his family. Garfield also made a point of mentioning that he found “Life Itself,” Steve James’s acclaimed documentary about Ebert, “so beautiful.”

Another presenter, Jason Isaacs, spoke about the tremendous impact films can have on audiences, singling out an example from his own career. He’s surprised by the number of people who have talked to him about his brilliant scene in Rodrigo García’s 2005 drama, “Nine Lives,” where he and Robin Wright play former lovers who coincidentally cross paths in a supermarket. 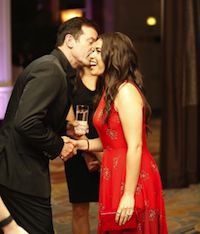 “Rodrigo is a magnificent writer, and the fact is, when you have access to writing like that, it acts itself,” Isaacs said. “It was a 15 or 16-minute unbroken piece, a single Stedicam shot. Films are often shot in such tiny increments that it’s really a director’s medium because they get control of the edit. Since this scene was done in one take, it really felt like we were a team. It was this extraordinarily human, emotional sculpture. Robin and I jumped on it and by the end, we had no idea what had just happened to us. It turned out to be some of the finest stuff that I’ve ever seen—forget that I was even in it.”

“You want to affect people with your work, and so many people have talked about their first love to me, and how you can be transported in a situation, forget about the circumstances of your life, and go off with someone you had just met or used to be with. That is the power of great writing. You are constantly in search of good writing, and maybe three or four times in my 30-year career have I come across writing like that. You treasure it.” 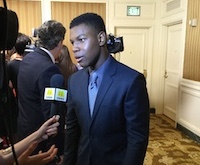 Speaking of moments to treasure, “Attack the Block” star John Boyega reminisced with me about the chance encounter that eventually put his career into light speed, jettisoning him to the top of the A-list after he was cast in “Star Wars: Episode VII—The Force Awakens.” The movie is set to galvanize the box office upon its December 18th release. “J.J. Abrams saw me and was like, ‘You’re Moses from ‘Attack the Block’! I loved you in the movie. We’re going to get you in something.’ That was four years ago. He wanted to put me in something, and it just happened to be ‘Star Wars,’” Boyega said. The actor also pointed out that there is a key correlation between “Attack the Block,” Joe Cornish’s 2011 cult favorite about teenage gang members battling aliens, and “Star Wars.” Both of them are “coming-of-age stories about characters who are asked to be greater than they are.”

What distinguished the HFPA gala, above all, was the spirit of generosity that invigorated the night’s proceedings, from the grant-giving at the podium to the countless priceless moments occurring backstage. There was an especially lovely sight that occurred at the tail end of the red carpet. Jamie Lee Curtis asked Jake Gyllenhaal to pose for the lens of a pint-sized aspiring photojournalist, who appeared to be not a great deal older than his own daughter. Naturally, he obliged. If only all of show business were like this.