“Straight Outta Compton” is a biopic with unexpected, seemingly conflicting goals. It aims not only to raise your ire, but to also break your heart. It is as engaged with its well-executed action scenes as it is with its moments of tenderness and quiet. It is unrepentant in its anger and its amorality, leaving the audience to pass its own judgement and calibrate its own outrage. The filmmakers have made a fiercely political movie that’s an equally fierce “talk back to the screen”-style crowd-pleaser for folks eager to hear the tale of an influential rap group. “Straight Outta Compton” is a reminder that the biopic genre held the patent on the cinematic origin story long before the Marvel Universe; it plays like a Marvel superhero movie had Marvel been run by Suge Knight.

This film’s Guardians of the West Coast Rap Galaxy are the original members of N.W.A., MC Ren (Aldis Hodge), Dr. Dre (Corey Hawkins), Eazy-E (Jason Mitchell), DJ Yella (Neil Brown, Jr.) and Ice Cube (O’Shea Jackson, Jr, doing a great job playing his Dad). We follow them from their humble beginnings to the height of their fame, stopping along the way to hit the expected milestones and musical cues. While “Straight Outta Compton” samples the familiar biopic beats, it surprises by spitting some new lyrics atop them. There’s a lot more complexity here, both in the storytelling and the occasional shifts in tone. Sometimes the film looks like a rap video, filling the screen with scantily clad women and bling. At other times, it evokes an almost meta recreation of '90s dramas like “Boyz N The Hood,” which was shot in the same city with one of this film’s characters.

The release of “Straight Outta Compton” coincides with the 27th anniversary of the eponymous debut album. Ushering in the era of gangsta rap, the album earned millions of fans and hearty record sales, opening the floodgates for West Coast rappers. The record also quickly courted controversy with its profane, violent lyrics, earning one of Tipper Gore’s “parental advisory” labels and a threatening letter from the F.B.I. The fed’s involvement had to do with “Straight Outta Compton”’s controversial second track, a rather stinging commentary on law enforcement interaction with the minority community entitled “Fuck Da Police”.

Screenwriters Jonathan Herman and Andrea Berloff invoke the old adage that rap music is “CNN for brown people” by fearlessly presenting the environment that fostered that song. There will be many thinkpieces written about the depiction of the LAPD in “Straight Outta Compton,” and the film makes no apologies for drawing a correlation between events that transpired almost 30 years ago and the events we hear about today on an almost daily basis. The most subversive scene in “Straight Outta Compton”’s first half depicts the angry response of the group’s manager Jerry Heller (Paul Giamatti) to his talent’s treatment by the cops. Heller lashes the officers with a fury his charges would not dare to emulate, and the film makes the audience consider that Heller might unintentionally get N.W.A. imprisoned or shot.

If musical biopics teach us anything in 2015, it’s to not hire Paul Giamatti as your manager. As in “Love and Mercy”, Giamatti doesn’t have his client’s best interests at heart. In both films, he overdoes his angry scenes, but in “Straight Outta Compton,” they’re tempered by scenes of warmth between Heller and Eazy-E. Eazy’s story is the heart of “Straight Outta Compton,” the emotional arc that runs parallel to its scenes of music, raunchiness and danger. It’s Eazy-E who comes up with the idea (and the start-up cash) to try out Dre’s dream of making music, and it’s Eazy-E who seeks out a business mentor to help him keep an eye on his friends’ interests. And it’s Eazy-E who tragically falls ill just before the band tries to make a comeback.

As Eazy-E, newcomer Mitchell is asked to do some heavy lifting here, and he gives an excellent performance—the film’s best. The way he reacts to the one-two punches of betrayal by Heller and his health is gut-wrenching. He and the other N.W.A. actors have tremendous chemistry together; even when they’re at each other’s throats, one never loses sight of how much these characters care for one another. Their scenes of camaraderie never seem sappy or forced. The film’s best scene is the group’s reaction to the dis record Ice Cube made when he left the group. Their anger gives way to their contented notion that they’ve just heard a great rap record. “I kinda liked it,” says DJ Yella.

This is a very well-acted movie, right down to its smallest roles. Keith Stanfield from “Short Term 12” makes a great Snoop Dogg. Carra Patterson makes the most of an underwritten part as Eazy-E’s wife Tomica. And R. Marcos Taylor is also worth mentioning; he’s scary in a role I’d be too terrified to play, Suge Knight. Other well-known West Coast rappers show up, as do well-known events in the story, and the film treats these elements with the reverence it knows the audience craves. The way it shoehorns fan-pleasing elements into the film is at times shameless, as in the completely ridiculous way it manages to get Ice Cube to say his famous kiss-off line from “Friday”.

Director F. Gary Gray treats “Straight Outta Compton” as an epic-sized take on approaching the American Dream from an askew angle that draws straight outta Compton and straight into capitalism. As with his classic caper film, “Set It Off”, Gray briskly handles the film’s 147-minute running time. Veteran cinematographer Matthew Libatique assists by keeping things visually interesting. While there are a few minor missteps (we could do without some of the rather suspect scenes of groupie gratification, for example) overall this is a masterful piece of work. It’s funny, angry, sad and inspirational. I admired its willingness to be as unrelenting as N.W.A.’s album, and I had a great time mouthing the words to every song on the soundtrack.

If you’re not a fan of N.W.A, you’ll still find much to enjoy here. If you are a fan, you’ll love this movie as much as I did. 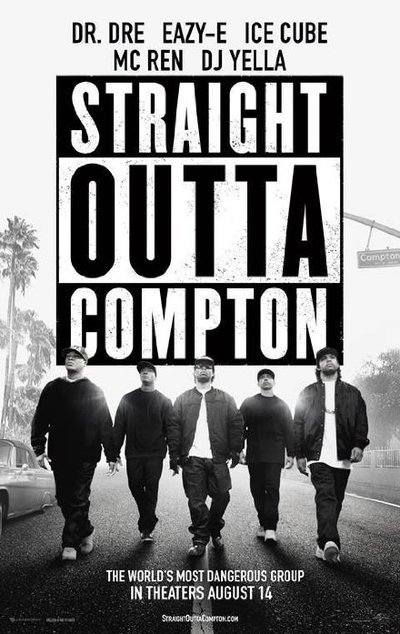 Rated R language throughout, strong sexuality/nudity, violence, and drug use