There is hardly a more unlikely movie icon than Woody Allen, the complex and sometimes controversial (at least for his personal life) writer/director/actor the French revere as "Monsieur Woodee." In person, he’s a wispy, grey little man whose dark-rimmed glasses are the most colorful aspect of his physical appearance. “I’m so youthful, nimble and spry,” the 80-year-old enthused at his Cannes press conference today, while also pointing out that he has a hearing aid in each ear. “If there’s anything to heredity, I hit the jackpot.”

Allen’s “Café Society” opens the 69th Cannes Film Festival, the third time he has scored that honor over the years. The director may feel spry and youthful, but this fifty-second directorial project of his career coasts along on life support provided largely by the brilliant production design of Santo Loquasto, and the cinematography of the great Vittorio Storaro (“Apocalypse Now,” “The Conformist”).

It’s the story of the bittersweet love affair of Bobby Dorfman (Jesse Eisenberg), a young Jewish apprentice jeweler who quits the family business in the Bronx for a new life in 1930s Hollywood, and Vonnie (Kristen Stewart), the fresh-faced former Nebraskan who works as assistant to Bobby’s uncle Phil (Steve Carell), a successful Hollywood agent. 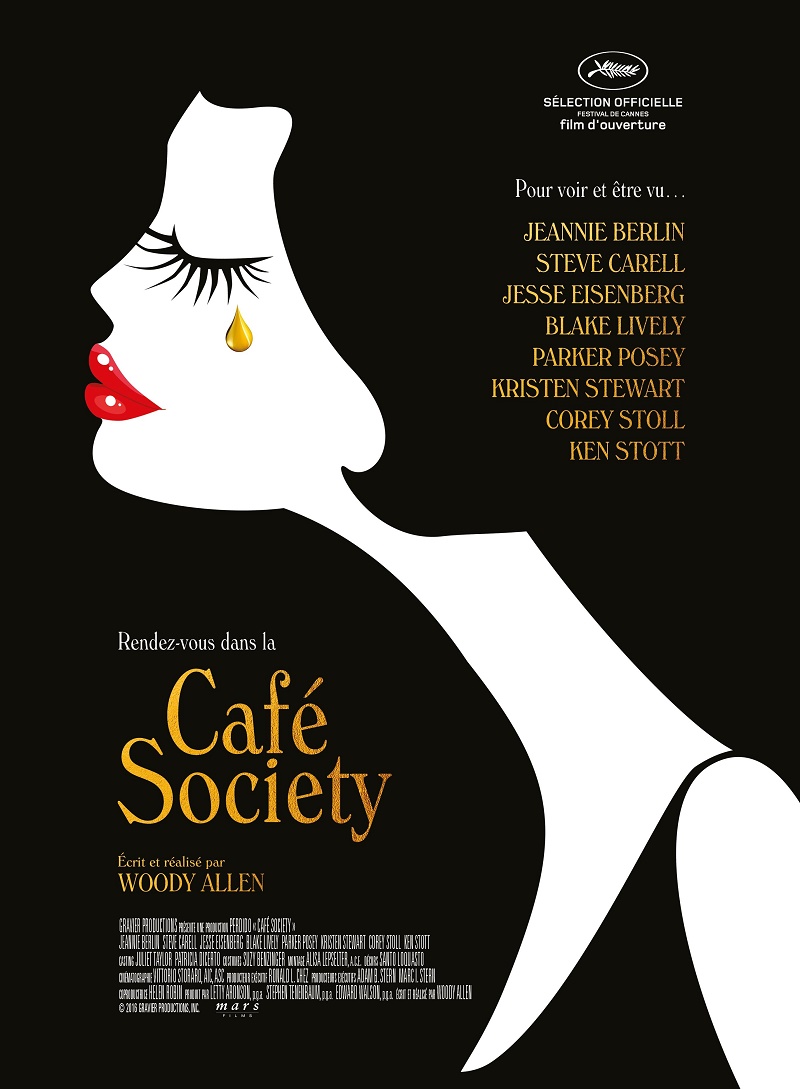 According to his own description of the film at the press conference, “Café Society” is meant to suggest the structure of a novel, with the voice of the author (Allen narrates) stitching together the multiple subplots of a sometimes farcical family saga in which his characters live “sad, empty lives … an existence fraught with peril, sadness and cruelty.” It sounds weighty, but it’s not, and there’s plenty of emptiness to go around, up there on the big screen in the gap between Allen’s concept and its realization.

In the course of a story in which Bobby loves, loses, and tentatively reconnects with the girl of his dreams, all of Allen’s trademark tropes come into play. Jewish jokes and references? Got ‘em, including the line “I find Jews mysterious and exotic.” Jazz? The soundtrack hammers points home with classics and favorites, assuring that we get it, get it, get it, whether it’s romance or buffoonish gangster violence.

Behind an entertaining façade delighting the eye with lavish Art Deco interiors, period hats, gowns, and hairstyles, and despite a star-studded cast that also features Parker Posey, Corey Stoll, Ken Stott, and a woefully underused Blake Lively, it’s a thin, schematic film. Much as Allen’s “Midnight in Paris” was his valentine to a city he loves, “Café Society” is on the surface a showy love letter to Hollywood’s golden era, which he conjures up with all the trappings of an ostentatious lifestyle, copious name-dropping (John Ford, Fred Astaire, Judy Garland, Greta Garbo, William Powell, Errol Flynn), and a glimpse of some landmark movie star mansions.

His beloved Manhattan gets its due when Bobby gets tired of the Hollywood life and homesick for New York. Ben (Stoll), yet another uncle, is a nightclub-owning gangster and the family’s black sheep. Bobby is soon manager of Les Tropiques, a high society joint where his transformation into a tuxedo-wearing sophisticate is rapid. So is his marriage, in which he settles for Veronica (Lively), a sweet and stunning blonde who slinks into the club one night in a silver slip of an evening gown.

The overriding message of “Café Society” is that some dreams never die. Allen’s characters keep the dream but in the end are forced to live with the choices they make. Allen dreamed the dream in theory, but settles for flash over substance.

At his press conference, Allen was asked why none of his films has ever been in competition at Cannes. “I don’t believe in competition for artistic things,” he responded. At the jury press conference later in the day, moderator Henri Behar picked up on that line, asking jury president George Miller (“Mad Max: Fury Road”) and his international cohorts including directors Arnaud Desplechin (“My Golden Days”) and Oscar and Golden Globe winner László Nemes (“Son of Saul”), actors Donald Sutherland (“The Hunger Games"), Mads Mikkelsen (“The Hunt”), Kirsten Dunst (“Eternal Sunshine of the Spotless Mind”), Valeria Golino (“Rain Man”), Vanessa Paradis (“Fading Gigolo”), and Iranian producer and film distributor Katayoon Shahabi to express some thoughts on judging their colleagues in the field.

Miller promises “a very rigorous and sincere decision.” Mikkelsen suggested that they view every film with “the eyes of the audience” rather than as filmmakers. These no-nonsense folks are clearly ready to roll up their sleeves, signaled perhaps by their plain business casual attire, with nary a diamond, sharp suit, or anything approaching a fashion statement to be seen.

These jury press conferences can be dull affairs, given to perfunctory expressions of fairness and good intentions, and this was one of the dullest in memory. What goes on behind the scenes in any given year is anybody’s guess, and there will be plenty of those guesses appearing in print in the coming days, with wild rumors flying and many claiming to have an inside track on jury discussions ... as if. Cannes steadfastly maintains the silence of a tomb in this highly secret process.

In terms of the session’s entertainment value, help was on the way as soon as Canadian Donald Sutherland took the floor. With flowing white hair and a fiercely focused gaze, he played the eccentric, bellowing, “I can tell you I’m freezing up here,” told a couple anecdotal stories, and brought the house down with a joke about a Brit, a Canadian, and a Frenchman awaiting execution. It was a promising sign that this group might deliver something wild yet.