As an actor, John Turturro is a stalwart, alert, engaging character player. As a writer/director, he’s one of the quirkiest, hit-and-miss narrative moviemakers around. (You may or may not remember his fevered musical "Romance And Cigarettes," which opened with James Gandolfini singing an Englebert Humperdink hit while garbage men danced behind him.) His new picture, "Fading Gigolo," in which Turturro also plays the title role—a fellow floridly named Fioravante—is packed with his signature soulful eccentricity from the ostensibly ridiculous premise down.

It isn’t only that Woody Allen plays Murray, Fiorovante’s lifelong pal who suggests that Fiorovante sleep with Murray’s wealthy dermatologist for money, and then becomes, well, Fiorovante’s pimp. It’s also that Murray lives with a younger African-American woman (Jill Scott) and is pretty much a father figure to her four hilarious young boys. (The back-story of this arrangement is never given, which is fine.) Early in the picture Murray has to have one of the kids’ head checked for lice, and he takes all four boys on a journey to the Hassidic section of Williamsburg, which raises some eyebrows among the locals. Now the site of white-haired Woody Allen leading a passel of young black kids along a sidewalk of black-and-white-clad men replete with payot and such may be uproarious to some. It may be appalling and even morally offensive to others. But I think everyone can agree that as a cinematic sight it is inarguably unusual.

In the meantime, Turturro’s Fiorovante, with his big soulful eyes and his sensitive lovemaking technique and quiet multi-lingual erudition and his flower-arrangement skills—the guy really is the whole package—is providing satisfaction for a wide range of women, whose ranks include Sharon Stone (splendidly understated) and Sofia Vergara (who it’s nice to see not playing a cartoon). He’s bringing in lots of dough, and soon Murray gets the bright idea to set up Fiorovante with Avigal, the relatively young and terribly lonely widow of a rabbi (and also a head lice expert, since you asked), who’s played, in the movie’s oddest casting coup, by French pop singer and actress Vanessa Paradis.

This plot development threw the sweet and odd movie off the rails for me a little while. As played by Allen, Murray is a milder, kinder, more competent version of a character Allen played himself in his earlier, funnier movies. He’s out of luck (he has to close down his rare book store), a bit opportunistic (obviously) and constantly wisecracking. But the idea of setting up a Hasid widow with a male prostitute, even a male prostitute as soulful as Fiorovante, struck me as so ill-advised to be practically cruel. The awkward initial encounters between Fiorovante and Avigal didn’t do much to ameliorate that impression, although the movie does find its feet again as the characters begin to fall in love (the de-boning-a-whole-fish sequence is absolutely classic, trust me on this). At this point, the Hasid cop played by Liev Schreiber, who’s long loved Avigal, takes action against the funny business he suspects is going on, and the movie becomes an odd Orthodox slapstick narrative, while falling back on the tiresome movie convention about sexual performance being inhibited by the fact that one loves another from the one that one is currently delivering the business unto. Oh well.

Shot by Marco Pontecorvo with the kind of light that, for me at least, evokes the enchanted corners of Manhattan and Brooklyn as they were thirty or forty years ago, enlivened with a score featuring many lovely vintage jazz recordings by warm tenor Gene Ammons, "Fading Gigolo" is a New York story through and through (pace, the jazz experts who know Ammons to be of the Chicago school), often funny, sometimes moving, occasionally goofy as hell. With my objective critic hat on, I have to admit that it’s not really a home run, but as an aging urban dweller it hit some notes both antic and plangent for me. If you’re a fan of any of the cast members it might well do the same for you. 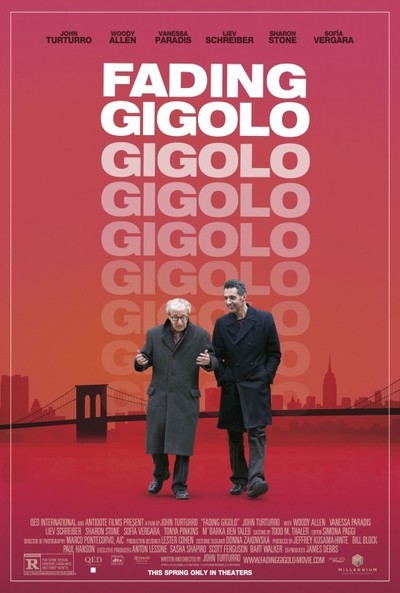 Rated R for some sexual content, language and brief nudity