Editor's Note: Starting with this article, the first Tuesday of every month will include a feature on a notable short film complete with analysis, interview and embed so you can watch it yourself. The series is called "Short Films in Focus" and will be brought to you by a filmmaker and shorts programmer for the Chicago Critics Film Festival, Collin Souter.

Synopsis: Three immigrant window cleaners risk their lives every day rappelling down some of Chicago's tallest sky-scrapers. Paraíso reveals the beauty and danger of their job and what they see on the way down.

Every morning before doing his job, Jaime Polanco crosses himself and prays to God nothing bad happens to him. He is not a cop or a fireman. His occupation actually sounds rather mundane. He washes the windows of some of Chicago's greatest skyscrapers. He, his brother Sergio and their co-worker Cruz work at the mercy of many intricate sailor knots and pulleys that help them scale down some of the city's tallest buildings to clean the windows and support their families. So long as the winds stay calm, they feel they have little to fear.

Nadav Kurtz's documentary short "Paraíso" accomplishes a great many things in its 10-minute running time. Thought-provoking, funny and ultimately dizzying, the film examines a job anyone would be curious about, but few could imagine doing. Perhaps surprisingly, Kutrz's subjects do not come off as daredevils jacked up on testosterone. Rather, they almost seem like a real-life manifestation of the angels in Wim Wenders' "Wings of Desire." Their job invokes the possibility of death constantly hovering over them, but they go about their business in stride, observing what goes on inside the buildings they clean. Sometimes they see people going about their normal work day. Sometimes they come across couples having sex in the middle of the afternoon. It's all part of the job. 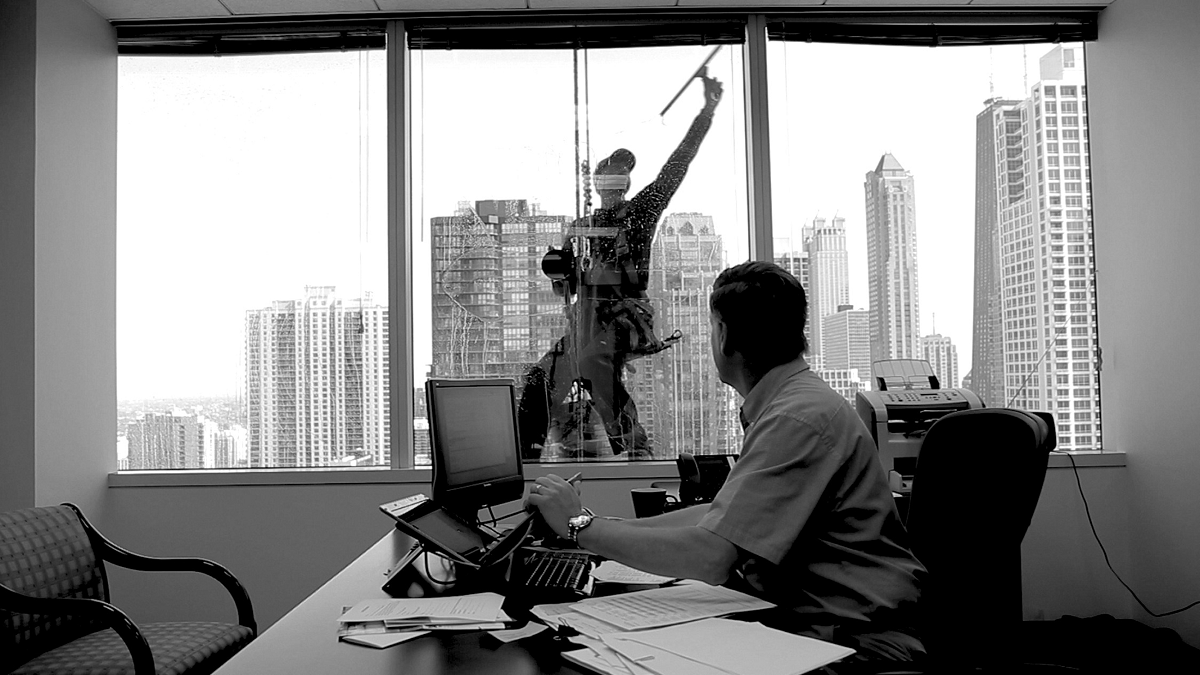 Kurtz has as much interest in their perception of the afterlife as he does on their typical workday. The interview segments are conducted in a minivan and the camera stays tight on their faces as they talk calmly and with great introspection about heaven, class systems, work ethic and the importance of life insurance. Ronen Landa's simple, delicate score wisely never underscores any danger, but rather a feeling of calm and contentment. The editing (by Kurtz and Tony Gannon) between the interview segments and the highrise footage has a fluidity that gives "Paraíso" an almost dreamlike quality.

But while the subjects talk about their hopes and fears, Kurtz and his cinematographers (Christopher Marcos, Andrew Wehde and Jay Patton) treat the viewer to some of the most beautiful and frightening shots of city skyscrapers, many from way up high, so as to make the viewer tense up a bit. Kurtz never lets the audience get used to the view even though it has been part of the washers' routine for some time. One shot in particular follows Cruz as he straps on his gear and goes over the edge. The camera follows him over and the shot peers down from what feels to the viewer like the top of the Willis Tower (it's probably not even close), the sort of momentary visceral rush that occurs regularly in "Paraíso," made all the more meaningful as these guys talk about whether or not they will have this job in heaven. 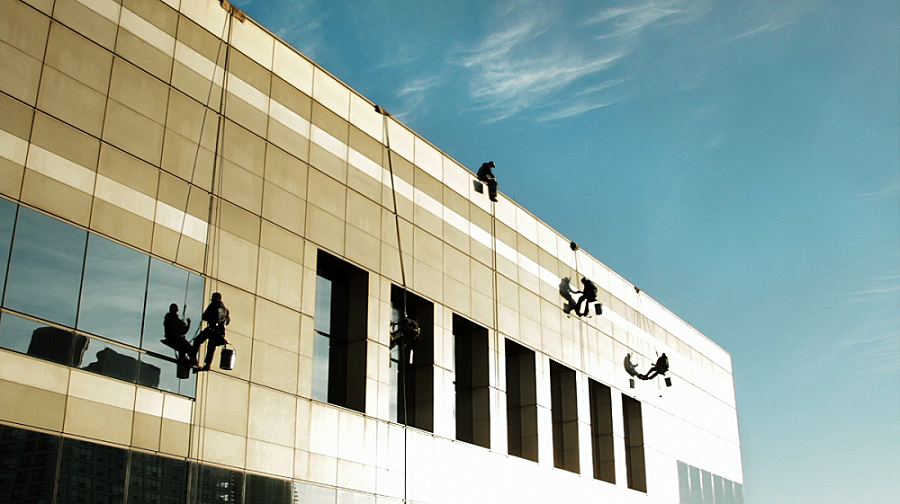 One could argue that "Paraíso" could have been longer, but at 10 minutes, the film almost feels like a daily prayer. Anything can happen once someone leaves the house and goes to work. Accidents happen. People end up at the wrong place at the wrong time. The routine is not always routine. The three men in "Paraíso" know that better than anyone. But they have made that peace with their God and feel secure enough that their families will be well-looked after if they did not come home one day. In a short amount of time, "Paraíso" gets viewers wondering whether or not they would be emotionally or spiritually ready for such a strong, unexpected gust of wind to suddenly blow them in another direction.

How did this film come about? Was there any kind of thesis in mind when you started out?

I was working as an editor in Chicago, coincidentally in the big glass building you see in the film. A guy popped by my window, cleaned it and disappeared. It left a strong impression on me. There was something intriguing about this brief, visual contact with someone on the other side of glass. The process of making the film was actually extending that idea, reaching across some of the ethnic and class lines that can separate lives in Chicago and that also made it such a rich place for me to live when I was there.

You had four cinematographers on this film. Was there any hesitation on anybody's part to go to the top of the buildings to film? Did anyone draw the shortest straw?

Most cinematographers I know have a bit of an adventurous edge to them so I think, if anything, there was more eagerness to get onto the highest buildings and have access to the most unusual vantage points. There was certainly some trepidation about safety and making sure gear didn't get knocked over the edge by the wind. 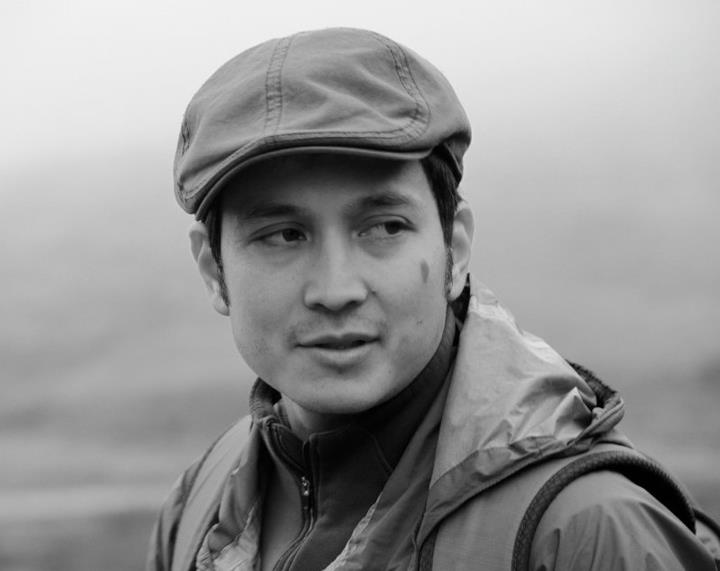 Talk about the interview process. It's all in the minivan. Were there more interview sessions or did you just have one day with them?

I actually like to do audio interviews and have conversations initially. So the interview in the film came from a conversation that came very late in the process. We had discussed these topics, some of which they had not considered and that evolved over the weeks when I was away working on other things. The interesting thing is that I didn't interview them in the minivan, because I don't speak Spanish and couldn't follow what they were saying. But because we had many conversations in English (which they speak but not as fluently) before, I would bring up a topic and ask them, for example, "Remember when we talked about what you think about people in the buildings?" They basically had a conversation about all these topics that we had talked through earlier.

They opened up to you quite a bit. Were you surprised by that? Surprised by any of their viewpoints?

Yes and no. Like I mentioned, the comfort level grew as we kept meeting over a period of a time and I was also very open about my own viewpoints about some of these topics and the reasons why I thought their story was interesting. So this grew gradually. But I was surprised by how naturally they felt expressing all of this in front of the camera. They're men who are very comfortable in their own skin.

You've edited many short films and a feature. This is your first documentary short. Was there anything in the editing process for "Paraíso" that you did not expect?

Yes, I learned a lot about the pressure of directing when you really, really want your film to be good and what a help it is to have the support of a good editor. You have to be a bit critical as an editor, which is an essential quality, but understanding the other side, the pressures of directing, is important.

Paraiso from Static Studios on Vimeo.