The mouse roared and so did the audience on Friday at D23 Expo at Anaheim Convention Center. The D23 Hall presentations began with introducing the newly inducted Disney Legends in the morning and ended with and afternoon of clips about upcoming animated features from Walt Disney and Pixar Animation Studios.

This year’s ceremony marks the 30th anniversary of the Disney Legends Awards. The first Disney Legend was Fred MacMurray who starred in “The Shaggy Dog,” “The Absent-Minded Professor” and “The Happiest Millionaire.” He was honored in 1987. With this years honorees, there are now 276 Disney Legends.

Before introducing the new slate of movies, Alan F. Horn, chairman of The Walt Disney Studios, reviewed last year’s successes of “Finding Dory," “Moana” and “Zootopia,” laughingly admitting that “Zootopia” made his recent visit to the dreaded DMV more bearable. “I was smiling away because I kept thinking of that scene” of the speedy sloth. Horn also couldn’t resist joking that John Lasseter knows the animated features “Inside Out” when introducing him.

Appearing dressed in one of his Hawaiian shirts, Lasseter began by shooting T-shirts out into the audience. One lucky person caught a Pixar Hawaiian shirt. Lasseter first introduced a clip which he called “The Speed Test” and was entitled “This space to be filled by title when we think of one.” Set for release on April 12, 2019 and directed by Klay Hall and Roberts Gannaway, the film clip showed two aircrafts being challenged by a third in what looks to be the Southwest desert and will explore the future of aviation.

Something that does have a name is an animated short, “Olaf’s Frozen Adventure.” Directed by Kevin Deters, the short will feature four new songs by Alyssa Samel and Kate Anderson. Olaf, the snowman that came to life in the hit 2013 “Frozen,” and the reindeer Sven helps Elsa and Anna form their own holiday traditions by going door-to-door in Arundel and learning about different family traditions.

The clip was introduced by Kristen Bell, who voices Anna. Bell pretended that the audio for the clip was having technical difficulties which were resolved when Josh Gad, Olaf’s voice actor, stepped out and performed the song live. The lyrics poke fun as some questionable aspects of holiday traditions: "Hanging all your socks above an open fire. That sounds safe." or "Wait up for a chubby man to shimmy down your chimney. Breaking and entering, okay on Christmas!” or "You cut down a tree and then you dress its corpse with candles? I love it!"

After the song, Gad told Lasseter, “I’m so glad that we are here tonight to right a wrong, John. At last, Olaf, like Luke Skywalker before him, is finally front and center.”

Although Bell protested, "It's an ensemble film, Josh,” Gad noted, "From where I'm standing, I don't see the words Ensemble's Frozen Adventure.” He also pretended to confuse Bell with another Disney Belle (Gad played the villain Gaston’s sidekick, LeFou in this year’s live action “Beauty and the Beast”).

“Olaf’s Frozen Adventure” will be premiere on November 22, playing before the full-length animated feature, “Coco.”

The cast of “Frozen” will return in a yet untitled feature-length movie in 2019. The animated feature will be directed by Chris Buck and Jennifer Lee. Lasseter, Bell and Gad introduced a video showing the animators on a recent research trip to Norway, Finland and Iceland. 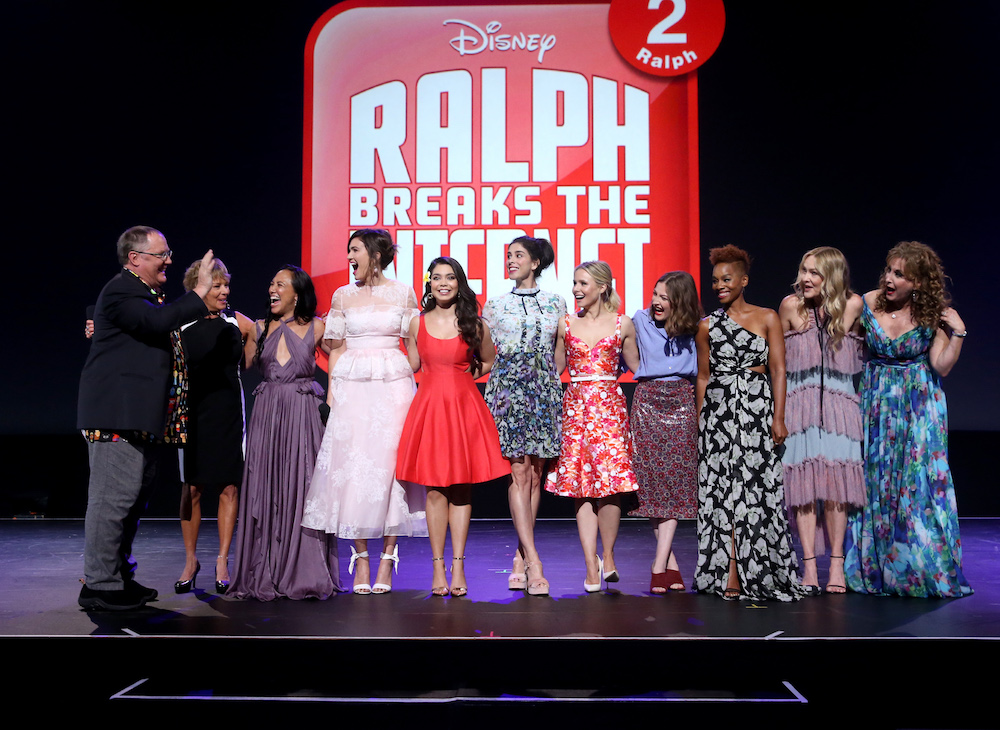 Next directors Rich Moore and Phil Johnston were joined by Sarah Silverman on the D23 stage to talk about “Wreck-It Ralph 2: Ralph Breaks the Internet.” Wi-fi changes the "Wreck-It Ralph" world that we last saw in 2012 when Ralph (John C. Reilly) and Vanellope (Sarah Silverman) get sucked into cyberspace and deposited in what looks like a mall. Ralph and Vanellope will meet an algorithm named Yesss (voiced by Taraji P. Henson) who is in a constant state of flux.

“Yesss is a new character who owns the website Buzzaholic,” Henson explained. “Yesss knows about everything cool and on trend. And she does spell her name with a triple ‘s.’ Yesss is very savvy, smart and sexy.” To keep in style, Yesss’ hairdo constantly changes as do her clothes.

In a hilarious clip, Ralph and Vanellope are sucked into a new world where Vanellope meets all the Disney princesses (mostly voiced by their original actresses) and becomes a princess herself. The princesses question each other’s realities and common sense while revealing some secrets (e.g. Snow White needed glasses). The actresses behind the voices—Auli’i Cravalho (Moana), Kristen Bell (Anna), Mandy Moore (Rapunzel), Kelly MacDonald (Merida), Anika Noni Rose (Tiana), Irene Bedard (Pocahontas), Linda Larkin (Jasmine), Paige O’Hara (Belle) and Jodi Benson (Ariel)—took to the stage to the audience’s delight. 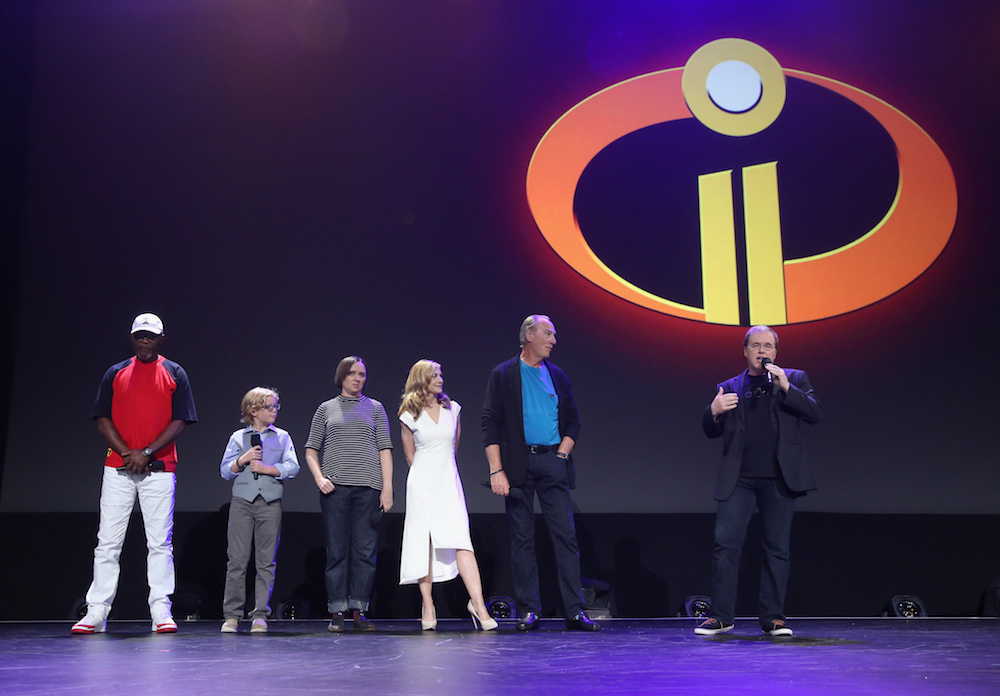 Lasseter also introduced both writer/director of “The Incredibles” Brad Bird, along with the voice of Edna Mode. Mode drolly commented, “I don’t appear unless I get the check” but finally relented saying, “I will appear in the form of a disillusioned middle-aged man” (by the person who voices her character, Bird). Mode was the subject of a short video in which fashionistas like Heidi Klum, Kendal Jenner, Zac Posen and Rachel Zoe commented on her influence.

Bird introduced animation tests that showed the technological improvements since the 2004 feature film premiered. Then he explained the storyline of “The Incredibles 2” picks up soon after the end of the last movie. One of the DVD and Blu-ray extras was an animated short: “Jack-Jack Attack.” In the short, the babysitter has to deal with the “weird things” that are happening. In the feature film, we only hear the babysitter’s panicked voicemails and while we see the toddler Jack-Jack’s special powers when Syndrome attempts to kidnap the baby, his family does not. In the sequel, Jack-Jack’s mother, Helen is off superheroing and has left Bob to care for Jack-Jack. Bob falls asleep watching television but through a sliding glass door, Jack-Jack spies a raccoon in the backyard stealing garbage and decides to do some superheroing of his own. Even when Bob wakes up, he doesn’t realize the extent of Jack-Jack’s special powers.

Craig T. Nelson (Bob Parr/Mr. Incredible), Holly Hunter (Helen/Elastigirl), Samuel L. Jackson (Lucius Best/Frozone) and Sarah Vowell (Violet Parr) will be returning, but due to a natural voice change, Spencer Fox who voiced Dash Parr, the son, will be replaced by Huck Milner. On stage, Hunter advised Milner, “Get used to the phrase: Where is my limo?” Vowell said, “Listen to your sister,” but Jackson had the best advice for the newcomer, “Don’t read the comments.”

More sequels are in the works, including “Toy Story 4” which will be directed by Pixar’s Josh Cooley. That film will be released in June 2019. Pixar is also working on an original feature film to be directed by Dan Scanlon (“Monsters University). Instead of monsters, this movie will be in a world populated by elves, trolls and sprites, or, “anything that would be on the side of a van in the ’70s,” Scanlon commented. “In the film, we’re going to tell the story of two teenage elf brothers whose father died when they were too young to remember him. But thanks to the little magic still left in the world, the boys embark on a quest that will allow them a chance to spend one last magical day with their father.” 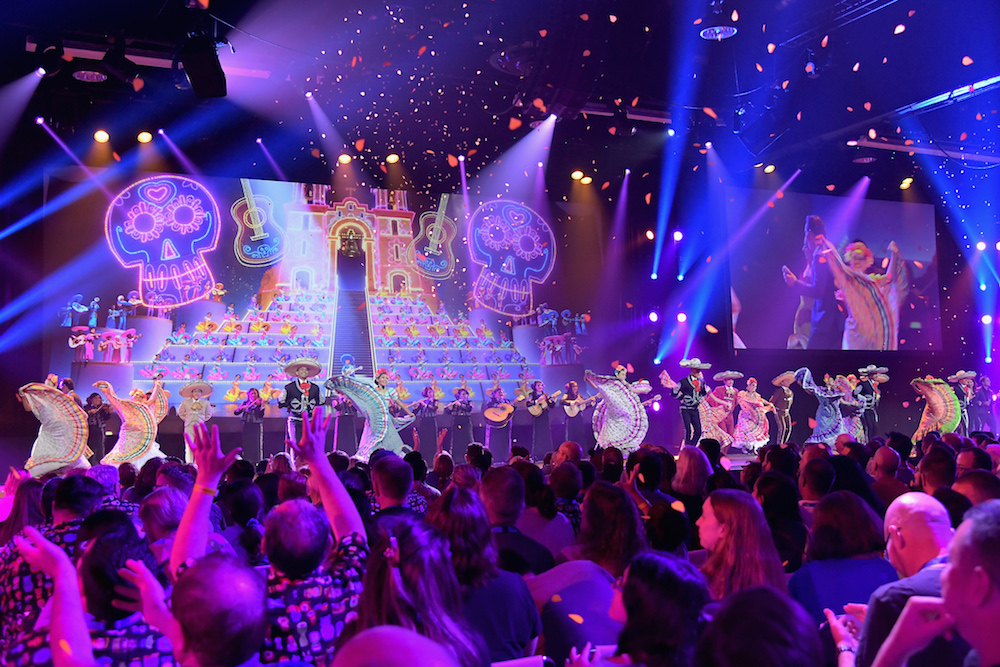 The presentation ended with the first-ever public performance of “Remember Me” from Pixar Animation Studios’ upcoming feature film, “Coco.” Coco is about a talented young singer/guitarist, Miguel (voiced by Anthony Gonzalez), whose family has banned music, but Miguel idolizes Ernesto de la Cruz (Benjamin Bratt), a famous Mexican singer. Circumstances lead Miguel to be in the Land of the Dead where he must unravel the truth about his family and their distaste for music. Kristen Anderson-Lopez and Robert Lopez created the original melody as “the signature song made famous by Ernesto de la Cruz,” director Lee Unkrich explained. “It embodies the key theme in our story: the importance of remembering loved ones both in life and beyond.”