The Oscars: Captain Kirk was right

Listen -- a billion people are throwing up. That's a rough estimate of course, but every year somebody at the Oscars says a billion people on the planet are watching the program; however many watched this year's Oscar show, they may well have felt sickened by it. It was a stomach-churning, jaw-dropping debacle, incompetently hosted and witlessly produced.

But even in Hollywood and even on television, nothing is 100 per cent bad, and at about 11 p.m. Eastern time, Barbra Streisand magically materialized onstage to sing "The Way We Were" as a tribute to the late Marvin Hamlisch, and there wasn't a dry eye in the world. At last, a true living legend -- a genuinely thrilling star.

Then the producers managed to pull off a big emotional climax by having First Lady Michele Obama read the name of the Best Picture Winner ("Argo") "live" from the White House, peering out from under her bangs and lending the festivities at least of hint of -- what else -- festivity. And some much-needed class, too.

Streisand was in great voice, commanding and brilliant, the best thing on the show by far. Singing performances by Adele (the theme from "Skyfall"), Shirley Bassey ("Goldfinger") and a few others also helped elevate the proceedings from depths plumbed from the very outset on.

Hollywood historians will debate whether the 1989 Oscar show, disastrously produced by Allan Carr (with Rob Lowe singing to Snow White), will remain the worst ever or if this year's, sadistically concocted by producers Neil Meron and Craig Zadan, will take the dishonor as all-time most horrible. Both, let's face it, will live in infamy, like Pearl Harbor.

Skeptics were wisely taken aback when Seth MacFarlane, a squirrelly little ham whose forte is producing dirty cartoons for television, was chosen to host this year's event, and there was more astonishment when it was later announced he would sing and dance as part of his performance. He turned out to be the proverbial triple threat; he not only couldn't sing or dance but he was no stand-up comedian, either. 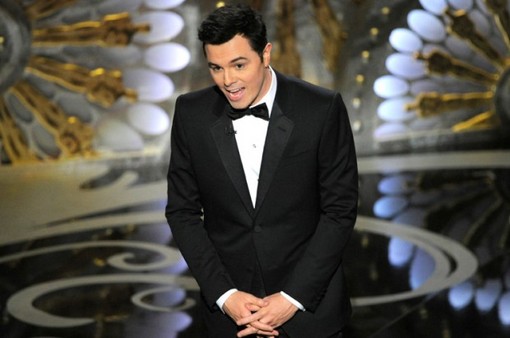 MacFarlane's attempts at irreverent humor -- like saying "Lincoln" star Daniel Day Lewis had attempted to "free" African American actor Don Cheadle backstage -- was apparently supposed to give the aging Oscarcast some kind of "edge." But people don't want an Oscars with edge; they want entertainment and schmaltz. MacFarlane laid one egg after another, many of them in the first seventeen hideous minutes: an off-the-wall sketch in which MacFarlane chatted with William Shatner (in his old "Star Trek" outfit -- from the motion picture series, mind you) about how to do the show.

There were mock headlines from "the future" assailing MacFarlane as having turned out to be the worst Oscar host ever, and the farce became fact; he WAS the worst host ever. Maybe not just of the Oscars, either -- maybe the worst host of anything.

"The show's a disaster," Shatner said kiddingly to MacFarlane, but the words rang horribly true, and only a few minutes in. Everything seemed wrong, even the set (at times, MacFarlane seemed to have been installed against a backdrop from the old "Hollywood Palace"), and especially a stupid bit of retro sexism directed at actresses in the audience, "We Saw Your Boobs." MacFarlane sang that accompanied by, for some completely unfathomable reason, the Gay Men's Chorus of Los Angeles.

Then Channing Tatum and Charlize Theron were trotted out to sing and dance "The Way You Look Tonight" from the classic Astaire-Rogers film, "Swingtime" -- but Astaire and Rogers they screamingly were not. Why hire MacFarlane to lure a younger audience to the Oscars and then have today's stars clumsily stumble through old-timey material?

So many details were mystifying or infuriating, like having a pair of socks, a white pair and a brown pair, re-enact a scene from the movie "Flight" starring Denzel Washington, or putting MacFarlane in a nun's habit so he could torment Sally Field (long ago the "Flying Nun" on TV) in a lame sketch taped earlier in the green room backstage. The saddest thing was that jokes meant to be self-deprecating just seemed horribly accurate, as when MacFarlane promised viewers "a telecast designed to put your patience to a test" or called his own movie "Ted" his "mediocre effort."

With MacFarlane flailing so miserably, the usual bugaboos of Oscar shows seemed more irritating than ever -- as when one of four men who won an early Oscar hogged the spotlight and thanked his children while the other three winners had to stand by silently. When will Oscar winners ever learn to shut up about their damn kids and stop treating this supposedly global event like a small-town pancake supper?

It seems a certainty that Zadan and Meron won't be invited back to ruin another Oscar show (the term "Academy Awards" was all but banished from the program; apparently it's considered too stuffy for today's hip audience) and, perhaps knowing that, they managed to infest this year's with tributes to their own work, mainly the Broadway musical "Chicago" which they turned into a film. You'd think "Chicago" had been the equivalent of "Oklahoma!" combined with "Guys and Dolls" for all the fuss made about it.

That the show was such a dreadful embarrassment seems especially unfortunate because the consensus has been that this year's list of nominated people and films is particularly auspicious, with many of the top winners remaining unpredictable until show time -- or some of them, anyway. Maybe there's an axiom lurking in the wings: the better the crop of films, the worse the Oscar show? It would take weeks of painful research to figure that out, and who would want the job of looking at all those old Oscar shows -- unless you went back to the Bob Hope or Johnny Carson days?

Then again, no matter how bad some of the old shows might be when revisited, this year's will remain the ultimate loser -- at least for the next twelve months, after which somebody else will take another whack at it. This year's edition could have earned one lasting distinction anyway -- the first time the Oscar telecast was even worse than the ridiculous and insipid Red-Carpet Show that preceded it.