The franchise on the edge of forever

“Star Trek” as a concept has voyaged far beyond science fiction and into the safe waters of space opera, but that doesn’t amaze me. The Gene Roddenberry years, when stories might play with questions of science, ideals or philosophy, have been replaced by stories reduced to loud and colorful action. Like so many franchises, it’s more concerned with repeating a successful formula than going boldly where no “Star Trek” has gone before.

The 2009 “Star Trek” film goes back eagerly to where “Star Trek” began, using time travel to explain a cast of mostly the same characters, only at a younger point in their lives, sailing the Starship Enterprise. As a story idea, this is sort of brilliant and saves on invention, because young Kirk, Spock, McCoy, Uhura, Scotty and the rest channel their later selves. The child is father to the man, or the Vulcan, and all that.

Don’t get me wrong. This is fun. And when Leonard Nimoy himself returns as the aged Spock, encountering another Spock (Zachary Quinto) as a young man, I was kind of delighted, although as is customary in many sci-fi films, nobody is as astonished as they should be. Holy moly! Time travel exists, and this may be me! It’s more like a little ambiguous dialogue is exchanged, and they’re off to battle the evil Romulan Capt. Nero (Eric Bana).

Time travel as we all know, is impossible in the sense it happens here, but many things are possible in this film. Anyone with the slightest notion of what a black hole is, or how it behaves, will find the black holes in “Star Trek” hilarious. The logic is also a little puzzling when Scotty can beam people into another ship in outer space, but they have to physically parachute to land on a platform in the air from which the Romulans are drilling a hole to the Earth’s core. After they land there, they fight with two Romulan guards, using ... fists and swords? The platform is suspended from Arthur C. Clark’s “space elevator,” but instead of fullerenes, the cable is made of metallic chunks the size of refrigerators.

But stop me before I get started. I mention these details only to demonstrate that the movie raises its yo-yo finger to the science, while embracing the fiction. Apart from details from the youths of the characters and the Spock reunion, it consists mostly of encounters between the Enterprise and the incomparably larger and much better armed Romulan spaceship from the future. It’s encouraging to learn that not even explosions and fires can quickly damage a starship. Also that lifeboats can save the crew, despite the vast distance from home base.

That would be because of warp speed, which for present purposes consists of looking through an unnecessary window at bright lights zapping past. This method of transportation prevents any sense of wonder at the immensity of outer space and is a convenience not only for the starship but also for the screenwriters, who can push a button and zap to the next scene. The concept of using warp speed to escape the clutches of a black hole seems like a recycling of the ancient dilemma of the rock and the hard place.

But there are affecting character moments. Young Spock is deliberately taunted in hopes he will, as a Vulcan, betray emotion. Because Zachary Quinto plays him as a bit of a self-righteous prig, it’s satisfying to see him lose it. Does poor young Spock realize he faces a lifetime of people trying to get a rise out of him? Nimoy, as the elderly Spock, must have benefitted, because he is the most human character in the film.

Chris Pine, as James Tiberius Kirk, appears first as a hot-rodding rebel who has found a Corvette in the 23rd century and drives it into the Grand Canyon. A few years after he’s put on suspension by the Academy and smuggled on board the Enterprise by Bones McCoy (Karl Urban), he becomes the ship’s captain. There are times when the command deck looks like Bring Your Child to School Day, with the kid sitting in daddy’s chair.

Uhura (Zoe Saldana) seems to have traveled through time to the pre-feminist 1960s, where she found her miniskirt and go-go boots. She seems wise and gentle and unsuited to her costume. Scotty (Simon Pegg) seems to have begun life as a character in a Scots sitcom. Eric Bana’s Nero destroys whole planets on the basis of faulty intelligence, but the character is played straight and is effective.

The special effects are slam-bam. Spatial relationships between spaceships are unclear because the Romulan ship and the Enterprise have such widely unmatched scales. Battles consist primarily of jump-suited crew members running down corridors in advance of smoke, sparks and flames. Lots of verbal commands seem implausibly slow. Consider, at light warp speeds, how imprecise it would be to say “At my command ... 3 ... 2 ... 1 ...” Between “2” and “1,” you could jump a million galaxies.

I thought about these things during “Star Trek” because I could not help myself. I understand the Star Trek science has never been intended as plausible. I understand this is not science fiction but an Ark movie using a starship. I understand that the character types are as familiar as your favorite slippers. But the franchise has become much of a muchness. The new movie essentially intends to reboot the franchise with younger characters and carry on as before. The movie deals with narrative housekeeping. Perhaps the next one will engage these characters in a more challenging and devious story, one more about testing their personalities than re-establishing them. In the meantime, you want space opera, you got it. 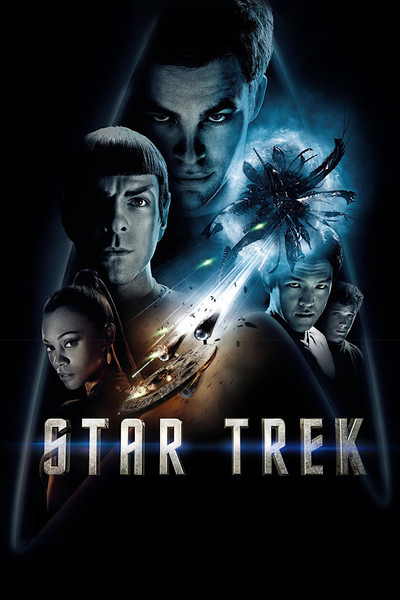