In the Company of the King: Johnny Carson Interviews on TCM

Gold from a salt mine — it doesn't happen often. And yet it's an apt if hardly clever way to describe the latest bit of beneficence from Turner Classic Movies, the only cable channel I truly could not live without. On Monday, July 1, and for several subsequent Mondays thereafter, TCM will be retrieving, not from movie vaults but from television archives, a colorful collection of interviews that the legendary Johnny Carson did with a wide variety of movie greats (or near-greats), living and dead. The Carson collection is stored in a salt mine in Hutchinson, Ks., because of the low humidity and greater likelihood that videotape and film will survive down there. Jeff Sotzing, Carson's nephew and long-time associate, presides over the trove. One could be cynical and call this just another way to squeeze revenue out of old video (several DVD collections of Carson highlights have been issued), but it would be petty to quibble with motives when the results are so cheering. And endearing.

"Carson on TCM" is the no-nonsense title for the collection, culled from three decades of chats that Carson had with guests on "The Tonight Show," the informal salon over which he presided until 1992. Yes, a pause while many of us sigh, "Can it possibly be that long ago that he left?" The tears have scarcely dried on my pillow (okay, a slight exaggeration).

Chevy Chase, of all people, casually utters on one of the restored interviews (airing July 8) what turned out to be a simple but prescient prophecy: "There's nobody who's going to be 'the next Johnny Carson.'" This was 1986, long before national panic had set in over Carson's announced departure, and Chase made the remark in response to then-common speculation that he might be just the guy to disprove his own prediction. When Chase did try his hand at a late-night talk show, on Fox in 1993, it was a disaster, largely because Chevy Chase simply has no interest whatever in other people. (It's not a mean thing to say; he's fairly typical of many actors and comics).

Carson seemed truly and selflessly interested in other people, famous or not, and of the many celebrities who'll pop up as part of this array, only a minority seem to have been booked merely to plug an upcoming movie or TV show. Kirk Douglas (July 1), for example, had written his autobiography after years of delay, yes, but he did relatively few talk-show appearances to hype it, and the interview is a genuine delight, two champs gently sparring.

But back to Chevy Chase. The excerpted episode on which he appears, from December 1986, also includes a visit from our own beloved Roger Ebert and then-partner Gene Siskel, and of course it is wonderful to see them again, Roger looking particularly young and buoyant. They were on the show several times and had an agreement between them to alternate on seating; this was Gene's turn to occupy the chair closest to Carson, Roger on the iconic (for once the word fits) couch. It turned out to be felicitous placement for Roger, and Gene may well have regretted it, because Roger and Chevy get some funny business going, impromptu and seemingly good-natured horseplay — though with Chevy Chase, you can never tell for sure. His nature isn't always good.

Roger had looked with disapproval on Chase's 1986 film "The Three Amigos" and admitted as much, even with Chevy sitting right next to him. Encouraged by Carson, Chevy went into his funny-faces routine, mocking Roger literally behind his back as Roger talked about being disappointed in the film — but also saying, diplomatically, that Chase had made better pictures in the past and would surely make more in the future. (Even before becoming a sensation on "Saturday Night Live," Chase exercised his facial acrobatics in such comedy bits as a pantomime to classical music, in "Groove Tube" or "Channel One," early media-minded satirical troupes).

It's basically a sweet sequence, though you may be surprised to see Carson taking Chase's side; then again, who in show business ever steps forward to defend critics? Not that many years before, Carson had said of Chase that "he couldn't ad lib a fart at a bean-eating contest," based on seeing Chase and the rest of the SNL cast standing around speechless one night when the show ran short. Did Carson really say that? Yes, I know he did, because he said it to me. I interviewed him a few times, the first at his home in Bel Air, with third wife Joanna Holland wafting around in a gracious-hostess get-up. 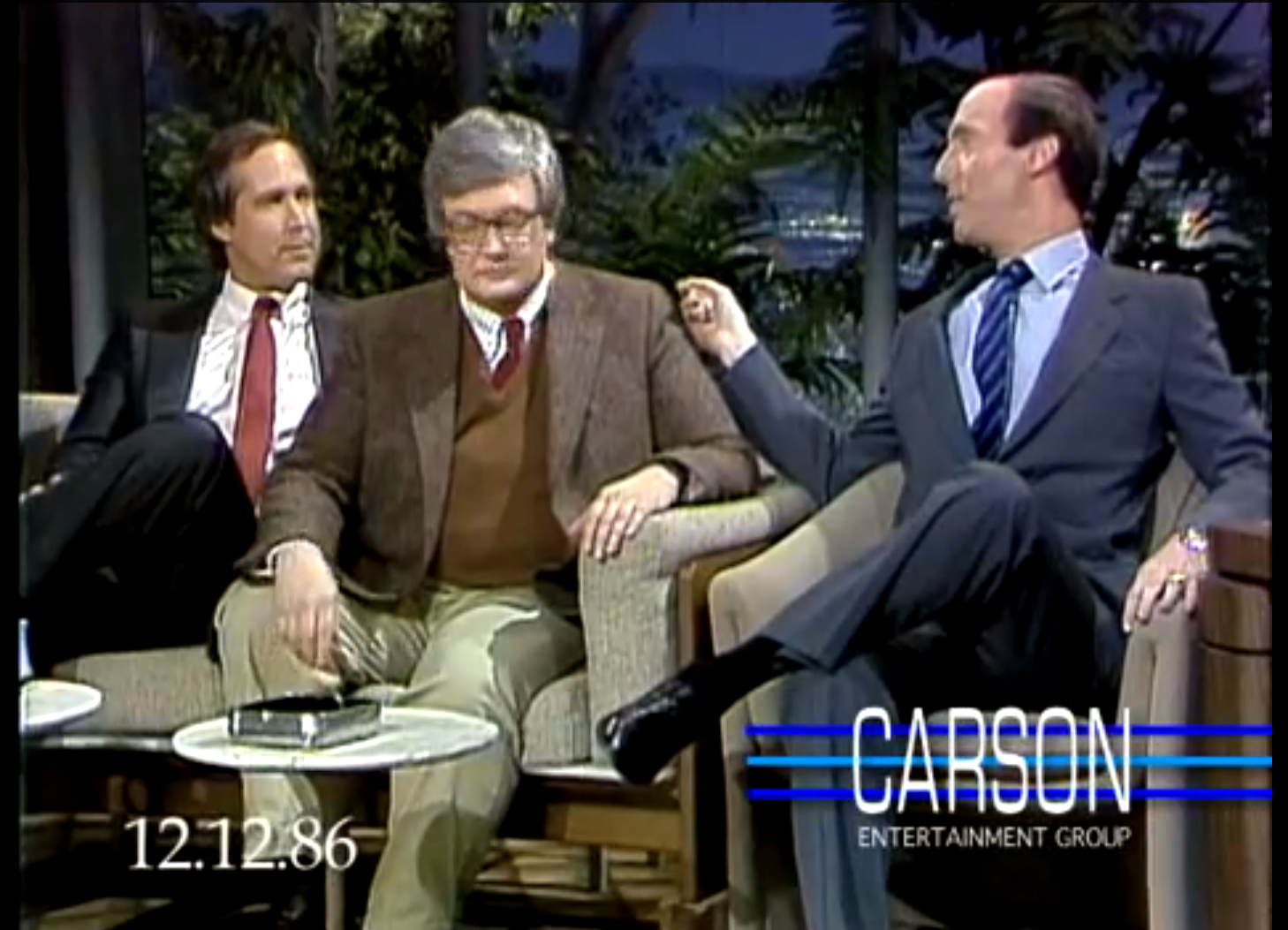 Carson and Chase made up later and became poker buddies. So you never know. In the excerpt, Chase taunts the two critics with a snotty, "When are your next pictures coming out?" Roger adroitly counters, later, by mentioning-while-pretending-not-to-mention "Oh, Heavenly Dog," a 1980 fiasco in which Chase ignominiously costarred with Benji the mutt. Roger holds his own with Chevy and doesn't seem to resent the moderate mockery going on behind him. It may seem less than momentous now, but it was the kind of Carson moment that people were bound to talk about the next day.

Today, of course, the talk-show host most likely to generate water-cooler buzz is the great David Letterman, who is easily Carson's equal at snappy ad-libs if not when it comes to projecting warmth. Certainly Letterman ranks as a colossus when compared with other would-be Carson's around him — especially Jay Leno and the opposite-of-electrifying, that Johnny-come-lately Jimmy Kimmel. 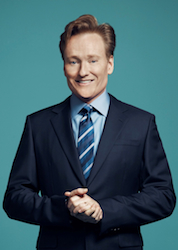 What about Conan O'Brien? Funny I should ask; on brief leave from his own cable talk show, he hosts the TCM Carson series, very capably and self-effacingly. We'll never know what heights Conan might have scaled if he'd gotten a fair shake at the "Tonight Show," but it all became
Advertisement
such a crazy quagmire, with Leno going and coming and doing his disingenuous best to appear as if he hadn't a mean bone in his body. Maybe not a bone — but what about his liver, gall bladder or mean spleen? And yet with Leno now on the receiving end of yet another shaft from NBC's bottomless quiver, it's hard to maintain any hostility toward him. He still shines on the part of the "Tonight Show" that Carson made the most important, the monologue. Leno is a great joke-teller.

Uhhh, I think I got off on a tangent there. Well, I'm old, old enough to remember most of the Carson interviews from their first time around. Even though he'd made perhaps too many appearances on the show, George Burns is truly funny in a 1989 Carson appearance to be shown in the July 1 show. It is still infectious to share Carson's delight at hearing Burns tell stories about Johnny's idol, Jack Benny (who was also idolized — and discovered — by Carson's illustrious predecessor, Jack Paar). And you can gauge the generational difference in talk shows of then and now in one Carson remark to Burns: "Let's talk about Al Jolson a little bit." Yes, children, it used to be that no discussion of show-biz legends was quite complete without an Al Jolson anecdote. 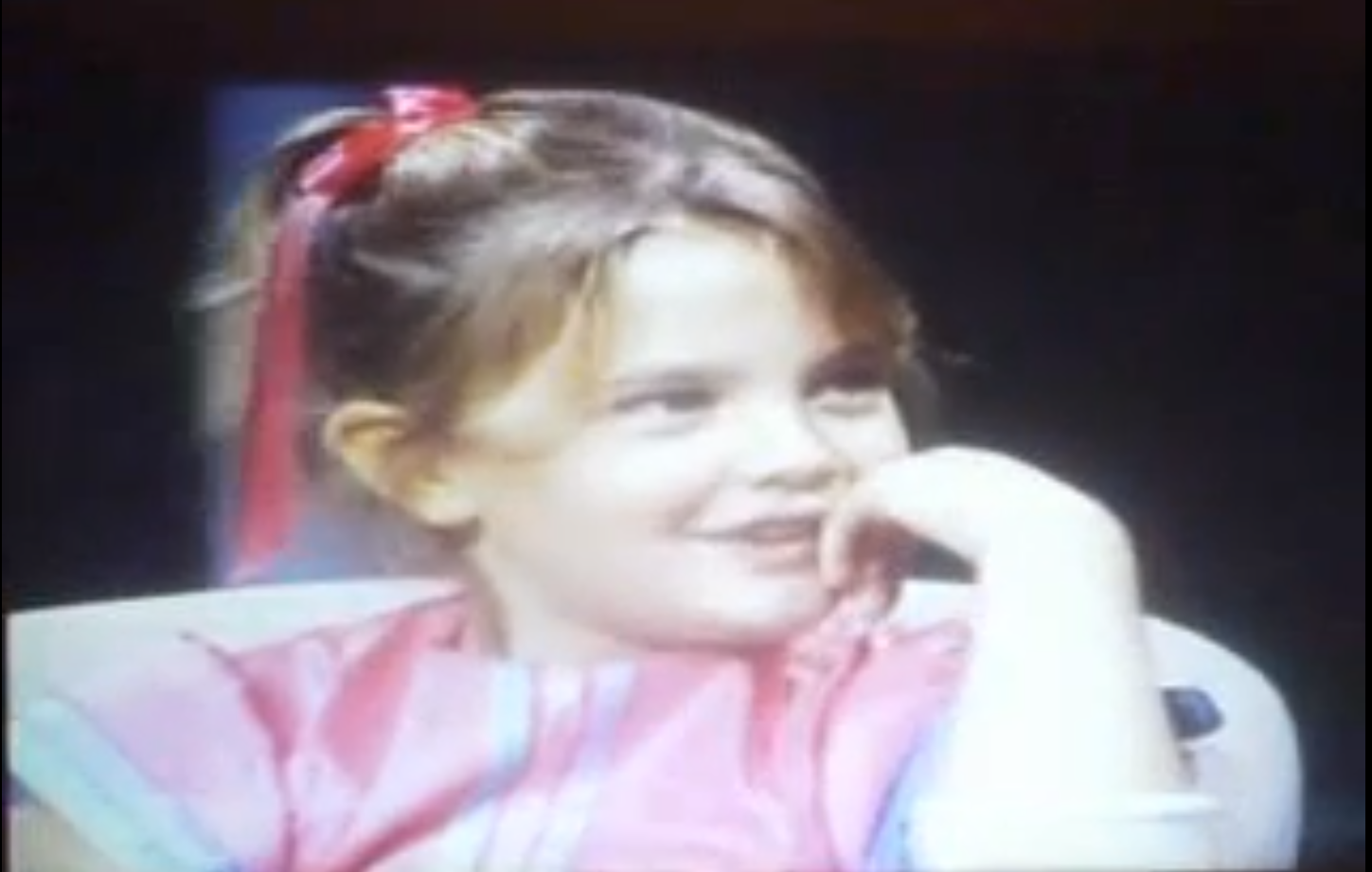 These aren't really interviews so much as conversations, the more to Carson's credit. He was expert at putting guests at ease and at asking potentially troublesome questions in a non-confrontational way. People who lived through the era might consider Dick Cavett a better mainstream interviewer, but Cavett was never half as much fun to watch as Carson was.

In our Bel Air interview, Carson said he didn't think he'd still be hosting the "Tonight Show" when he was 55. He was 67 when he quit, essentially having been crassly forced out by the ruling NBC idiocracy, and he was 79 when he died. I got to interview him again — his last major newspaper interview, I believe — when he was awarded the Kennedy Center Honors, a prize that also later would go to Letterman.

I remember driving through the gates of Johnny's Malibu home and seeing a guard posted in a tower nearby; otherwise, Johnny would explain, gawkers would scale the fence and trespass. I stood at the exact spot in the shiny, spacious and oddly metallic foyer of his house where neighbor Bob Newhart, on his first visit, had jokingly inquired, "Which way to the gift shop?" Carson laughed as he recalled that. Then, seemingly uncomfortable in the palatial surroundings, he proposed we adjourn to his "tennis house" across the street, where logically enough his tennis court was.

Before the interview, Johnny showed me a wall of photographs, big stars who had all appeared on his "Tonight" show when it still aired nightly from New York, and he told me that all the kinescopes and videotapes from those early shows were lost, gone forever, though a tiny bit remains of Groucho Marx introducing Carson on the first show. Thus "Carson on TCM," which will include excerpts dating back to the '70s (Fred Astaire, to name one long-ago guest) seems particularly priceless.

Our interview over, Johnny walked me back to the big house across the street, to the driveway where my car was parked. I thanked him, shook his hand, and started to get into my car as he walked toward the entrance. And then out of pure emotion and sudden impulse — and laugh if you will — I called out to him.

"Johnny?" He turned around. "Thank you." I guess I meant thank you for the interview, but in my head I imagined I was speaking for the whole country, for everybody who'd ever survived a depressive spell with his help, for thirty years of uncommonly, unfailingly faithful service.

And there were tears in my eyes, dammit. I couldn't help myself.

For its July 1 launch, Carson on TCM will open with Johnny Carson's adorable 1982 interview with 7-year-old Drew Barrymore, who has since grown up to be a Golden Globe-winning actress and co-host of TCM's The Essentials. The night will also feature interviews with Kirk Douglas (taped in 1988), Mary Tyler Moore (1978), writer Neil Simon (1980) and George Burns (1989), one of more than 20 Academy Award® winners featured in the collection.