I spent a night in jail once—27 hours, in fact, in Baltimore, Md., courtesy of a deranged traffic cop who thought jail a fit punishment for speeding. Two other men and I were squeezed into a cell that, said a posted sign, was to accommodate only one, and from sleeping on that cell's cold cement floor near a constantly coughing man, I caught pneumonia and could arguably have died. It took a week in intensive care to cure the infection.

Oddly or not, that is a story for another time. I bring it up because I furthered my urban education on that miserable night. I was processed at the jail with a group of about 100 other men arrested on various charges. Of that hundred, at least 90 were black—the young black men of Baltimore who, several of them told me, were routinely arrested on Friday nights and thrown in jail. One kid told me a cop arrested him in a bar because the cop thought the kid had "too much money" in his pocket. This was a typical Friday night; the cops rounded up the usual suspects which to them meant young African-American males.

How could I not think of this when watching televised coverage of the George Zimmerman trial and hearing all that talk of racial profiling? As on that long night in Baltimore, I got from the trial and the attendant commentary a profoundly disheartening impression of what life is like for many young black men in America, suburban as well as urban.

It makes one wonder how much progress there really has been in what are termed "race relations" in this country. If there has been progress, a tragedy like the killing of 17-year-old Trayvon Martin in Sanford, Fla. by the unrepentant Zimmerman, an armed would-be cop, is all it takes to drag us back into the sad, sordid past again, as if Martin Luther King Jr. and his "I Have a Dream" speech were still ahead in the vague fog of the future, and as if Barack Obama were still a nearly anonymous teenager himself.

And as if a hundred other things that had seemed like steps forward had never happened.

My task is to comment on TV coverage of the trial, especially the last few days and Saturday night's climax, but the issues of race and profiling and prejudice, so much a part of this story, were not nearly so prominent a part of that coverage as they should have been, especially considering all the hours that ticked by. The coverage instead was all about legal strategy, and courtroom theatrics, and whether or not the trial was sufficiently entertaining to keep people watching.

(Some media critics, incidentally, have been all a-tweet and about the fact that networks were giving more time to the Zimmerman trial than to the current unrest in Egypt. I think they radically underestimate how reverberant the Trayvon Martin case has been and will continue to be, and I don't see why Americans should be ashamed of themselves for being more concerned with domestic problems than with foreign affairs, even if the oil supply is threatened). 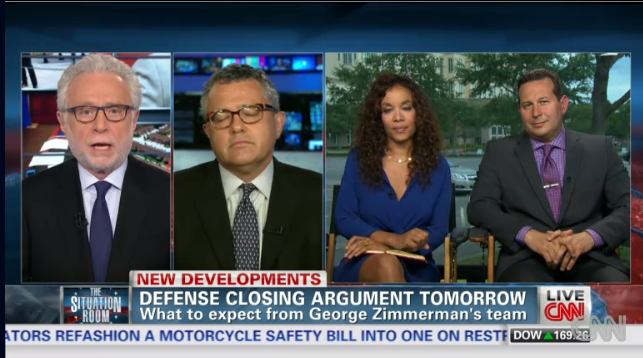 More than once during the trial coverage, an anchor or correspondent would worry aloud, on the air, if viewers might be less than fascinated with what was happening on the screen. CNN had wall-to-wall courtroom coverage, and other networks like MSNBC and Fox devoted many hours to live courtroom proceedings, and while dedicating so much time to the trial was commendable, it was often marred by a tendency to pander—to play up the trial for its "fireworks" (a word used far too often) and histrionics while playing down or simply ignoring its troubling social, legal and political ramifications.
Advertisement 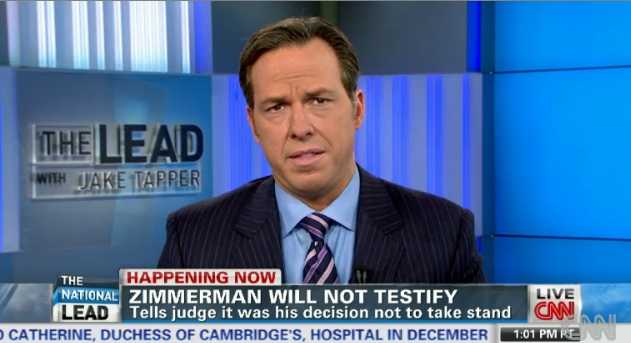 On Thursday, CNN anchor Jake Tapper actually adopted an apologetic tone when recapping such events of that day as the distribution of meticulously worded instructions to the jury. "It doesn't exactly sound like must-see TV," Tapper ruefully told viewers, "but there were, in fact, plenty of fireworks during today's hearings."

Fireworks? Oh, good! Because it might not be enough that an innocent African-American boy died a senseless death at the hands of a man charged with second-degree murder. Or that issues of racial profiling and Florida's bizarre "stand your ground" law were very much a part of the story. No, we the TV viewers of America, jaded and impatient that we are, must have fireworks if we're going to sit through a jury trial. Tapper even got CNN's otherwise helpful and tireless legal analyst Sunny Hostin to acknowledge that some of the day's proceedings were "not that exciting." 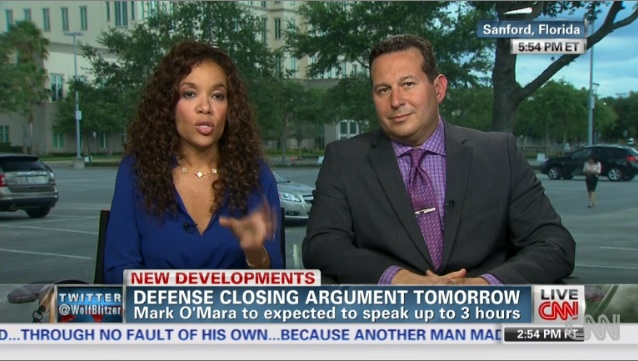 Hostin said optimistically, "I'm looking forward to tomorrow, to see some really good lawyering." Actually, there was plenty of really bad lawyering, especially by the prosecution, but the remark reflects the thrust of the television coverage; the story was presented, of course, as a competition, a clash amongst attorneys with the desired outcome being not justice or the absence of it but the proclaiming of winners and losers.

It struck me as almost laughably ironic, incidentally, that CNN clumsily attempted to bleep harsh language and to obscure what the network told viewers were unusually graphic graphics used by lawyers because they might upset us as we watched at home. Of course we should have been upset, but not about a few bad words or bloody photos. Besides, the harsh words were being quoted by lawyers, and their very harshness was germane.

But CNN thinks we can't handle too much realism in our televised reality; thus the blundering censorship. Network nabobs also were worried, clearly, that we might become bored and tune away, and so it kept a perpetual news ticker parading headlines across the bottom of the screen. Unfortunately, nobody thought to change those headlines very often, so maybe 25 times, maybe more, over one six-hour period, viewers were informed that Justin Bieber had pee'd into a janitor's bucket. This during a very, very serious trial. 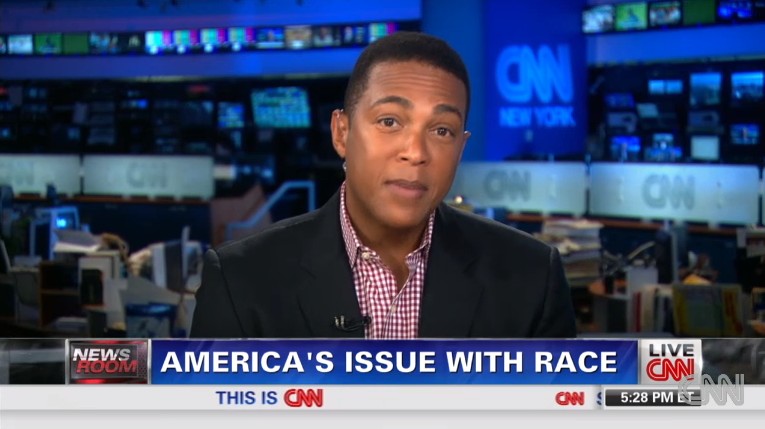 CNN decided to stay on the air with trial "coverage" even while there was nothing to cover but a closed door—behind which the jurors deliberated. Anchor Don Lemon did his best to fill the time even though he had almost no information to impart, at one point telling viewers, "Any minute now, we may get a big clue to how close we could be to a possible verdict." Later he said, "People are anticipating something happening, and something happening very soon." In fact, it would be hours, but you had to admire his sang-froid, if that's what it was.

Channel-surfing during the coverage, it was easy to get the impression that few criminal lawyers in America had not been enlisted as hired legal experts by the networks. Old reliables like Jeffrey Toobin on CNN could be depended on for solid analysis, and Ms. Hostin was for the most part a valuable addition to coverage. Lawyer Tom Mesereau, who previously "represented Michael Jackson" according to CNN, should get credit for predicting on Thursday what the verdict would be on Saturday night: "I think they're very close to an acquittal," he said of the unseen jury. 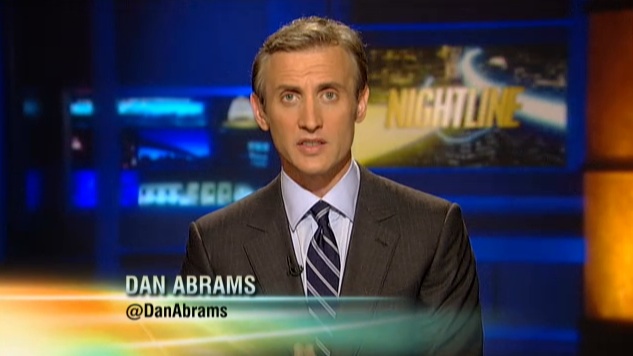 Arguably most obnoxious of the commentators was ABC's expert but omnipresent Dan Abrams, who always materializes on-camera looking primped, powdered and primed, speaking loudly and with absolute finality about every topic he touches. He's turned the guest-lawyer gig into a TV-personality job, having graduated to co-anchorship of ABC's "Nightline." He needs to pull back a little in the obsessed intensity department. Even a viewer distressed and demoralized by the jury's quixotic verdict might have been thinking, late Saturday night when it came in (vs. Saturday afternoon, as Abrams had predicted), "Well, at least I don't have to listen to Dan Abrams for a while."
Advertisement 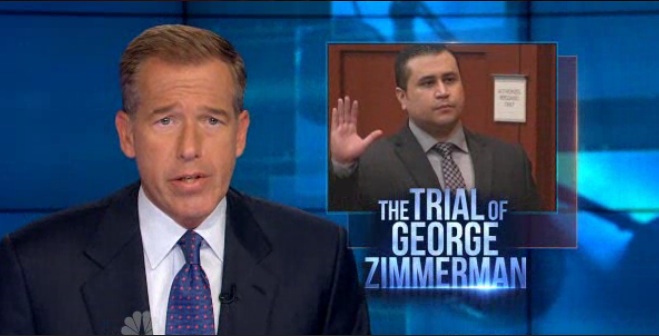 Fox News takes a lot of grief for being "tabloid," but most of the networks have tabloid streaks a mile wide. NBC News seems to show the most restraint and to place the greatest value on decorum. Brian Williams began "NBC Nightly News" on Friday by describing the trial proceedings as "closely watched, very highly charged." That gets the point across just fine and without hyperbole. But over at "ABC World News," Diane Sawyer told viewers in the opening "tease" that there had been "a final, dramatic showdown in court" and that although the defense had a big day, "the prosecution" would "come roaring back" later.

ABC News reached perhaps the lowest point of the coverage, though, with Friday night's edition of "20/20." The matter of possible urban violence breaking out in the event of Zimmerman's acquittal (unlikely, even insane, as that once seemed) had indeed been spoken of during everyone's coverage, so far as can be determined, but in a mostly responsible way. But this is how a breathless announcer opened ABC's "20/20" Friday night:

"Is a racial powder keg about to explode?! Countdown to a Verdict!"

I think that will stand, for now anyway, as the nadir.

Coverage of the trial, like the trial itself, will be much discussed in the days and weeks ahead. It's nothing new for television professionals to assume we demand entertainment values from news programming. And maybe, conditioned by years and years of it, we do. Certainly a viewer is bound to see characters in the drama as heroes or villains, with those opposed to Zimmerman and what he represents seeing the sneering, preening defense attorney Don West as a particularly arrogant example of the latter.

Having tastelessly begun the defense's case with a feeble knock-knock joke, West was, like his client, anything but remorseful as he looked back on the trial at a press conference late Saturday. "I still think the joke is funny," he insisted. "I'm sorry I didn't tell it better." His colleague, Mark O'Mara, was similarly proud of himself. "I thought every time I opened my mouth was a great moment," he said in answer to one reporter's question. And: "Everything I do, I think is done well." Ah yes: Why people love lawyers.

The gloating and crowing seemed shameful. "We are ecstatic with the results," O'Mara had said earlier—ecstatic? With a 17-year-old boy pointlessly killed? West also declared it had been "disgraceful" even to prosecute Zimmerman and put him on trial, as if he were the victim in the case.

I think in days ahead we may hear from some of the African-American journalists who covered the case about special pressures they may have felt. Pierre Thomas of ABC News comported himself professionally throughout, but at the end he had to ask rhetorically "Why did Zimmerman see Trayvon Martin as a threat?" and to predict that the kid with the Skittles has become, and will remain, "a major, major symbol" in the African-American community. That's probably an understatement.

Of all the thousands of words from all the dozens of characters in the tragedy, the most memorable, I thought, were spoken by a woman from Georgia interviewed on ABC News outside the courthouse. "I just thought," she said, weeping, "we were going to get some kind of justice."