He plays the President on TV, too

We can be very glad Barack Obama won his bid for re-election for reasons that have nothing to do with politics. Unlike Obama, his defeated opponent is, to put it gently, not a gifted public speaker. He actually has a warm and semi-mellifluous voice when speaking in a normal tone into a microphone; the best parts of his TV commercials were when he said he was Mitt Romney and he "approved this message. " Up on stages and platforms, however, he displayed little talent for galvanizing a crowd, or even holding attention.

Was anybody really looking forward to four years of a Romney Television Presidency? There's something discomforting about his presence on the air. He seems always to be faking it (it's okay to fake it, but not to be caught faking it). The blue jeans were ridiculous, and when he tried to tell a joke or make a good-natured jibe, it nearly always bombed. Then there was his refusal to appear on the David Letterman show. It gave Dave a great running gag, but at the end of the day, which is when the show airs, Romney did seem chicken.

After all, he appeared with Jay Leno.

Obviously to reassure Romney that he would not get rough treatment if he came on the show, Letterman's producers even booked Rick Santorum, former Pennsylvania senator and one-time presidential hopeful himself. Santorum was an embarrassment to the people of Pennsylvania for years and was known in Washington as one of the ten dumbest senators. And yet Dave took it easy on him. I'm sure that was meant as a signal to the Romney camp not to be nervous about appearing on the show.

Obviously Romney is a good-looking son of a gun. And no, it is not unfair to judge candidates partly on the way they look, not when most of the campaign is fought on television. In fact, every American president since Eisenhower has really had to be two people: Head of state, commander-in-chief, leader of the free world, and all that other official stuff for one. Plus another that is literally a role: the role of President as opposed to the fact of it, the guy who speaks to us and for us on the air.

Playing President involves symbolism, theatrics, and artifice, and whatever opponents said about Obama's first-term record, he's done a fine job of interpreting the role on TV for four years. Veteran viewers remember a commercial in which an actor said, "I'm not a doctor, but I play one on TV." Obama certainly was president but he played one on TV as well. Very well.

Was it -- is it -- "Reality Television"? You'd think so, by definition, but reality as an adjective is such a relative term. The presidency is a performance -- Captain of the Cathode, Avatar of the Airwaves -- and style clearly counts. Even so, both George Bushes disproved the notion that no one can be elected president who is not good on television. Neither Bush was. The second one was terrible; he reminded me of the old Red Skelton character Willie Lump-lump. In times of crisis, we like a president who makes us feel good. Obama on the air usually distinguished himself and gratified viewers.

Obama's first press conference since being re-elected aired recently on the major broadcast networks and naturally on cable news channels like CNN, MSNBC and Fox. He seemed subdued but authoritative, the Guy in Charge.

On TV, he looks good, obviously, and sounds good, having long since mastered the fundamentals. He has a great smile and flashes it rarely enough so that it registers strongly when it does appear. He says "folks" too often and sometimes utters "uhhh's" before coming up with a remark, as noted in Jay Pharaoh's "Saturday Night Live" impression. The "uhhh's" are reminiscence of Ronald Reagan's "well's"; the Great Communicator often began a remark or a response with a breathy "Well" and every impersonator incorporated that quirk.

As was evident during the campaigning, on TV Romney projects a whiny rather than winning way. In repose his face would sometimes lapse into a strange, pained, pouting-toddler demeanor, as if his goldfish had just been flushed down the toilet. And his delivery of lines in commercials, other than "I approved this message," was not impressive -- especially in the ad that had him declaring "people are really, really hurting" in this country because of the economy, an epiphany that seemed to materialize rather late in the proceedings. It was a truism, actually, by the time Romney acknowledged it and tried to pass himself off as a beloved buddy of the middle class.

Like Reagan, to whom all aspiring TV presidents will long be compared, Obama has an effortless charisma that zooms through the tube and into your consciousness. "Some people got it and make it pay, some people can't even give it away, " sang Mama Rose in "Gypsy"; Obama's got it. This is hardly breakthrough news, but it's perhaps been taken for granted considering how much TV time Obama has logged this year. At the press conference, the content of some answers was tediously detailed, but the president remained watchable even so. 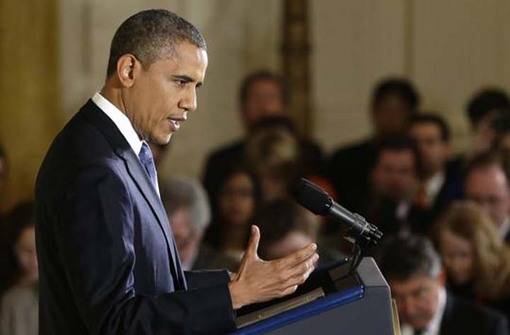 And then when, in his own subtle way, he blew his top, it made for pretty riveting drama. Angry about attacks on UN Ambassador Susan Rice for statements she made in the immediate aftermath of the Benghazi tragedy, Obama suggested that critics attack him instead, and ended the sentence describing the assault on Rice as "outrageous."

He didn't pound his fist on the podium or raise his voice to a roar (if he even can; it's not a big basso profundo), and yet wacky Wolf Blitzer on CNN felt justified in describing the moment in melodramatic terms. We had witnessed "the president ... on fire," cried Wolf. (It was always a shock when Reagan got cranky, too, because he seemed so sanguine at the center, so predisposed to geniality. I got to meet him a couple of times, and while the bonhomie was infectious in person, it seemed even more so on TV. He was Ronald Radiant).

TV is where charisma really counts, of course. I wonder if at the end of his second term Obama will have compiled as many iconic memorable moments as Reagan did. "Mr. Gorbachev, tear down that wall" is a great line; neither of the George Bushes could have delivered it half as effectively, nor could expert orator Bill Clinton, either. Richard Nixon rang up a long list of pips and howlers during his White House tenure, many remembered with a cringe, but he never projected anything even approaching charm, although God knows there was plenty of melodrama, pathos and chutzpah.

Some people in both red states and blue, meanwhile, are calling for a nice long holiday truce between the two parties, an at-least temporary cessation of hostilities so that something might be accomplished in Washington (sounds crazy even to suggest it), although the scandal involving CIA Director David Petraeus may delay progress on almost everything else. Might we at least hope for a cease-fire, regardless, between Obama and the antagonistic press, like Fox News and rabble-rousers of far-right radio? Didn't the election sort of invalidate the notion that these alleged legions must be appeased at every juncture?

I was watching Martin Ritt's movie "The Front" on Antenna TV the other night -- a heartfelt flop about the blacklisting of supposed subversives working in the movies and TV during the anti-Communist panic of the early '50s -- and in one scene, a bellicose supermarket magnate is reeling off demands to a network executive and warning that no blacklisted performers be used in any programs. Woody Allen, as the nominal hero, asks the executive just how many supermarkets this "magnate" owns, and the answer is "two or three." And yet the networks let themselves be cowed and terrorized by just this kind of minimally influential nut.

It's not who you are but how loudly you shout. So it may be now with Rush Limbaugh and his fellow denizens of the far-right, and Fox News and bilious Bill O'Reilly and cuckoo Ann Coulter and that whole noisy crowd. Maybe they could kinda cool it for a while.

One thing Obama has never appeared to lack is self-confidence. In a president or a candidate, this can be an asset, although if it goes too far, of course, you could have a demagogue on your hands. Obama is reportedly a harsh critic of himself as well as a fan, but he apparently gives himself high marks for the job he's doing. "I hope to be an even better President in the second term than I was in the first," he said -- not better but "even" better.

And yet he also said the kind of self-effacing things that are an appealing part of his personality. On the matter of improving the economy, he noted that "more voters agree on this issue than voted for me." However highly he rates his performance so far, he said, "I think there's no doubt that I can always do better." He also said of the American people, "They deserve better government than they're getting," implicitly taking some of the responsibility for that.

I should think even Obama's many detractors would give him credit for keeping his temper and his dignity through all the folderol and kerfuffle, taking the First Lady by the hand and running the gauntlet as so many presidents and their wives have done in decades past, even while commentators jabber on, as they did before the press conference, about what he probably will say and probably won't say and how many new gray hairs there are on his head since the last time he held a press conference and so on.

President of the United States can't be an easy thing to be, as is painfully plain, but it can't be an easy part to play, either. Among the magnificent media masters who've excelled in the role -- FDR on the radio, JFK on television, Ronald Reagan on both -- the name of "Barack Obama" may someday be similarly inscribed, right up there in the ether. And if he doesn't make the list of greatest presidents ever, he's already guaranteed a spot as one of the coolest.

On with the show.