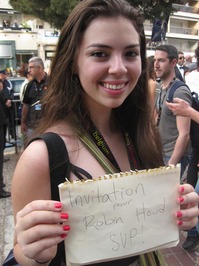 My sister, Lily, holds up her sign and makes friendly eye contact with passersby in the hopes of receiving a ticket to the premiere of "Robin Hood."

May 12th -- I have arrived. Perhaps it is just because I am writing about my experiences in Cannes this year or perhaps it is just bad luck, but there were many points during these past four days where I thought would not make it here before the festival began. On Saturday afternoon, my sister was running around the house doing some last minute packing and I was reading a fellow Cannes blogger's post about Eyjafjallajokull -- the not-so-friendly, Icelandic volcano. When I realized the volcano was causing travel problems again, I quickly looked up our flight and the status was a big, red "canceled." It was at this point that my emotions erupted right along with the volcano.

Over the next couple of days we went through numerous different schedules, the final one being a flight through Chicago to London and then a connecting flight from London to Milan. From Milan my sister and I were going to take a couple different trains to Nice. Not being the most carefree traveler, I spent the following few days trying to calm my nerves and mentally prepare for what would be long trip.

On Monday we were finally sitting at our gate in Atlanta, when I checked our flight status for the London leg, and again I was hit with the big, red, and this time flashing, "canceled." Another session of rearranging quickly took place and this time we would be flying to Paris. This was fine with me, if not better. As close to Cannes as a mode of transportation could get me was gladly accepted, as I would've walked, swam or crawled here, if necessary.

On what ended up being a delayed flight to Paris, the older woman, who was seated directly behind us, passed out. The next thing I knew, I was pushed out of my seat and a defibrillator, oxygen tank and first aid kit, took my place. A fast-paced, half in French, half in English discussion took place about whether or not to land in Montreal, since we were about to reach the ocean or as the frazzled flight attendant kept repeating, "the point of no return." Somehow, despite the condition of the woman who was now wearing an oxygen mask, the flight continued.

On the train, it had been many, many hours since sleep had even been an option and right as I was closing my eyes, I noticed the woman sitting across the aisle from me. She had just inserted the DVD she was going to watch, and I was hoping that she brought headphones with her. When the menu screen came up, I saw that she was watching Werner Herzog's "The Enigma of Kaspar Hauser." I immediately got excited and nudged my sister. I no longer wanted her to use the headphones. What an obscure, random film to accompany her on the long train ride. 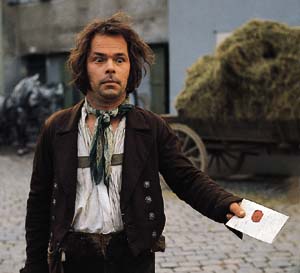 Bruno S. in Werner Herzog's "The Enigma of Kaspar Hauser."

I began thinking about Herzog and the struggles he went through to complete his films, many of which are among my favorite movies. The documentary directed by Les Blank entitled, "Burden of Dreams," follows Herzog during the five year making of "Fitzcarraldo," which eventually starred Klaus Kinski. Herzog faced innumerable obstacles, including the chaos of nature and the struggles of working with conflicting people, who had conflicting personalities. He risked his life for the film and claimed that his life was the film. Everything depended on it, first and foremost, his sanity.

And by that point in the trip my sanity rested on the shoulders of the Cannes Film Festival. I could not wait to get to a festival where the Herzog's of the world come together to show films they have put their entire mind and soul into. When you think about it, filmmakers, young and old are all really just on a bumpy back and forth journey through ashen skies and sleepless terrain and the luckiest of them will be walking the streets of Cannes over the next couple of weeks.

So, I am here! Today I decided to give into the fatigue. I figured I might as well be as rested as possible before I attempt what could easily be the busiest two weeks of my year. After waking up, a croissant was the first thing on the list. Yes, the croissant beats the Market Badge, which falls directly below the warm, buttery delicacy.

It was so exciting to take the train from Juan Les Pins, which is only about a five minute ride, into Cannes. I got the chills when I heard the god of the French train station announce, "Cannes, içi, Cannes." I spent the day retrieving my badge, relaxing at the American Pavilion, and planning my movie screenings for the next couple of days. 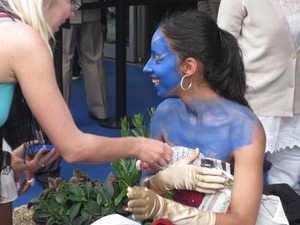 The premiere tonight was Ridley Scott's "Robin Hood," and as I am not guaranteed a ticket, I made my way over to the Palais about an hour and a half early, where I saw a woman who was rather successfully transforming herself into an Avatar. I then proceeded to beg for a ticket with my trusty Invitation pour Robin Hood, S.V.P. sign, but to no luck. I did however, run into Michael Phillips who took a picture of me in heels and all, proving that I tried my best! Tomorrow begins with "Marti, dupa Craciun," the Un Certain Regard film by Radu Muntean, and many more follow. Until then! 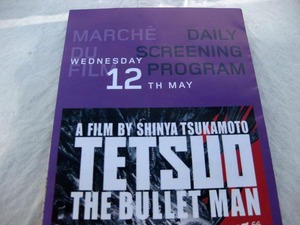 Photos by Sophie Kohn (except for the one of Bruno S., of course).