You don't dismiss the dean 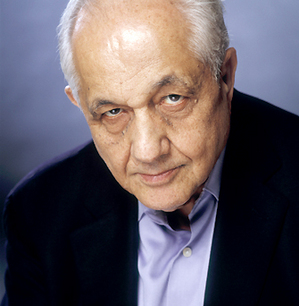 Andrew Sarris -- dean of American film critics, leading proponent of the auteur theory in America, author of the essential The American Cinema: Directors and Directions, 1929-1968 (and equally praiseworthy review and essay collections such as Confessions of a Cultist: On the Cinema, 1955-1969, Politics and Cinema and The Primal Screen), senior critic of the Village Voice for decades, co-founder of the National Society of Film Critics -- has reportedly been let go by cut from the staff of The New York Observer.

UPDATE: Dave Kehr has a clarification from Sarris's wife, critic Molly Haskell: "Andrew, along with a dozen other writers at the rapidly sinking weekly, was taken off staff on Monday, but he will continue to write on a freelance basis, exactly as Rex Reed does currently. Not great news, but -- particularly in the current context -- not a catastrophe. Andrew's day job, teaching at Columbia University, is not in danger."

Sarris, who turned 80 last October, was along with Pauline Kael the most influential film critic of the 1960s and 1970s. He was also the titular target of Kael's infamous attack on auteurism, "Circles and Squares: Joys and Sarris" (1963) -- ironic, since Kael was patently an auteurist through-and-through, even if she failed to recognize herself as such. No one has done more than Sarris to make the case that "Hollywood movies" were worthy of serious critical attention, every bit as much as "art films," no matter where they're made.

If you do not have a copy of The American Cinema -- from which, coincidentally, I just quoted a few indelible paragraphs a couple days ago -- do yourself a favor and buy it now. It's the best guide to approaching American movies that there is, beginning with Sarris's celebrated "pantheon" directors (some of whom were not, strictly speaking, "American" -- though they all worked in the US at some point): Charles Chaplin, Robert Flaherty, John Ford, D. W. Griffith, Howard Hawks, Alfred Hitchcock, Buster Keaton, Fritz Lang, Ernst Lubitsch, F.W. Murnau, Max Ophuls, Josef von Sternberg, Jean Renoir and Orson Welles. (Later he added Billy Wilder to the pantheon.)

Glenn Kenny simply quoted Jean-Luc Godard on Orson Welles: "All of us will always owe him everything."