One of the things film critics do for a living is to pay close attention to how people behave, and how that behavior is presented through visual media. This applies not only to actors playing characters, but to people who play themselves, in fictional or nonfictional settings, on and off the screen. It should come as no surprise to learn that some of our best movie critics have backgrounds in psychology. 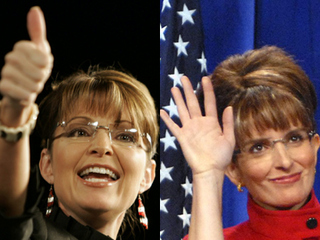 When Bill Clinton said, "I did not have sex with that woman," it now seems impossible to believe that he fooled anyone at that particular moment. But if any movie critic misread Clinton's voice and body language, that critic should have been impeached. As opaque as the clumsy verbal gymnastics of George W. Bush and Sarah Palin may often be, behind the contortions it's hard to avoid seeing the painful truth, which is simply that they don't know what their own words mean, and even when they know what they've been told to say they don't know how to communicate it. As actors, they're thoroughly unconvincing: You can see the wheels turning inside their heads -- only the gears aren't even engaged. There's a lot of whirring and spinning, but nothing happens. That can be excruciating to watch, but it's also the stuff of modern comedy. Christopher Guest, Ricky Gervais, Steve Carell, Tina Fey, Jon Stewart, Samantha Bee, Stephen Colbert and the whole Judd Apatow crew come to mind.

To me, film critics, like TV and theater critics, are especially well equipped to analyze today's politics, which is why Frank Rich made such a seamless transition from theater to media and political commentator. In fact, in some ways film critics are probably better equipped to assess the political theater of today's presidential campaigns, since our campaigns are -- as has surely been obvious for some time -- far more about theater and image creation than politics.

Goldstein's point seems perfectly evident to me (see my July post, "The Selling of the President 2008"). Just last week, Roger Ebert took notice of John McCain's dismissive behavior in the first presidential debate and wrote a piece he called "Guess who's not coming to dinner," which he addressed to McCain:

During the debate, Jim Lehrer repeatedly called upon both candidates to speak directly to each other. Obama looked at you. He addressed you as "John," which as a fellow senator is his privilege. His body language was open. You stared straight ahead, or at Lehrer, or into space. Your jaw was clinched. You had a tight little smile, or a grimace, or a little shake of your head.

I had to do two things at once while watching the debate. I had to listen to what was being said. And I had to process your rigid and contemptuous behavior. If you were at a wedding and the father of the groom refused to look at or speak to the bride, how would that make you feel? Especially if you were the father of the bride?

As far back as the Kennedy-Nixon debates, and certainly since the era of Ronald Reagan's media mastermind Michael Deaver and campaign operative Lee Atwater, political campaigns have revolved around the dark art of media manipulation, in particular in their use of campaign-commercial image-making to engage our emotions and fears instead of our ideas or intellect. Filmmakers have known this for years, which is why so many gifted directors, including Oliver Stone ("JFK," "Nixon," "Talk Radio" and the upcoming "W."), Warren Beatty ("Reds," "Bulworth" and as an actor-writer-producer on "Shampoo") and Ron Howard ("EDTV" and the upcoming "Frost/Nixon") have eagerly dissected the messy intersection of media and politics.

If filmmakers have found fertile ground doing it, why shouldn't critics explore it too? Ebert's assessment of Palin as an "American Idol"-style aspirant was also right on the mark. He shrewdly saw her as a wish-fulfillment fantasy, understanding how powerfully her seemingly down-home, small-town vibe connected with the average American voter -- who, having largely declined to pay any attention to much real political reporting, doesn't know any more about politics than "Idol" viewers know about music.

Please note that Goldstein wrote the above days before the latest, gaspingly funny of Katie Couric interview with Sarah Palin:

Let me catch my breath. Speaking as a critic and aficionado of comedy, I would like to opine that Tina Fey and Amy Poehler won't have to do a thing to that script to make a hilarious sketch on the next "SNL."

Again, that's not a political statement; it's just a critical observation of the comedy of human behavior.