Now Playing: The Selling of the President 2008 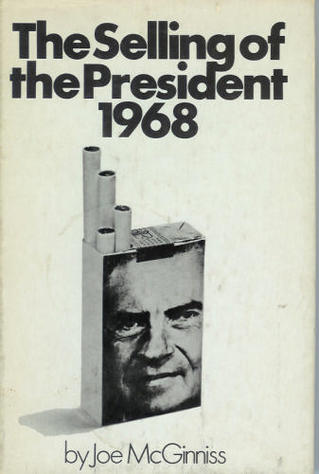 The excerpt below is from a piece I wrote at MSN Movies about what films of the past can teach us about the politics of the present. It's called Lights, Camera, Election! Political lessons we learned from the movies:

Events are more carefully staged and scripted than ever, and the mainstream media cover the photo ops, "press conferences" and "debates" as if they were actually news. Even Baghdad can be just another studio back lot: McCain claimed to "walk freely" in a market there and complained Americans weren't getting the full picture of U.S. successes in Iraq -- neglecting to mention his escort of 100 soldiers, three Blackhawk helicopters and two Apache gunships, conveniently off-camera.

Advertisement
With an eye toward Kevin Costner's "Swing Vote" (and Oliver Stone's "W."), I've rounded up a focus group of eight educational movies about politics (though many more could be added to the list): "The Candidate," "Election," "Primary Colors," "Nashville," "Bulworth," "Wag the Dog," "Homecoming" and (of course!) "Duck Soup." 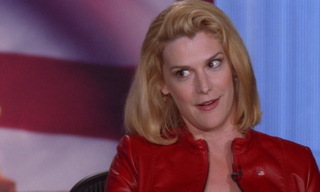 In Joe Dante's speculative horror-satire (made for Showtime's "Masters of Horror" series), a spokesperson for the incumbent administration claims that if he had one wish it would be that military casualties of the Iraq war could come back to tell us all "how important this struggle is" for the safety and security of all Americans, and how proud they are to have served their country. Well, they do come back. And they're mad as hell. And they vote, as dead people often have in America. "The face of this war had always been ugly," the narrator says. "We'd always tried to hide it from the public. But then ... they were among us ... demanding only that we look at that face and acknowledge what we had done." The risen soldiers fulfill their ideals at last, defending American honor and constitutional principles to the death. (As a bonus, few things are more satisfying, for people of intelligence and integrity on the left and the right, than seeing [A-- C------] sacrificed in effigy by undead veterans.)

Advice for candidates: Be careful what you wish for.

Advice for voters: Phony patriotism (the empty politicized sloganeering of "Support Our Troops!") is the first refuge of a scoundrel. 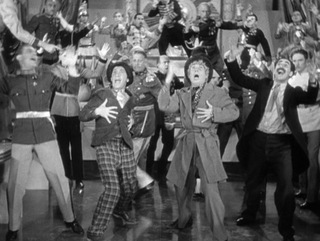 Rufus T. Firefly (Groucho Marx) never has to actually run for office in the deficit-ridden country of Freedonia. He's appointed by the richest dowager in the land, Mrs. Teasdale (Margaret Dumont, of course), who lends the country $20 million to save it from insolvency on the condition that her choice (Firefly, inexplicably) be installed as chief executive. President/king/prima facie dictator Firefly lays out the laws of his administration in a musical number: "If any form of pleasure is exhibited/Report to me and it will be prohibited/I'll put my foot down, so shall it be/This is the land of the free!" In the movie's biggest satirical production number, the populace whips itself into such a frenzy over a minor incident (Groucho insults the ambassador of Sylvania and vice-versa) that war becomes inevitable. Which prompts the four Marxes to vaudevillian heights of all-too-real absurdity: "To war! To war! To war we're gonna go! A hi-dee hi-dee hi-dee hi-dee hi-dee hi-dee-ho!" -- climaxing in: "They got guns, we got guns, all God's chillun got guns!"

Advice for candidates: Nobody is really listening to what you say.

Advice for voters: When it comes to politicians, freedom's just another word for something you could lose.

In my early teens, two of my favorite books were Joe McGinniss's "The Selling of the President 1968" and Joseph Heller's "Catch-22." They still are, and they taught me invaluable insights into the ways of the world, and not just about media manipulation and military bureaucracy, but about what makes human societies tick.

Electoral politics, of course, has always been about theater -- and, at least since the famous televised Nixon-Kennedy debate in 1960, about video and film. As Time magazine recounted in its 1969 review of McGinniss's book:

One of the most important members of the Nixon TV team was Roger Ailes [now head of Fox News], a 29-year-old master of TV who met Nixon in the fall of 1967, when Ailes was executive producer of "The Mike Douglas Show" and Nixon was a guest. Ailes' campaign assignment was to produce Nixon's television appearances. Ailes developed the "man in the arena" format, in which Nixon confronted a panel of questioners and a studio audience.

The idea was to put Nixon in front of a curved, dark-blue curtain, which would make him appear courageous and steadfast in front of his audience and interlocutors -- the New Nixon, not the Old Nixon of the shifty eyes, five o'clock shadow and flop sweat from 1960.

From Neal Gabler's excellent book about our media-shaped perceptions, "Life: The Movie: How Entertainment Conquered Reality":

"Voters are basically lazy, basically uninterested in making an effort to understand what we're talking about," Nixon speechwriter Raymond Price emphasized in a campaign white paper.... "Reason requires a high degree of discipline of concentration; impression is easier. Reason pushes the viewer back, it assaults him, it demands that he agree or disagree; impression can envelop him, invite him in, without making an intellectual demand.... The emotions are more easily roused, closer to the surface, more malleable." In short, sensation, the very basis of entertainment, was not to be the very basis of politics too.

"And so, following Price's prescription, the campaign advertising did not feature candidate Nixon discussing policy or announcing his vision for America or making any substantive comments whatsoever. Rather, it featured Nixon's voice what even one of his own advisers called "incredible pap" while quintessentially American, Rockwellian images flasshed across the screen and forged a subliminal association between the disembodied Nixon and the positive values conveyed by the pictures. What he said was irrelevant. 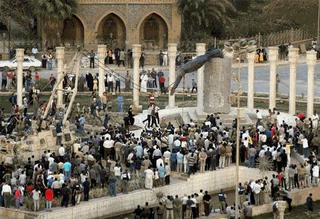 Today we take it for granted that politics is mostly show business. In the post-Rovian, post-Fox, post-embedded, post-WMD, post-swiftboat, post-reality era (those all seem so quaintly pre-2004 -- see Paul Krugman's column, "Rove's Third Term"), perhaps it's poetic irony that only media fiction can keep pace with... well, media fiction. The war-as-distraction strategy of "Wag the Dog" (released in the pre-Monica Clinton years) has evolved into the "slam-dunk" evidence for Iraqi WMDs, the toppling of Saddam's statue, the rescue of Jennifer Lynch, the death of Pat Tillman.... No longer is this kind of thing fringe infotainment for devotees of Fox News; asking no questions and accepting scripted answers has simply become the mainstream definition of newsgathering.

But even science fiction didn't anticipate the current state of things. As late as the latter third of the 20th Century, if you had predicted that "news" or "information" would consist almost entirely of reporting that one group said one thing while another group said something completely different -- disregarding the availability, or even the possibility, of independent factual evidence -- you would have been considered a Swiftian satirist, a connoisseur of the absurd and fantastical. Now you'd just be an observer of the mundane....

In my MSN Movies story I would like to have written about "The Manchurian Candidate," "Being There," "Winter Kills," "A Face In the Crowd," "Hail the Conquering Hero," "State of the Union," "Dave," "The Parallax View," "Secret Honor," "Mr. Smith Goes to Washington," and a few others. What else should have made the list, and why?

Thanks to The House Next Door for pointing me to this trailer for Oliver Stone's "W.", what appears to be another draft of history-as-fictionalized-fact starring Josh Brolin as...

"Stone... has said he did not intend to make an anti-Bush polemic; rather, his goal was to use seminal events in Bush's life to explain how he came to power, using a structure similar to 'The Queen.'"