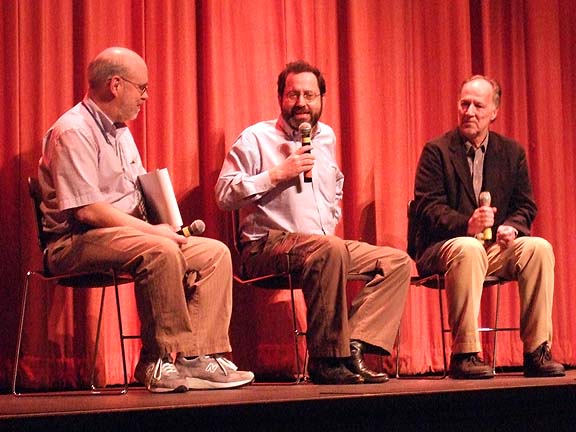 "Stupidity is the devil. Look in the eye of a chicken and you'll know. It's the most horrifying, cannibalistic, and nightmarish creature in this world." -- Werner Herzog

I could listen to Werner Herzog talk all night. And I have. (See this transcript from Ebertfest 2005, for example.) Watching the marvelous "Stroszek" (I think of it as Herzog's Fassbinder movie), with Werner, as everyone calls him, seated in the audience two rows behind me, the famous dancing chicken at the end reminded of the quote above. ("Stroszek" has one of the great final lines in movies: "We have a 10-80 out here, a truck on fire, we have a man on the lift. We are unable to find the switch to turn the lift off and we can't stop the dancing chicken. Send an electrician. We're standing by..." Those of us who are not waiting for Godot are indeed waiting for the electrician, or someone like him...) 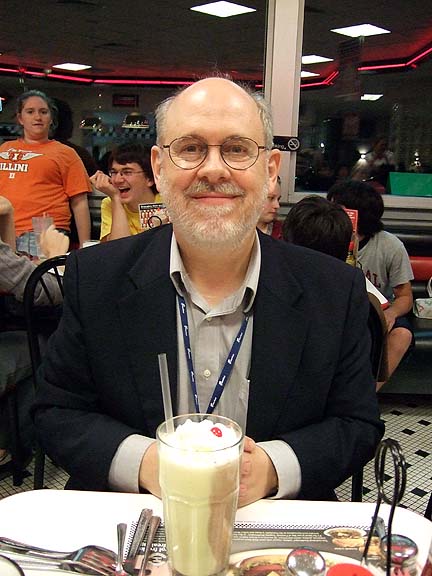 The vibe you get from this picture perfectly captures what Ebertfest feels like. Here, David Bordwell shows off his midnight-hour chocolate-banana shake at the Steak 'n Shake (yes, there's only one apostrophe in that). Somehow, when he began drinking it, he got the banana and the chocolate to stay separate on either side of the plastic straw, too. These are the things that make life worth living. (You see, the chocolate represents the movies and the banana represents the people and Roger is the glass and Chaz is the whipped cream and cherry on top and...)

Later I asked Herzog if he had changed his mind about chickens, dancing or otherwise. "I only like eating them," he said. In response, I naturally quoted a great exchange from "Chinatown":

Noah Cross (John Huston), peering at a fish on J.J. Gittes's plate: I hope you don't mind. I believe they should be served with the head.

J..J. Gittes (Jack Nicholson): As long as you don't serve the chicken that way. 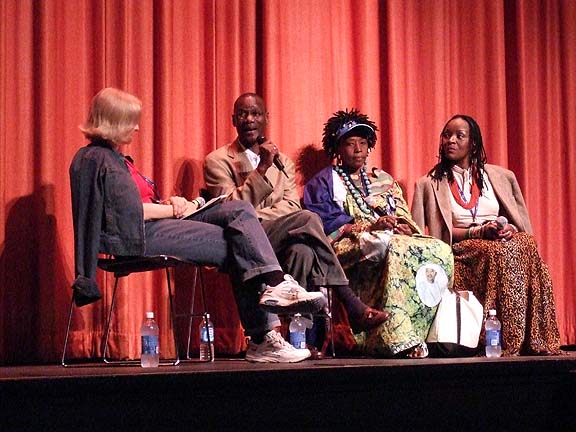 Writer Anna Thomas ("El Norte") interviews Prof. Samba Gadjigo (director of "The Making of Moolade"), actress Fatoumata Coulibaly, and actress/activist Marcia McBroom-Small ("Beyond the Valley of the Dolls") for "Moolade."

I also asked Herzog if he'd seen Michael Winterbottom's fantastic bio-comedy about the Manchester music scene, "24 Hour Party People" (perhaps second only to "The Three Burials of Melquiades Estrada" among my favorite films of the new millennium -- and the one I've enjoyed re-watching the most), in which the lead singer of Joy Division commits suicide with the last scene of "Stroszek" playing on television in the background. Herzog said he'd heard about it, but hadn't seen the movie. Well, he has something to look forward to. 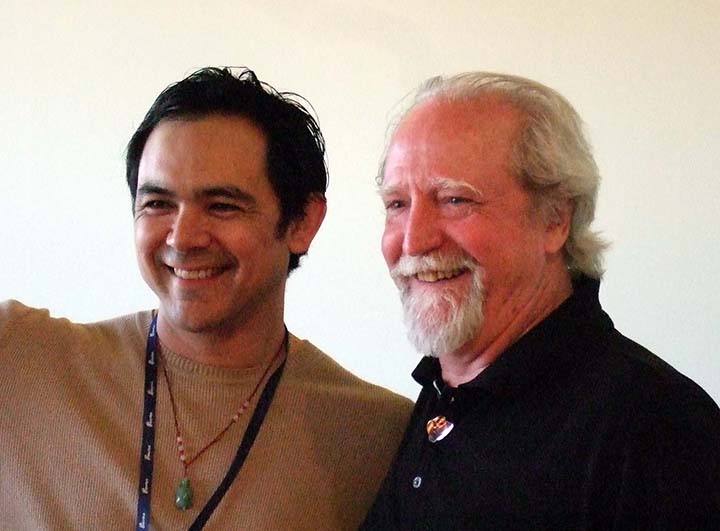 If you'd like to listen to part of the discussion between Herzog, David Bordwell and Michael Barker (a low-fi MP3 recording made on my Treo 680 -- have I mentioned how much I love my Treo 680, the life-changing "TiVo" of handheld gadgets?), click here.

It was remarkable to see how the Angry Young Herzog I remember from the '70s and '80s (in Seattle and especially Telluride) has evolved into such a congenial elder statesman. As his friend Paul Cox (who cast Herzog to play the father in "Man of Flowers," a film he described as being about "male loneliness") lamented technology (Cox is irrationally terrified of computers and cell phones), and proclaimed the imminent end of mankind's time on Earth, Herzog was more genial and philosophical. Yes, he said, it may be our turn to become extinct, like many species before us, but that's no reason to be "gloomy" in the time we have left: "Let's keep making films and treasuring friendships and drinking beers."

(When Cox, who spoke of women almost as if they were another species -- claiming they were "closer to the soil" in a way that made them sound almost bovine -- said that he couldn't think of any films about "female loneliness," Kristin Thompson came up with three masterpieces off the top of her head: Krzysztof Kieslowski's "Three Colors: Blue," Chantal Akerman's "Jeanne Dielman," and Carl Theodor Dreyer's "Gertrud.") 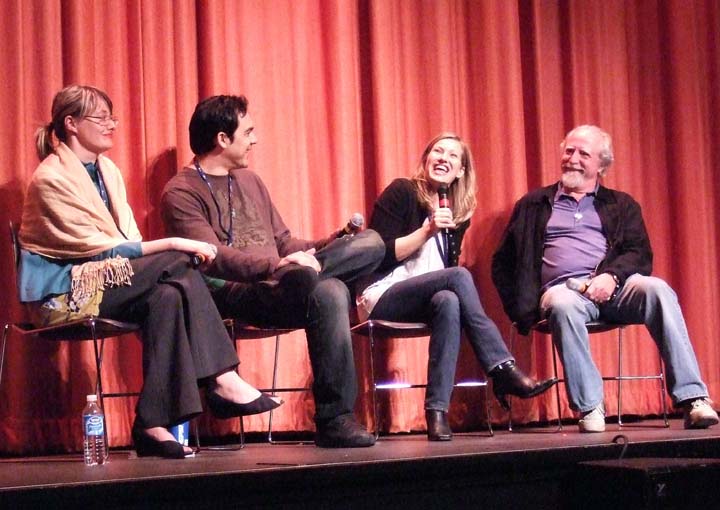 P.S. As for the dancing chicken, Herzog told the audience he doesn't know what it means, but that's not the point. You have to decide what it means to you, in the context of the film. 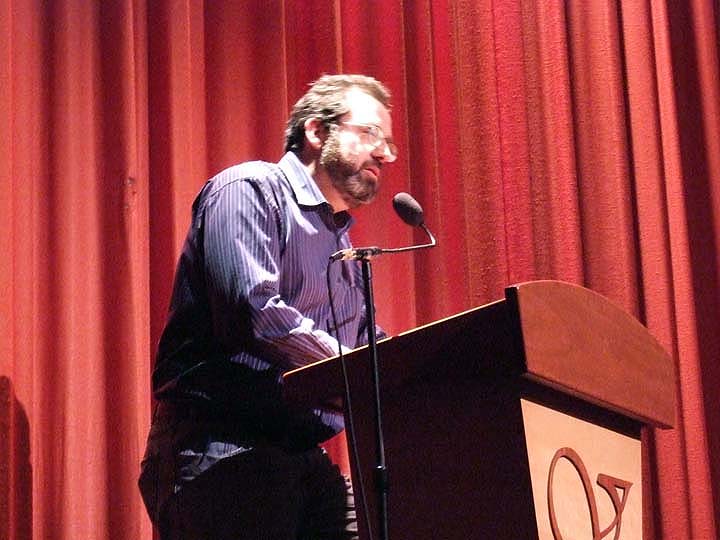 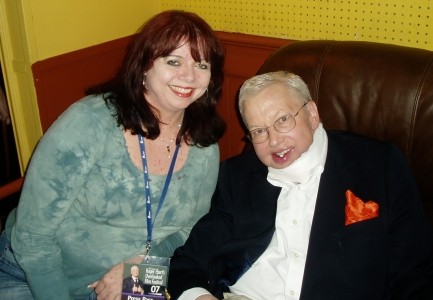 Kim Voynar of Cinematical visits Roger in his comfy recliner at the back of the Virginia Theater. 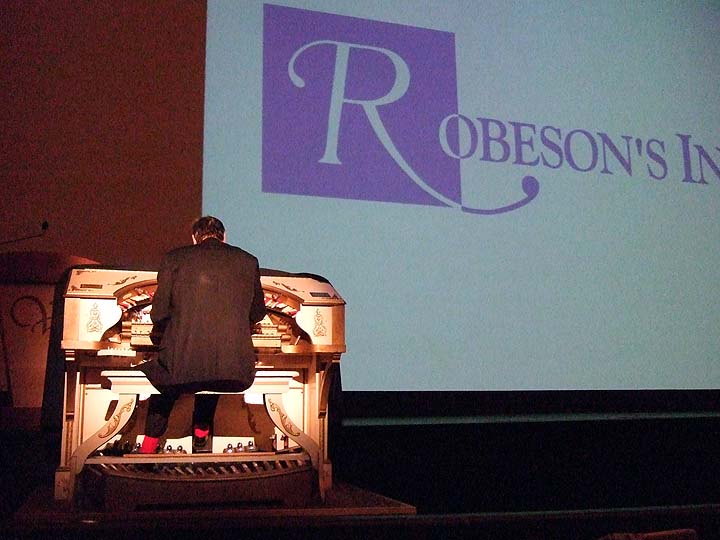 Organist Warren York plays between features at the Virginia. 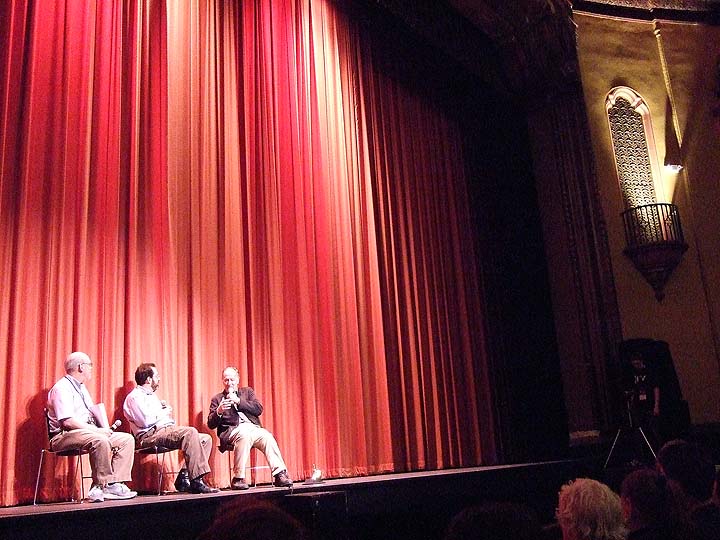 Even dwarves started small: David Bordwell, Michael Barker and Werner Herzog are dwarfed by the mammoth curtain and cavernous (but warm and inviting) interior of the Virgina Theater.