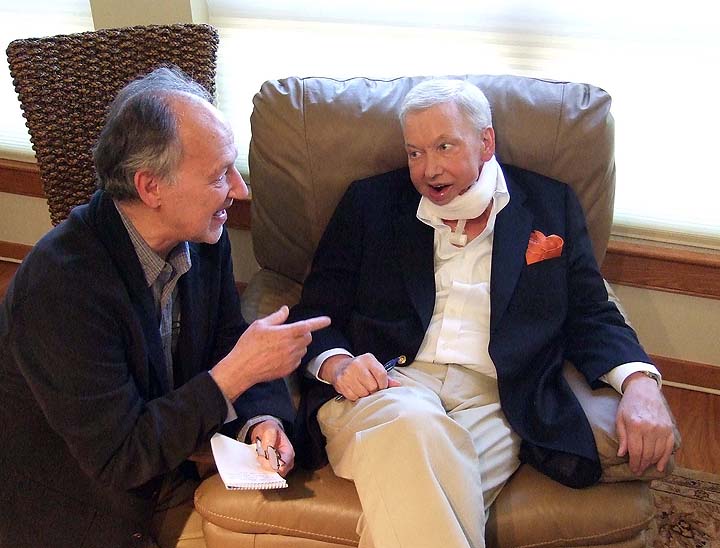 Director and longtime Ebert favorite Werner Herzog ("Stroszek") visits with Roger before the noon Sunday screening of "Beyond the Valley of the Dolls."

An experience like Ebertfest 2007 is beyond my capacity to convey in words -- and I'm not just talking about the movies. At one point I asked Roger if he was having as much fun as I was. He wrote on his pad: "The time of my life!" Sitting in his recliner in the back row of the Virginia Theatre in Champaign, IL, (his customary spot -- but this time with cushier accommodations and more legroom) he sure looked like he was having a blast. The rest of us had a fine time, too, as I hope you will see from these photos I took... 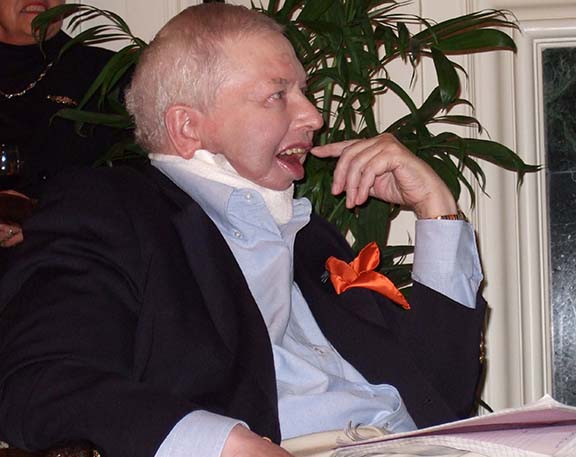 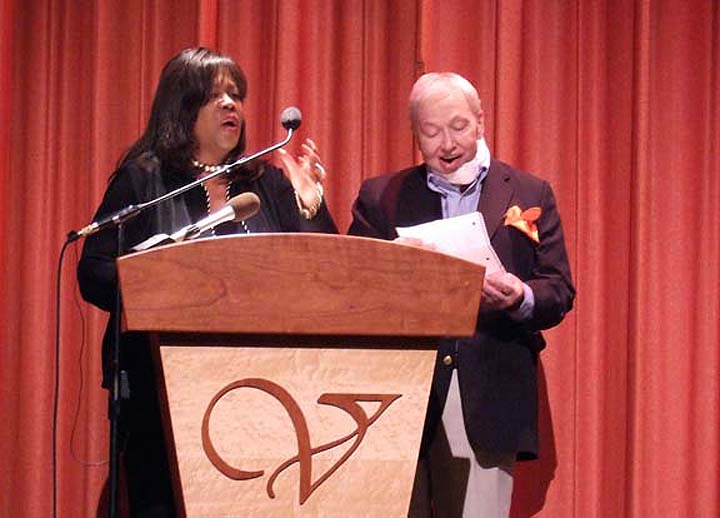 Chaz Ebert introduces her husband to the opening night crowd from the stage of the Virginia Theatre. 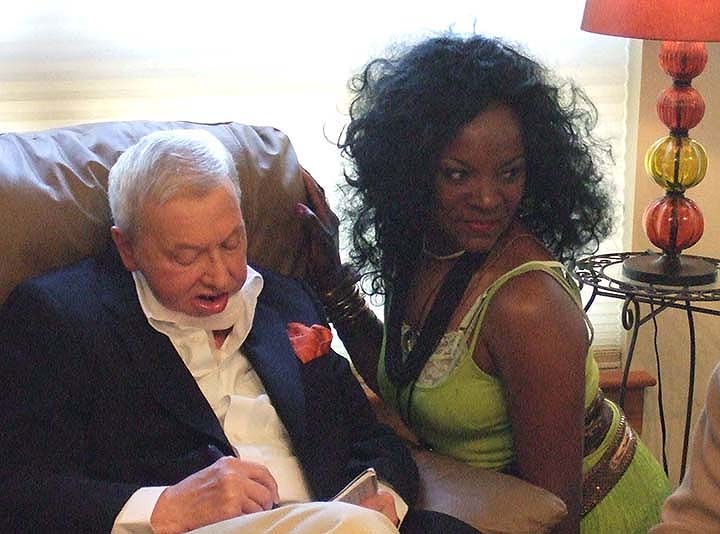 Roger with "Beyond the Valley of the Dolls" star Marcia McBroom-Small (Petronella, aka "Pet"). 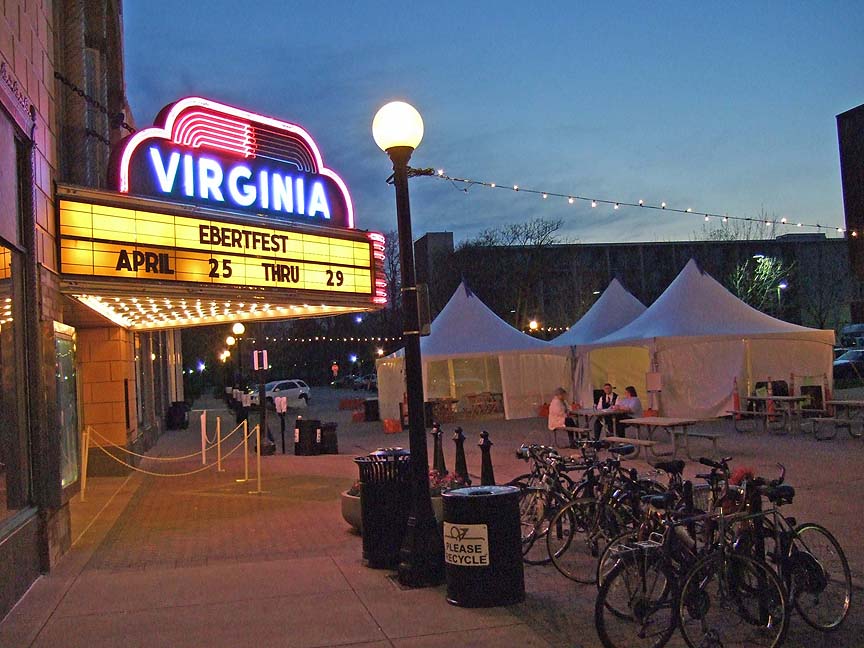 The crowd is in the house and all is quiet outside, just before "La Dolce Vita" hit the screen Friday night. 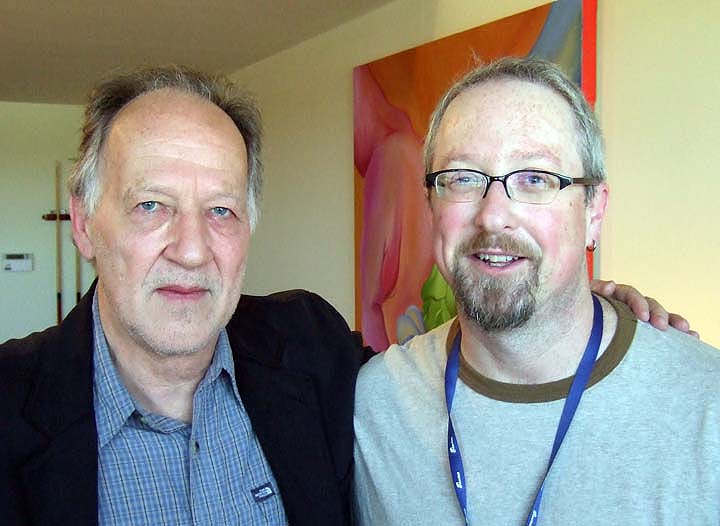 Werner und Ich. (photo by Eric Byler -- with my camera) 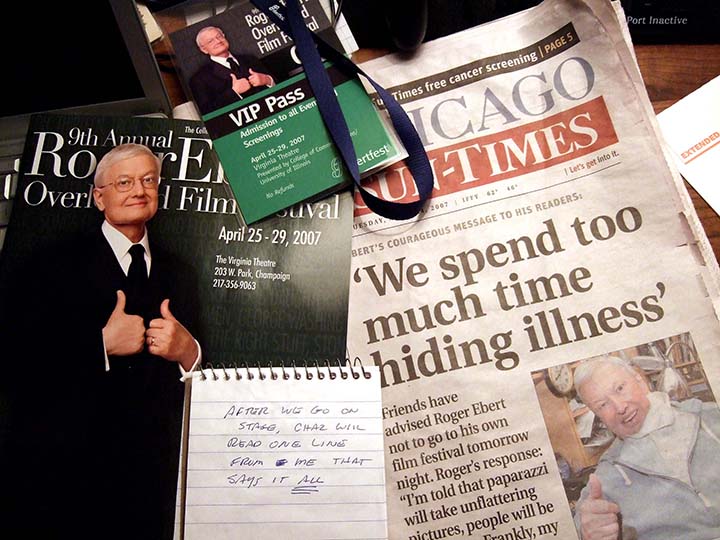 Ebertfest '07 begins with a bang -- on the front page of the Chicago Sun-Times. Enlarge to see Roger's note about Chaz's opening remarks -- which kicked off with the the immortal line from "BVD": "It's my happening and it freaks me out!" 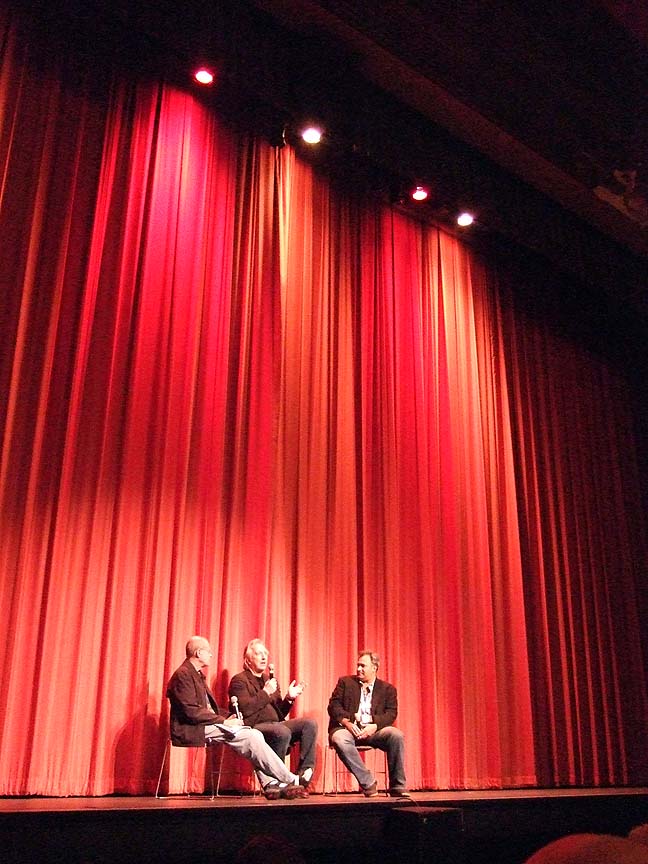 To give you an idea of the scale of the Virginia Theatre, here's festival director Nate Kohn, actor Alan Rickman and blogger David Poland on stage after "Perfume: The Story of a Murderer." The 'Scope movies -- "Gattaca," "La Dolce Vita," "Perfume" and "Beyond the Valley of the Dolls" (in a newly struck print) -- looked especially ravishing on this screen, with the expert projection of James Bond and Steve Kraus. 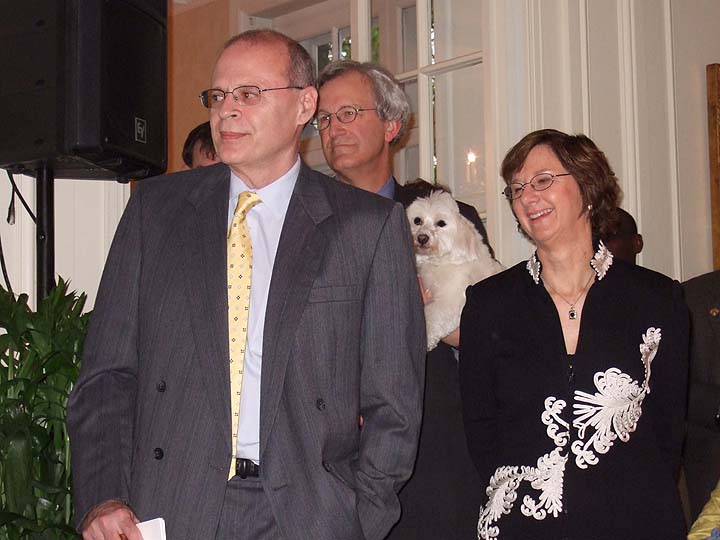 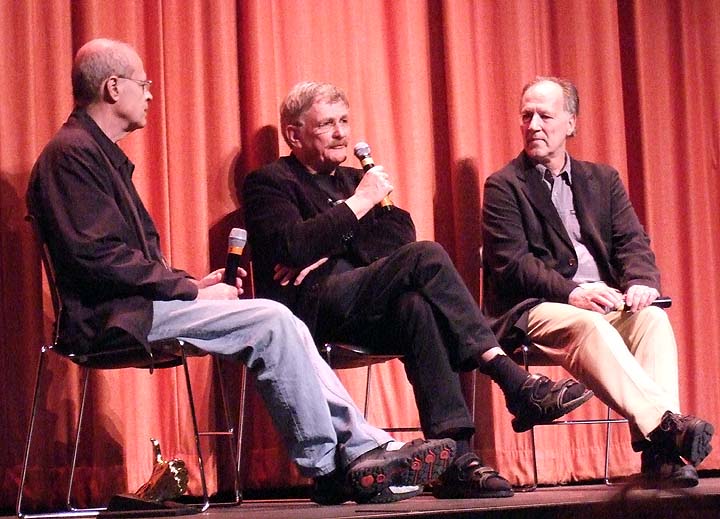 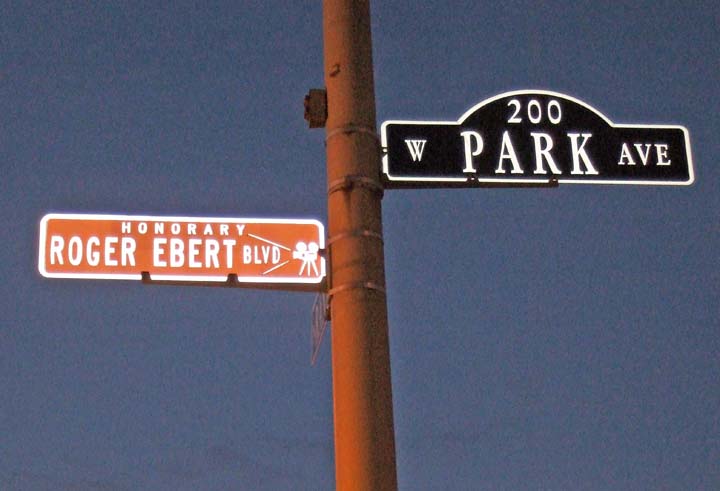 Meet me at the corner of Roger Ebert and Park -- location of the Virgina Theatre. 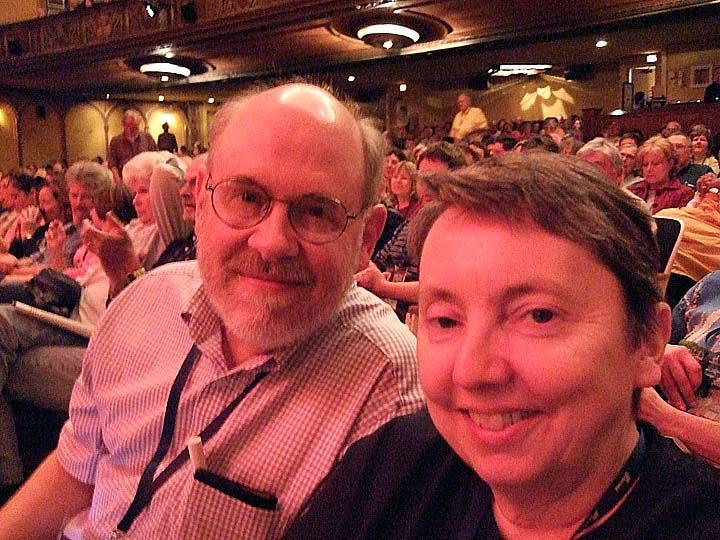 What an audience! David Bordwell and Kristin Thompson, third row, house right. No, they're not blushing. That curtain is RED. 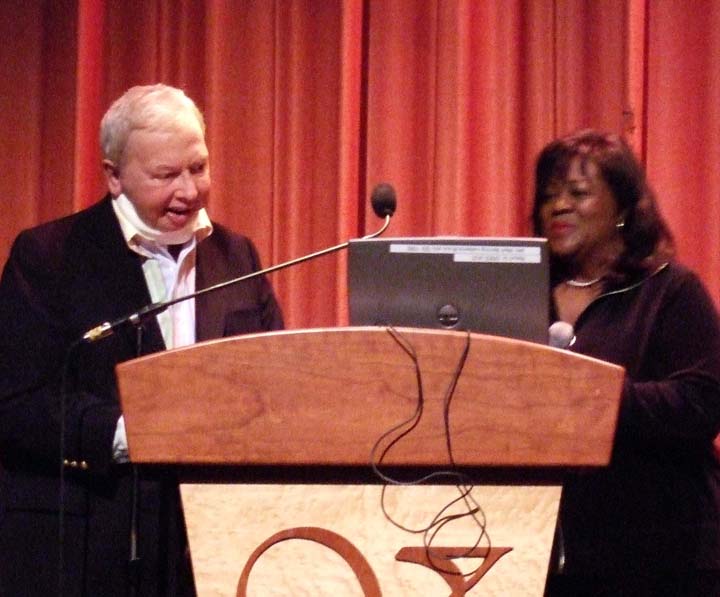 Roger and Chaz prepare to let the laptop version of HAL 9000 do the speaking for Roger before the matinee of "Holes." 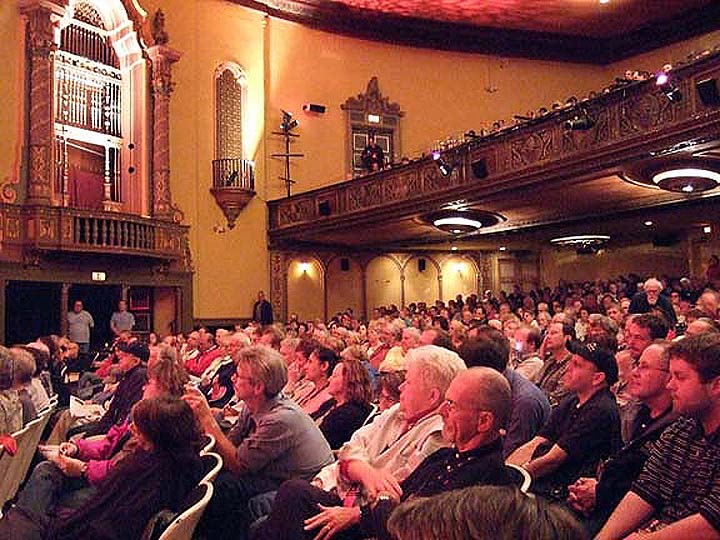 Big and beautiful: For most of the filmmakers who attend Ebertfest, this is the single biggest audience with whom they'll ever see their movie. It's an overwhelming experience. 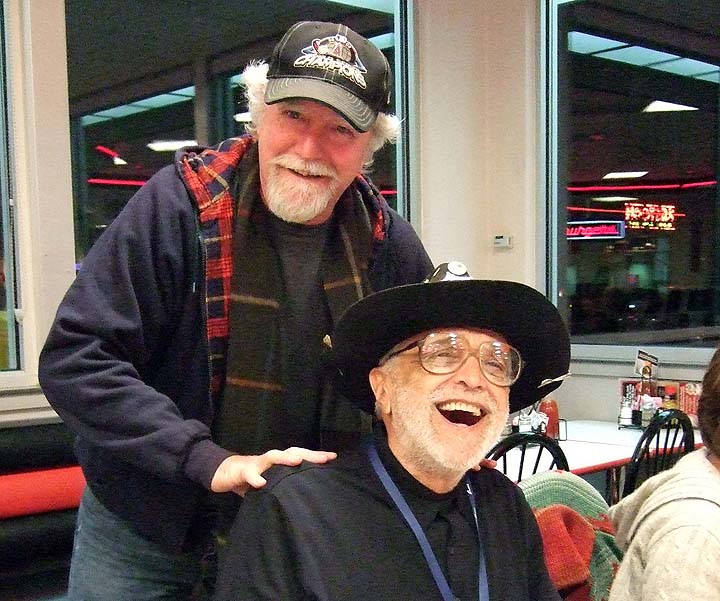 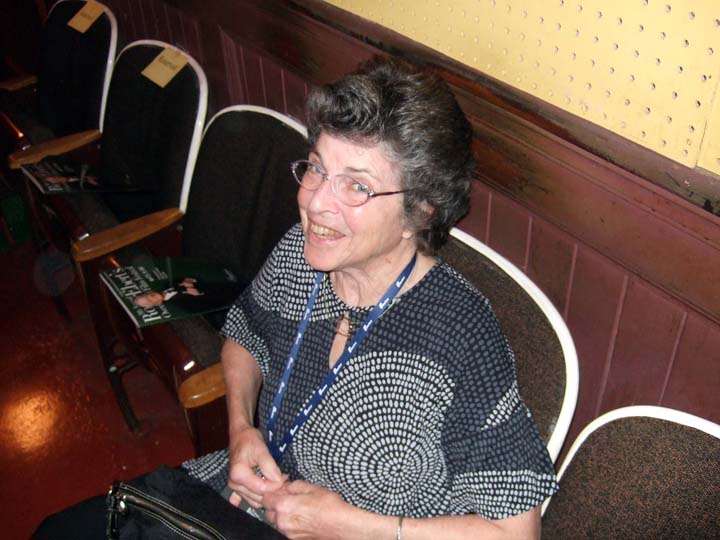 Lady Joan Cohl holds down the fort in the last row. 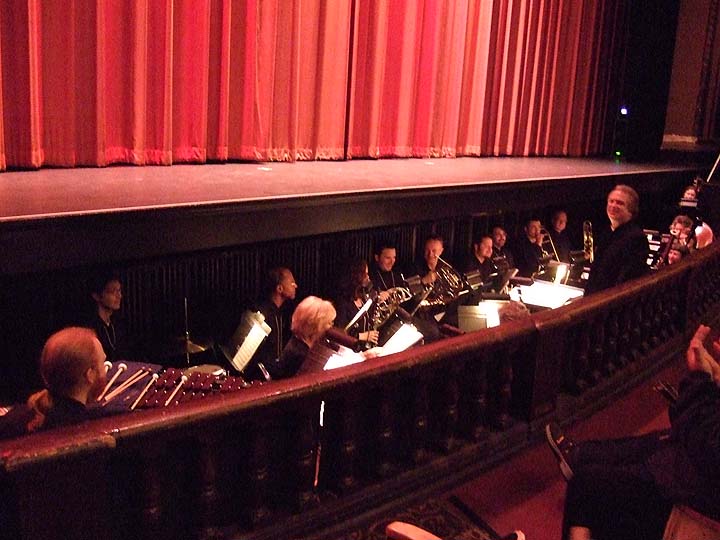 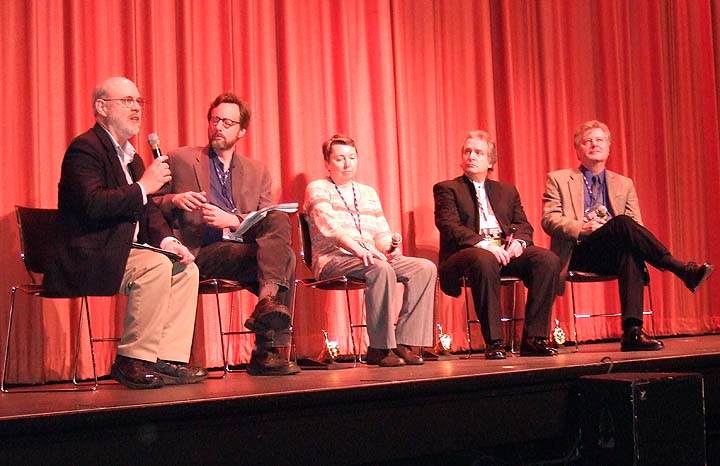 David Bordwell, Chicago Tribune critic Michael Phillips, Kristin Thompson, conductor Steve Larson and composer Joseph Turrin on stage after "Sadie Thompson" (introduced by her distant cousin Kristin). Note the thumb statuettes on the floor. These are the new models, cast from Roger Ebert's hand and made of the same material, and by the same company, as the Oscar statuettes.