Tracing the image #2: The rebirth of 'The Descent'

Whenever you watch a movie, you're also probably watching just about every other movie you've ever seen. The images that flash by trigger associations in your brain -- some of them deliberately planted by the filmmakers, others not. Still, you've got all these images and memories banging around in your head and they're going to connect with something no matter what.

As I wrote in my review of "The Descent" and subsequent postings, director Neil Marshall quite deliberately conjures up memories of other movies (especially, but not exclusively, horror movies) to evoke emotions and effects that have lingered in viewers' imaginations.

Take the "rebirth" of one character, who emerges from the ground coated in blood, like a baby from the womb. This image resonates with memories from a number of terrific movies. Before I get to a more detailed discussion, the usual **SPOILER ALERT** is in order -- not only for "The Descent," but several of its antecedents, including "Deliverance," "Carrie," "Evil Dead 2" and "The Third Man." OK, let's give these movies a hand!

First let's take a look at the shot itself, and the build-up to it. It's preceded by a couple of images as breathtaking as any in the history of horror: a climb up a subterranean stairway of bones toward the light, a painful, desperate ascent out of the darkness of the underworld. (There are a couple more shots between the spectacular frames I've chosen here.)

When Sarah breaks through the earth's crust, as it were, emerging back into the world from the underworld of Hades, the shot is brilliantly overexposed -- as your eyes would see things when coming out of the dark into the light. The shot begins with a narrow depth of field, flat and with the background washed out, but as it adjusts to a normal exposure, more and more of the surroundings come into view and it becomes fully dimensional. It's as if the the world is opening up for Sarah, the atmosphere itself expanding and becoming breathable again after the constriction of claustrophobically narrow, dusty and airless underground passages.

Sarah grasps the air and then gasps for it. Coated in blood as she emerges, she really does look like she's being (re-)born out of the earth. (But, of course, as we know, Hades is extremely reluctant to let anyone leave his underworld domain. One way of looking at the movie, if you read it through Greek mythology, is that all the characters are dead before they enter Hades.) 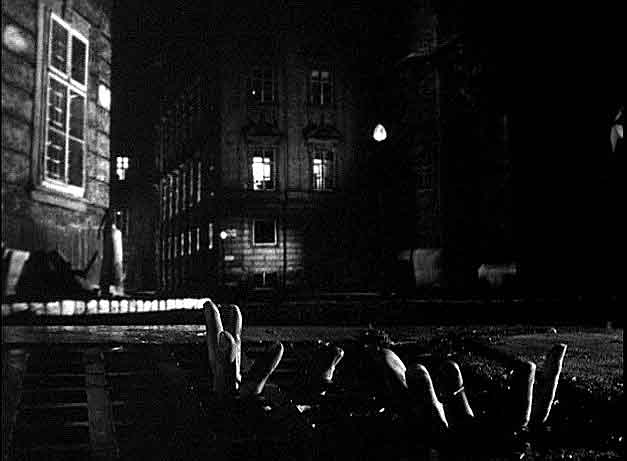 This is the first image that flashed through my mind when I saw Sarah's hand come up out of the ground, one of the greatest shots in all of cinema, from Carol Reed's "The Third Man": Harry Lime (Orson Welles), a terrible sinner thought to be dead, trapped in the sewers of Vienna, from which he will never emerge. I've written a lot over the last 20 years or so about the ways filmmakers have used plumbing (sewers, pipes, drains, toilets, showers, baths...) as metaphors for the human body and the human psyche -- the return of the repressed, often having to do with the cleansing or repression of guilt. In "The Third Man," Harry Lime is pure Id, opportunistic, solipsistic, concerned only with his own survival. He's a witty, crafty and intelligent shark in a black hat. Now, I'm not saying at all that Sarah is Harry Lime, but if you think of movies as a labyrinth (see "The Shining"), you must remember that the dead ends are just as much a part of the whole maze as the through-paths. Could Sarah be, in some respects, the unwitting villain of the piece? It's interesting to speculate about one movie in light of another it recalls. I'm doing a little critical spelunking here, and I'm not sure where this route leads, but I don't want to close it off...

This nightmare image from John Boorman's "Deliverance" is explicitly about guilt and the return of the repressed. The evidence of what Jon Voight and his pals (Burt Reynolds, Ned Beatty, Ronny Cox) did upstream is submerged under the water behind a new dam. But the memories are not. You have to wonder which haunts the survivors more: the knowledge of their guilt (even if it is "justifiable homicide") or the remembrance of their emasculating humiliation. Both, of course. In this image it's the hand of a dead man that rises from below the surface, which suggests provocative implications for the character of Sarah in "The Descent." If you see the original ending, you may wonder if she is a "survivor," or if the evidence of her and her compadres' crimes (murder, betrayal, adultery) will remain forever entombed below the surface. 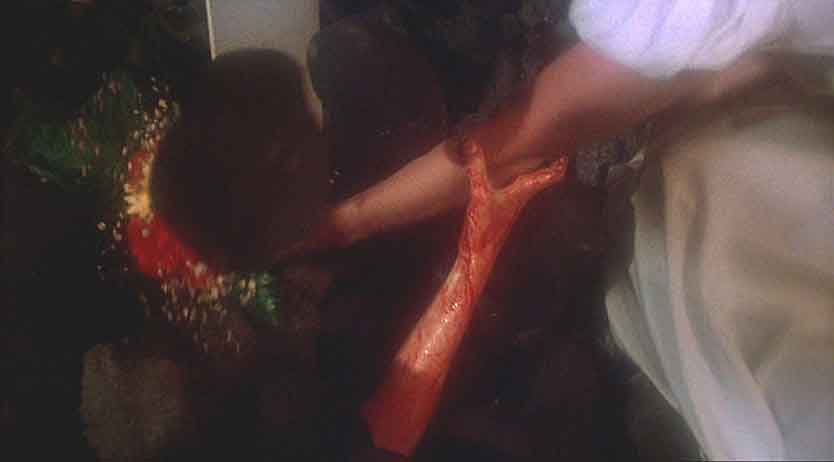 The effect of the grabber-ending of Brian De Palma's "Carrie" has never been surpassed. It, too, is a nightmare born out of guilt and fear, as Sue (Amy Irving), who has tried to be kind to Carrie (Sissy Spacek) only to have her efforts backfire spectacularly, resulting in multiple deaths, dreams of tenderly laying flowers on Carrie's grave, only to be grabbed by Carrie's bloody arm and pulled down into hell. It works so well for many reasons: De Palma shot some of the walk to Carrie's house/grave backwards, to give it a disconcerting dreamlike quality (watch the red VW bug reverse down the road, echoing the arrival of Sue's boyfriend, and Carrie's prom date, Tommy (William Katt) in an earlier shot from the same position. Also, there's a turbulent mix of emotions: Sue meant well, but she knows Carrie thinks she (and Tommy and Miss Collins, the sympathetic teacher played by Betty Buckley) was in on the scheme to humiliate her. How might this relate to "The Descent"? Think of Sarah as "Carrie," whose righteous anger is unleashed in the hellish flare-lit caverns, consuming the innocent and the guilty trapped within chambers as hellishly inescapable as Carrie's flaming high school gym. 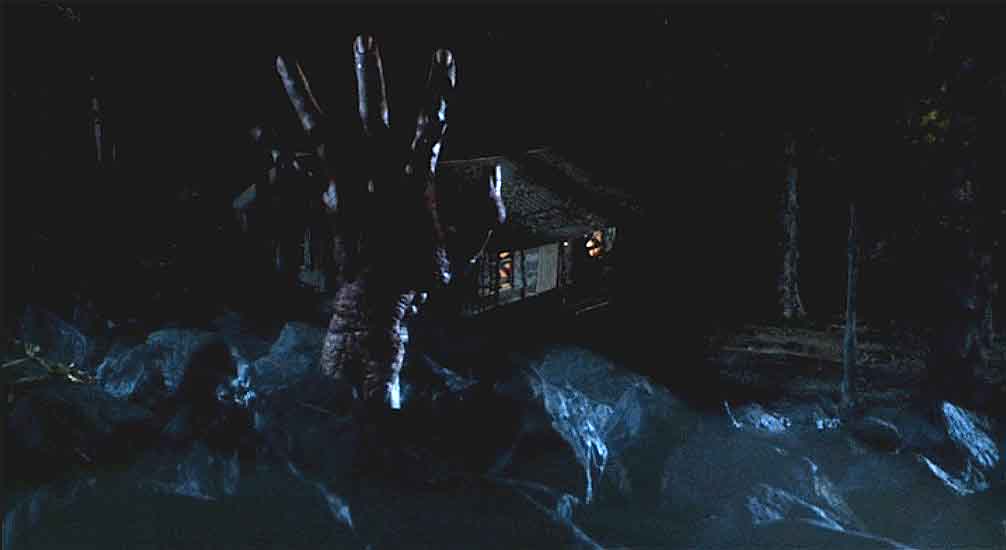 Horror cinema is rife with images of undead corpses rising out of the earth, but few as stylish and sprightly as this one from Sam Raimi's "Evil Dead 2." If you've seen the original ending posted earlier (and please note that I've added "The Descent" as its own category here, because you guys have generated the most fascinating and illuminating discussion of the film in Scanners comments), you know that there's a strong suggestion that Sarah is, in fact, deceased and has joined her beloved daughter in the land of the dead (aka Hades, which is not actually a synonym for "hell" but simply the underworld where the dead go).

I favor a reading of "The Descent" in which Sarah's life actually ends with the darkness chasing her down the hotel corridor, and the rest of the film is in her head -- cathartically processing her inchoate feelings of grief, fear and rage at the moment of her death so that she and Jessica (Paul, her apparently unfaithful husband, is conspicuously absent from her thoughts) can be together again. Sarah's homicidal fury at Juno is rooted in betrayal -- feelings that Juno betrayed her with Paul, and that she betrayed Beth by abandoning her to die (after accidentally inflicting the mortal wound). Whether those feelings are justified is ambiguous, but they're not the point; the point is that Sarah feels them, and the movie identifies strongly with Sarah.

If you look at the movie this way, Sarah's rebirth out of the earth is not unlike a corpse returning from the grave. She thinks she "escapes," but once purged (figuratively and literally, by vomiting) she finds Juno sitting right next to her. Is this an image of guilt and fear, not unlike Jon Voight's dream in "Deliverance" or Amy Irving's in "Carrie"? When Sarah awakens, she's not at home in bed with a lover or a mother -- she's alone back in the cave. But she's not alone for long: The familiar, comforting image of Jessica and her birthday cake soon reappears....