I would never want to read a screenplay before seeing the movie based on it. As a critic, in fact, it would be a violation of my responsibilities (and ethics) to do that. The film has to be seen on its own, as a completed work; a critic shouldn't rummage through the drafts before experiencing the finished piece -- whether it's a movie or a painting or a symphony. I'm even ambivalent about reading certain books before seeing the movie versions, too, and for the same reason that I don't like to see trailers, particularly of films I'm likely to write about: I don't want to harbor preconceived ideas (even unconscious impressions) when I watch the picture. As we all know, it's hard enough to get a clean look at a movie after all the advertising and interviews and seasonal previews and reviews...

But if you want to gain some understanding of how movies are actually made (movies in general and any movie in particular) it's often enlightening to go back and take look at how the screenplay (or various drafts, re-writes, polishes) evolved into the movie that eventually wound up on the screen. Some filmmakers like Clint Eastwood often claim to simply shoot a script "as written" (though he and Dustin Lance Black did some re-working, including adding a voiceover, on the "J. Edgar" screenplay). But it can be fascinating to see how the writer(s), director(s) and editor(s) shape the material throughout the entire process -- and how moving (or removing) images and lines from one context and placing them in another changes their meaning. This is now easier to do than ever before, because so many screenplays are available online -- legitimately (For Your Consideration at studio sites) and otherwise.

Warning: There will be spoilers

1 EXT. HUNGARY - BUDAPEST - 1973 - DAY 1 Budapest skyline, looking towards the Parliament building. From here the world looks serene, peaceful. Then, as we begin to PULL BACK, we hear a faint whine, increasing in volume, until it's the roar of two MiG jet fighters, cutting across the skyline. The PULL BACK reveals a YOUNG BOY watching the jets, exclaiming excitedly in Hungarian.

2 EXT. BUDAPEST STREET - DAY 2 LATERALLY TRACKING down a bustling street, as the jets scream by overhead. Pedestrians look up. All except one man who continues walking. This is JIM PRIDEAUX.

ACROSS THE STREET: More pedestrians. We're not sure who we're supposed to be looking at - the short stocky man? The girl in the mini skirt? The man in the checked jacket?

A car driving beside Prideaux accelerates out of the frame. Across the street the girl in the mini-skirt peels off into a shop. The stocky man turns and waves to us. But it isn't Prideaux he's greeting but another passerby, who walks over, shakes hands.

Now we're left with Prideaux and the Magyar in the checked shirt, neither paying any attention to each other.

Just as we are wondering if there is any connection, the two reach a corner and the Magyar, pausing to cross the road, collides with another passerby. He looks over and sees Prideaux has caught the moment of slight clumsiness and gives the smallest of rueful smiles. A tiny moment of contact between the two. Then both men walk on around the corner, just two strangers headed in the same direction...

3 EXT. SUBWAY EXIT - DAY 3 Shooting up the steps of the exit to the imposing GALERIA building on the corner ahead. Prideaux and the Magyar walk up the steps, still paying no attention to each other, and head towards...

4 INT. BUDAPEST - GALERIA - DAY 4 A formerly grand arcade. Many of the shops are now closed, the one's that are open don't have much to sell. A CAFE occupies the middle space under the high vaulted ceiling. A JAZZ ROCK band rehearses in one of the nearby disused shops, incongruous in the window, music muffled by the glass. Customers sit around tables playing chess, drinking coffee, a mother breast-feeding, the hum of chatter. The ordinary world.

This isn't exactly the movie (which cuts between these Budapest images and Control [John Hurt] asking Prideaux [Mark Strong] to undertake this mission), but it's thrilling to read because it captures how you do actually feel while you're watching the film -- the questions you ask yourself, the feelings you have about what's happening from moment to moment. "Tinker Tailor" is so engrossing precisely because it requires your attention; this isn't a movie that lets you just sit back while it "washes over" you.

One of the key observations in this sequence is that Prideaux doesn't react to the MiG flyover. It doesn't quite play that way in the film itself, but the principle is highlighted much later when Prideaux points out George to a kid (who shares the name "Bill" with his best friend) and asks why he doesn't appear to be paying attention to the schoolboys' antics. (It's the same visual principle as the tennis match in Hitchcock's "Strangers on a Train.")

The script has George Smiley (Gary Oldman) speaking relatively early on -- but in the film he doesn't utter his first words until roughly 18 minutes in. Also, Ricky Tarr (Tom Hardy) is identified when he first contacts Oliver Lacon (Simon McBurney). In the film, we don't seen Ricky's/Hardy's full-lipped, deliberately obscured face until much later. We hear him (a figure in a phone booth) quite early, but, fittingly, he only reluctantly emerges from the shadows well into the film. 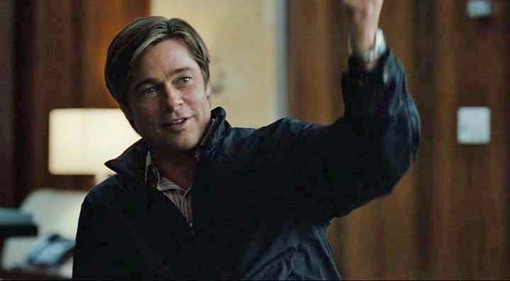 A few weeks ago, I used "Moneyball" as an example of how critics and reporters often misrepresent the ways movies are actually made -- by assuming, in this case, that the credited writers worked together on the screenplay, even though there's no ampersand between their names in the official screen credits. (Entertainment Weekly: "... the film's not-so-secret weapon is its screenplay, written by the powerhouse team of Steven Zaillian ["Schindler's List"] and Aaron Sorkin ["The Social Network"].) I've found five "Moneyball" screenplays on the web: A July 13, 2007 third draft by Stan Chervin (who has a "Story by" credit on the finished picture); a December 1, 2008 second draft by Steve Zaillian; a June 22, 2009 version by Stan Chervin, with revisions by Stephen Rivele, Christopher Wilkinson, Stan Chervin and Steven Zaillian; what appears to be the same script (dated June 22, 2009) credited to Zaillian and revised by Steven Soderbergh; and a March 6, 2010 version by "Steven Zaillian and Aaron Sorkin." "Moneyball" finally began shooting in July, with director Bennett Miller replacing Soderbergh.

I mention the movie's convoluted pre-production history not because it's all that unusual, but because the writing and re-writing continued all the way through production and post-production. I wrote about the moment I fell in love with "Moneyball," and wondered if this early scene (a conversation between Brad Pitt's general manager and the team owner) had been improvised. It certainly didn't sound like snappy, self-aware Sorkin dialogue. As it turns out, the only script that contained the scene was the Zaillian/Sorkin draft -- but it's not much like what's in the movie. 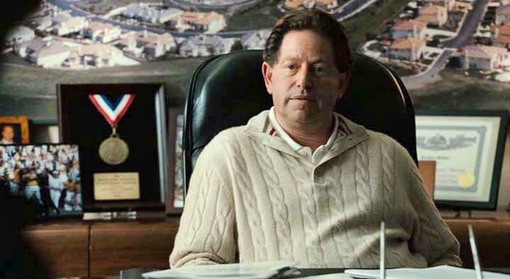 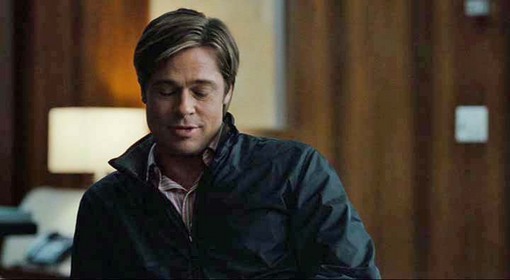 It starts on page 10, and includes this:

SCHOTT Take your wife and go to Hawaii.

BILLY When I come back from Hawaii I'll need more money.

BILLY I appreciate that but none of this calamitous week is going to melt away with the spirit of mahalo. I'm trying to beat the Yankees and the Red Sox with a third of their payroll. I need more money, Steve.

SCHOTT They're nice houses. For what they are, they're nice houses. You know what the faucets cost? It doesn't matter. You turn them on and water comes out. The same water that comes on at my house. It costs a hundred dollars but works just like the one that costs two-thousand.

SCHOTT I care what it costs because it's a cost to me.

According to a story by Alex Ben Block in the Hollywood Reporter, when Sorkin was approached to work on the film, he first called Zaillian, who was on vacation in Rome:

"I was standing on a side street just around the corner from the Pantheon," says Zaillian, recalling that Sorkin said "he was being asked to write some new scenes. And I said: 'That's better than dismantling the script. Try not to do that, if you can.' What I remembered most about the conversation was when I asked him what he'd do if I was calling to tell him what he was telling me. Without much hesitation, he said, 'I'd burn the studio down.' "

So how did my favorite scene come to be? I still don't know. According to Block's article, Pitt would go over to Sorkin's house in L.A. ("I wanted Brad to do most of the talking. He'd speak generally about his love of character-driven movies from the '70s," Sorkin said.) In an unconventional method, Zaillian and Sorkin continued to send pages, separately, to new director Bennett Miller ("Capote") who would edit and incorporate them:

"Passing a script back and forth, obviously, isn't the most enjoyable way to work and is usually a recipe for disaster," Zaillian says of their tag-team approach. "Important things can get lost in the shuffle. But at the end of the day, difficult as it was, it worked."

"Steve and I were now working at the same time," says Sorkin, "concentrating on different runs of scenes. It wasn't an ideal situation, but the point was, 'Whatever it takes to cross the finish line.' We were both courting the same girl, but we'd both invested way too much at that point to let ego stop us."

Or, as Miller told Variety:

I worked with both of the writers after I came on. They were many incarnations along the way. Stan Chervis did a draft. Zaillian came on. (Previous director Steven) Soderbergh did his version. Sorkin came on, and when I came on, I had all of these versions and the (Michael Lewis) book to look at. I took a few weeks with it all, and came back and pitched a final version. I should make a point: it's not like Zaillian did a draft and then Sorkin came on. It wasn't like that at all. Zaillian and Sorkin continued to work on it, and I continued to work on it right until the last day of the edit.

So, who knows who wrote what, or how much was improvised or re-written during shooting or even post-production? (Remember, Howard Hawks used to re-write on the set all the time, just to keep things fresh.) But no matter who's doing it, the writing isn't done until the picture is locked.