"Would you believe in a love at first sight?" "Yes, I'm certain that it happens all the time." "What do you see when you turn out the light?" "I can't tell you but I know it's mine." -- Billy Shears, Sgt. Pepper's Lonely Hearts Club Band

Sometimes I can pinpoint the very moment I first fall in love with a movie. It may happen in the first shot (Bong Joon-ho's "Mother"; Michael Haneke's "Caché"), or may be clinched in at the very end (the terminal instant of Rahmin Bahrani's "Man Push Cart"), but in many cases there is an identifiable point at which I know that I am in love, even while the movie is unspooling, and by that time it's not likely there's any going back, unless the movie simply implodes.

Here are a few of those times from 2011 when I realized I was falling hard...

There's not so much snow as in director Tomas Alfredson's previous feature, "Let the Right One In," but it gets plenty chilly here, in Cold War London, Budapest and Istanbul. The emotional iciness sneaks up on you: by the end, as the strands of loyalty and betrayal unravel, leaving characters exposed to some very cold realities, I found it uncommonly moving. (Yes, I cried -- more than once.) Not unrelatedly, "Tinker Tailor" (no commas in this title) is one of the most hauntingly and imaginatively composed movies (both in terms of framings and shot sequences) that I've seen since... maybe the last Coen brothers picture. Early on, it catches you a little off-guard when, in the midst of a hushed, paranoid conversation in a musty apartment, there's a cut to a monochromatic, neo-Gothic Eastern European skyline (punctuating John Hurt's use of the word "Budapest" -- a word that will become code for loss, failure, disgrace).

Suddenly, a pair of MiG fighters roars out of the distance and passes overhead as the camera glides backwards, with uncanny smoothness, in a perfect, vertiginous motion. This cooly executed dolly shot brings schoolchildren into the foreground, excitedly gawking and pointing and yelling, while framing the original view with pillars and archways -- but the Hungarian Parliament building at the center of the cityscape, on the far side of the gray Danube, somehow remains exactly the same size and in precisely the same position in the frame. The vista and the camera movement are most likely separate composited images, but however it was done, it's dazzling and it made me sit up and pay attention. (The screenplay, which varies significantly in structure from the finished film, begins with this shot.)

I was certainly intrigued by this point, but I didn't fall head-over-heels until a bit later. It's approximately 18 minutes into the film before George Smiley (Gary Oldman) says his first lines: "I'm retired, Oliver. You fired me." Shortly thereafter, he and his junior associate Peter Guillam (Benedict Cumberbatch) visit a retired Special Branch man, Mendel (Roger Lloyd-Pack), who is a beekeeping hobbyist. The visit itself is just one brief shot, with Mendel mumbling over his bees in back of his house, while George and Peter approach him from behind. The next shot is this rear view of a Citroën DS (we do a lot of "following" the backs of people's heads in this movie -- they're no more difficult to read than faces), which is interesting enough, given the aerodynamic contours of the vehicle. Yet, there are all kinds of other things going on here, too.

The colors, for one, are extraordinary: grey, white, beige and amber/yellow. The camera seems to be locked onto the car, but not quite. (A process shot of some kind, I guess.) A stowaway bee is buzzing around the interior. Peter, in the front passenger seat, tries to swat it away. George, in his patient, unassuming way, observes it, opens his window a bit at the opportune moment, the bee flies out, and he rolls up the window again. A shing-shot (16-second?) character scene, with no faces and containing one line of expository dialog (Mendel: "There's a place I know, sir. Little hotel near Liverpool Street.") What more do you want to know about George's personality and methods? Some have described "Tinker Tailor" as elliptical, but it's more than that: It's breathtakingly economical.

The first conversation in the Oakland A's owner's office -- basically the second scene in the film -- after they've lost the division series to the New York Yankees. In the flat, grey, morning-after daylight, the air seems to have been let out of the room. In deflated, gently stoic voices, Billy Beane (Brad Pitt) and Steve Schott talk about what a great year it was, how much they and the team have to be proud of, how close they came (Billy gestures, as if grabbing at the brass ring, only to come up empty). It's a marvel of a scene, in which the characters say the things you would expect them to say under the circumstances, and in which you sense their personal ambitions and frustrations bubbling up (as David Lynch likes to express it) from below the cordial surface. 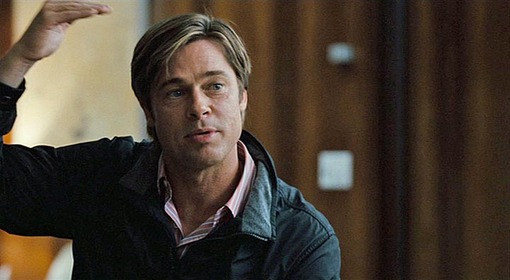 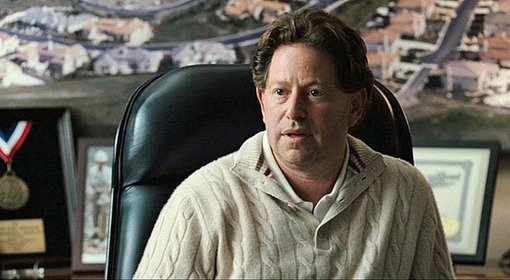 The function of the scene is purely expositional, spelling out the story's premise -- Oakland doesn't have the payroll budget to compete with the big teams -- but it doesn't feel like it was written for us in the audience. It feels like you're there, in the room, a fly on the wall. Perhaps it's a vestige of the approach Steven Soderbergh had planned, in which much of the film would be improvised, and shot documentary-style, with some of the principals playing themselves in direct interviews and "re-enactments." Whatever it is, it works like a charm. But it doesn't feel like a "documentary," either; there's no phony, hand-held shakiness to remind you that there's a camera crew in the room. 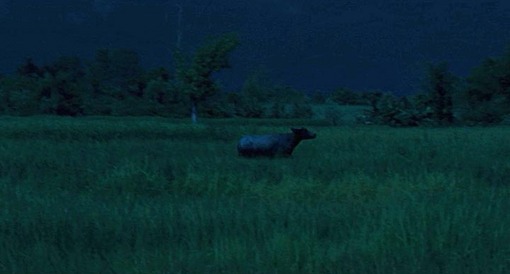 Uncle Boonmee Who Can Recall His Past Lives

It begins with a bovid (water buffalo?) tied to a tree on a deep blue-green night. Because of the title, and my familiarity with previous Apichatpong Weerasethakul film-worlds, I assume that this is a former incarnation of Uncle Boonmee, who we haven't otherwise met yet. We spend a few seconds getting to know him, his snorts and grunts. He pulls on the rope and gets loose, trotting -- then galloping -- toward the forest. From across the field we see him gliding fleetly through the tall grass, like a silent speedboat. I am in love. And I will follow him anywhere. 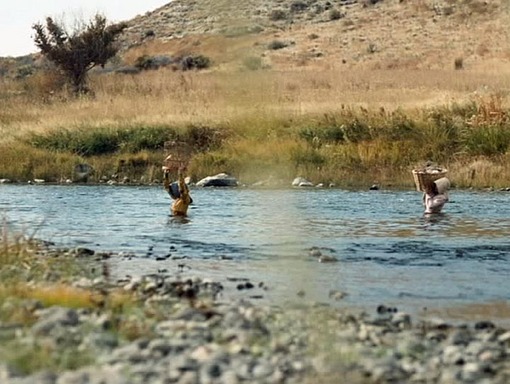 The mule- and horse-drawn wagons are rolling unsteadily across the hot, dry land of the Oregon Territory. The women, in their pastel frocks (pink, yellow, green), walk alongside them. Between their bonnets and the men's wide-brimmed hats, it's hard to see the travelers' shadowed faces in the harsh sunlight. From a distance (through unfocused blades of dry grass) we see two women crossing a small river, one holding a basket on her shoulder and another raising an inhabited birdcage above her head. The effect is reminiscent of the opening of Werner Herzog's "Aguirre, the Wrath of God" -- these tiny, fragile reminders of Western civilization, painstakingly transported, piece by piece, over a wild, rugged, inhospitable landscape.

Near sunset, cloud formations lay across the horizon like hills, and (during a slow, almost imperceptible dissolve), men on horses appear to walk across them, ghost riders in the sky. 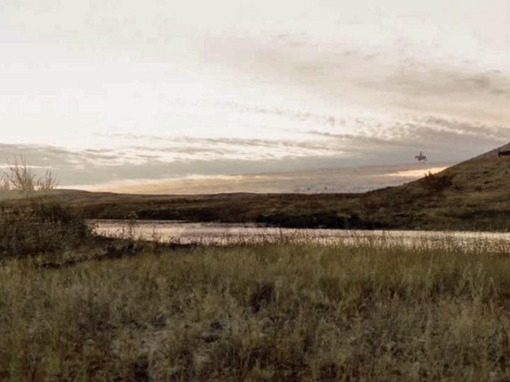 "Meek's Cutoff" is like looking at the very DNA of the pioneer Western ("Wagon Master," "She Wore a Yellow Ribbon") -- just as last year's "Sweetgrass" was the essence of the cattle drive Western ("Red River," "The Far Country"). It's a good thing I was watching this on a nice big HDTV at home, because I couldn't help but exclaim at the screen: "Holy shit! That's fantastic!" The adrenaline and dopamine kept flowing for the rest of the picture, and (spoiler alert) by the end, I was yelling and pointing at the location of the Columbia River. (Being somewhat familiar with the border between Oregon and Washington, I swear it's there, just out of sight, between the brown and grayish rises in the final shot.)

"Meek's Cutoff," "Uncle Boonmee" and "Tinker Tailor" are the kinds of movies that big screens and Blu-ray were made for. 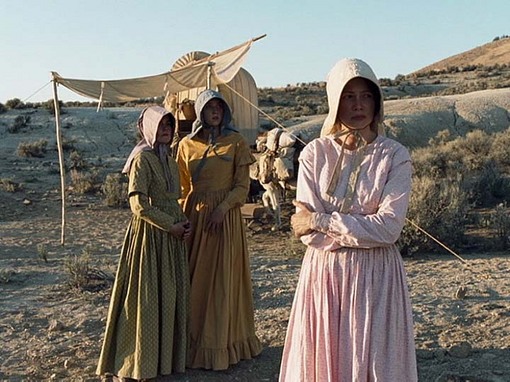 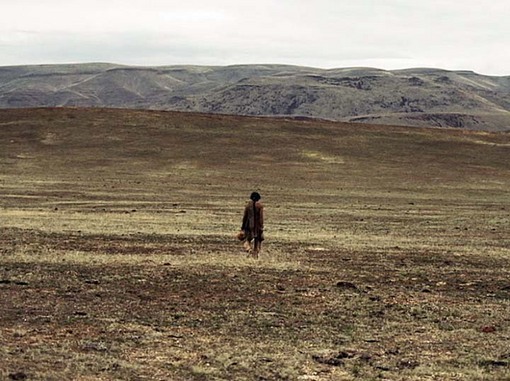