TIFF 08: The Coens Who Came In From the Cold

In a Coen Brothers movie every pause and stutter, every "um" and grammatical (mis-)construction, every repetition and idiosyncratic pronunciation, is inscribed like a note on a musical staff. The composer-conductors write the music, indicate the pitch, tempo and duration of each passage, and the select musicians -- soloists and ensemble players -- attack their assigned parts with the virtuoso flair for which they are known. As composers have often written works specifically suited to the talents of their favorite musicians, so the Coens frequently write roles tailored to the individual actors they want to work with. 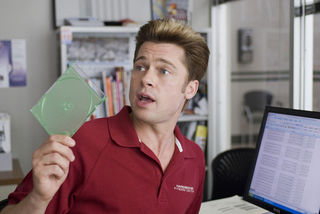 "Burn After Reading" is a deft little piece, directed with a straight face and performed with a roiling comedic energy that matches brio with precision. That's what makes it funny. Emmanuel Lebezki's cinematography, Carter Burwell's score, Roderick Jaynes' editing (yes, we all know that's a pseudonym) could proudly serve any modern espionage picture. All serve a ridiculously plotted absurdist farce, which is what the best spy stories usually boil down to, whether they're comic or tragic.

Inside this tight framework, the actors work with finely tuned gusto. As broad as they may be, these performances are exquisitely nuanced and controlled. They range from the managerially Pinteresque (Tilda Swinton, Richard Jenkins, David Rasche, JK Simmons) to the outright Looney Tunes (Brad Pitt, George Clooney, Frances McDormand, John Malkovich). Nobody gets sloppy, even when their characters are out of control. 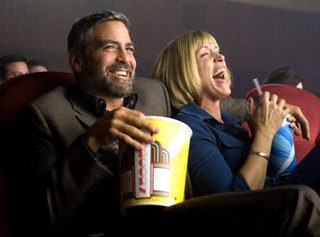 "Burn After Reading" belongs on the lighter side of the Coens' corpus, with "Raising Arizona," "Hudsucker Proxy," "The Big Lebowski," "O Brother, Where Art Thou?," "Fargo" -- not just because it tilts toward the funny but because it doesn't plunge into the darker, bleaker humor of "Blood Simple," "Miller's Crossing," "Barton Fink," "The Man Who Wasn't There" or "No Country for Old Men" -- and it doesn't intend to, either. Still, there's a pristine Kubrickian bite to the work of the maestros Coen that reminds me of "Dr. Strangelove." Some of the performances here are as broad as George C. Scott's or Slim Pickens' in Kubrick's movie; others are as tightly tamped down as Sterling Hayden's or Peter Sellers' (as President Merkin Muffly, that is).

Kubrick and Terry Southern decided, in attempting to adapt Peter George's thriller novel "Red Alert," that the best way to tackle the material was to address the absurdity of it head-on. I got the feeling that's what the Coens were doing with the modern intelligence thriller "Burn After Reading," too -- though their ambitions here are more limited and the stakes considerably (and deliberately) punier. This is a movie about small-time spies and would-be spies who take themselves much more seriously than anyone else does. When JK Simmons delivers his version of Marge Gunderson's final "Fargo" speech at the end of this picture, the intent and effect is to turn Marge's sentiments on their heads -- trivializing the events of the film to emphasize the futility and meaningless of it all. (The Nihilists of "The Big Lebowski" would approve.)

Oh, OK, and here's the basic premise: Two employees of a D.C.-area Hardbodies Gym -- hyperactive trainer Chad Feldheimer (Pitt) and self-actualizing salesperson Linda Litzke (McDormand) -- come into possession of a data CD they believe is filled with state secrets from the "mem-wahs" of intelligence analyst Osborne Cox (Malkovich), whose brittle wife (Tilda Swinton, in a twist on her Oscar-winning role in "Michael Clayton") is conspiring with personal security veteran Harry Pfarrer (Clooney) to... That's all you need to know. Everybody in the movie is really, really clueless -- even the top spies, who have no idea of what to make of the other characters' dumb moves. It's funny because it's true.

I have a feeling that, as with most Coen movies, "Burn After Reading" will reveal further, subtler layers of juicy comedic deliciousness on repeated viewing -- and on cable, satellite and DVD especially, where the performances will perhaps be seen in more efficacious proportions.

Meanwhile, this film has the distinction of being the only political espionage comedy I know of to reference one of the greatest of all political espionage comedies, Theodore J. Flicker's still-relatively-obscure "The President's Analyst" (1967), starring James Coburn, Godfrey Cambridge and Severn Darden. The latter plays a lovably amoral Russian intelligence agent named Kropotkin. A Russian embassy official in "Burn After Reading" is named Krapotkin (same pronunciation). That makes me happy.

P.S. I don't know when or if I've ever used the word "efficacious" in a written piece before, but it seems like something that should be associated with a Coen Brothers movie, don't you think? I hear John Mahoney employing it in "Barton Fink," or Clooney in "O, Brother...".