The snatch and how to grab it 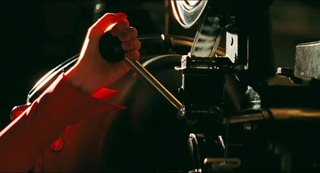 "As a sequence is being cut, the cutter should know where a particular setup most effectively presents the information needed for that particular part of the scene. In other words, he will stay with the shot as long as that shot is the one which best delivers the required information and cut to another shot only when the new cut will better serve the purposes of the scene, whether because the size is more effective, the composition is more suitable, or the interpretation is superior.... In short, as long as the scene is playing at its best in the selected angle, leave it alone!" -- veteran Hollywood director Edward Dmytryk ("Murder, My Sweet," "Crossfire," "The Caine Mutiny"), On Film Editing (1984)

Steven Boone at Big Media Vandalism says he gave up on film criticism (for the fourth or fifth time) this year:

I quit film criticism because somebody has banished the shot from mainstream commercial cinema.

That unit of film composition which lends film its cumulative power and structural integrity.

In place of the shot, like a leaky sandbag in place of a brick, somebody put... Well, what to call it, this fragment of film that has more in common with a spontaneous cutaway during Monday Night Football than with the ruminative, kinetic moving image discovered by Kuleshov, Porter, Griffith, et al? I once jokingly called it a gotcha-fragment, but that doesn't quite get it. The word for "shot" in the new century shall be...

Reading Boone's impassioned personal essay, "Inglourious Snatch," is a rewarding, cathartic experience for me. It does my heart good to witness one man standing up for the cinematic values he believes in, the very essence of what drew him to movies in the first place. And I don't have to endorse all the examples he lists to fully appreciate what he's saying.

The various snatch-enabling technologies (non-linear editing, DVDs, portable media devices) aren't themselves invariably "evil," Boone says, but they have contributed to the erosion of cinematic infrastructure, which relies on the integrity of the shot. As David Bordwell wrote in his essential piece, "Unsteadicam chronicles," about the combination of such techniques as the "shaky-cam," choppy cutting, and frenetic camera movement:

The run-and-gun style is indeed visceral, but let's be aware of how it achieves its impact. I've argued in Planet Hong Kong that the clean, hard-edged technique of classic Hong Kong films allows extravagant action to affect us viscerally; by following the action effortlessly, we can feel its bodily impact. We're shown bodies in sleek, efficient movement that gets amplified by cogent framing and smooth matches on action. But in the fancy run-and-gun style, cinematography and sound do most of the work. Instead of arousing us through kinetic figures, the film makes bouncy and blurry movement do the job. Rather than exciting us by what we see, ["The Bourne Ultimatum" director Paul] Greengrass tries to arouse us by how he shows it. The resulting visual texture is so of a piece, so persistently hammering, that to give it flow and high points, Greengrass must rely on sound effects and music. As a friend points out, we understand that Bourne is wielding a razor at one point chiefly because we hear its whoosh.

What else does the handheld style conceal? Since the 1980s, in many action pictures the cutting has become so fast, and often capricious, that we can't clearly see the physical action that's being executed. That complaint is justified in "The Bourne Ultimatum," certainly, but here the style also seeks to make the stunts seem less preposterous. Instead of showing cars crashing and flipping balletically, Greengrass barely lets us see the crash. All the conventions of the action film are smudged in "The Bourne Identity," as if a sketchy rendering made them seem less outlandish. In a Hong Kong film, Bourne in striding flight, grabbing objects to use as weapons without missing a beat, would be presented crisply, showing him executing feats of resourceful grace. But many viewers seem to find this sort of choreography outlandish or cartoony. So when Bourne plucks up pieces of laundry and wraps them around his hands to protect them when he vaults a glass-strewn wall, Greengrass's shot-snatching conceals the flamboyance of the stunt.

Remember, we're talking about mainstream narrative movies here. When some of us lament the pervasive visual incoherence in contemporary movies (especially the lack of thrills and momentum in flatly composed "action" sequences), we are sometimes compared to fogies who complain that this rock 'n' roll noise is corrupting the young people of today. After all, snatch and grab (or what DB calls "run and gun") is a currently fashionable style, the kids seem to like it, and all styles are equally valid. It's like complaining that Impressionism is fuzzy, or that Abstract Expressionism isn't photorealistic, right?

Wrong. Impressionism is not striving for clarity, and Abstract Expressionism isn't representational art. But a mainstream narrative movie that's trying to create thrills and suspense without an understanding of basic film grammar is simply failing to achieve the desired effect. (Likewise, it's not "Godardian" because it's not doing what Godard was doing -- or interested in doing.) Try painting an Ed Ruscha gas station using Jackson Pollock's technique and you'll get something, but it won't look like a gas station. (See DB's "But what kind of art?.)

Fast cutting is not necessarily the same as "snatch and grab." A director can cut fast and remain coherent if the shots are composed so that the relationships between them matters. (Check out a Hitchcock or De Palma set-piece for a textbook example: the "Psycho" (1960) shower scene or the climax of the prom scene in "Carrie," which is a splendid example of combining long takes, quick cutting and split screen.) As DB writes:

... [The] director who is just (apparently) snatching shots doesn't have to worry about building up performances slowly; s/he can simply give us the most minimal, stereotyped signals in facial close-ups. Lengthier shots let the actor develop the character's reactions in detail, and force us to follow them. Classic studio cinema, with its more distant framings and longer takes, lets you follow the evolution of a feeling or idea through the actor's blocking and behavior. The villain in the average Charlie Chan movie displays more psychological continuity than the nasty agents in "Bourne Ultimatum."

Moreover, run-and-gun technique doesn't demand that you develop an ongoing sense of the figures within a spatial whole. The bodies, fragmented and smeared across the frame, don't dwell within these locales. They exist in an architectural vacuum.

(For contrast, please see my frame-by-frame analysis of a fragment of "The Bourne Supremacy," "Sudden Impact.")

Boone also links to "The lost art of film editing," a 2006 essay by Jessica Winter (The Rough Guide to American Independent Film), in which the author reports on the increasingly powerful, risk-averse filmmaking-by-committee that determines so much of what we see at the multiplex and the art house:

"You always hear things like, 'We need to put more energy into this scene,"' says Tim Streeto, who edited "The Squid and the Whale" and has also worked on films by Ang Lee and Steven Soderbergh. "That can translate into quick editing, where you go back and forth between two characters like a ping-pong match." [...]

"There is much more pressure on an editor to try to do something 'noticeable,"' [editor Steve] Hamilton ["Simple Men," "Henry Fool"] says, "or perhaps there are more editors who've grown up thinking that they have to make edits that are noticeable, whereas before the goal was simply to tell the best possible story and to do so relatively invisibly. I think this mentality is leading to a mistrust of the shot."

As for Boone, he says it was the respect for the shot manifested in Quentin Tarantino's "Inglourious Basterds" that pulled him back in -- to movies and writing about them:

But it has taken Tarantino, with his infectious love of violent scenarios and grindhouse grand guignol to sell classical film technique not as a quaint alternative to snatch cinema but as the most vital, elastic and essential use of the form. Without shots, cinema disappears, and the movie house becomes just another noisy rec room. [...]

In a summer still reacting to last year's snatch apotheosis, "The Dark Knight," "Inglourious Basterds" stepped in to assume the role of proper tutor. Whatever Tarantino's intentions, I happily project onto his film profound outrage at "TDK"'s senseless, anti-human use of screen time and space, along with an apostle's commitment to sharing his enlightenment with the deprived.

Spoken like a true cinematic patriot. Yep, he's back. Welcome back, Boone!