Under cover of The Dark Knight 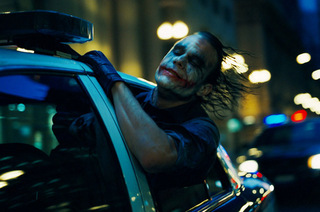 It wasn't very far into "The Dark Knight" that the feeling first took hold of me: All this movie needs is a script and a director and it could be really, really great!

By the end I'd had a good time, and I already know I'd like to see it again. Maybe, I've been thinking, it's kind of like a good album that's been haphazardly sequenced, with a few lackluster (or even bad) songs and occasionally dumb lyrics, muddled arrangements, or klutzy production choices. But, you know, after a while you're willing to overlook the parts that don't work in order to enjoy the parts that do. At first exposure, those rough spots stick out and even hurt. Later on, you just accept them, get used to them, or even choose to ignore them.

Two and a half weeks into its theatrical release, is it still a sacrilege to believe, for any reason, that "The Dark Knight" is less than the greatest whatever ever? I sure hope not, because I wanted it to be great as much as anybody else. So, I front-loaded this post with my tempered impressions of "The Dark Knight" only to contrast them with the consensus opinion, which is, you might say, considerably more enthusiastic.

(Part 1 of these ruminations about "greatness" in art can be found here.)

I cracked wise in most cases, saying, no, it's the best movie this month, or this summer. I talked about how much I liked the movie, with reservations, and Heath Ledger's performance, without reservations. But, of course, what was really being requested of me here was validation -- a professional media-guy's acknowledgement that "Knight" was in fact the pop tsunami so many moviegoers, primarily young ones, saw it as and needed it to be. [...]

Audiences applauded the opening credits, cheered every one of Ledger's lines, shrieked with delight at the action setpieces. Standing ovations at the end, packed houses full of instant friends. As happens only once every decade or so, the entire moviegoing population of America became welded into a single breathless entity, and the result was a pop event on the order of the Beatles appearing on Ed Sullivan. Go ahead and scoff at the analogy, boomers, but one of the kids at the memorial service likened the opening of "Dark Knight" to the JFK assassination and the Challenger disaster as quintessential where-were-you defining moments of his generation.

That says much, about both this movie and the callowness of smart young men -- the correct analogy is to "Titanic" or the final installment of "The Lord of the Rings" -- but a pop event has always created its own sense of necessary immensity. "The Dark Knight" has to be the best movie of all time because it feels that way right now, and because it feels impossibly exhilarating to share that thrill with everyone you know and millions of people you don't.

When we were in college, a music critic friend of mine who delighted in making "best ever / worst ever" statements proudly (and sincerely) proclaimed that Bob Dylan's "Blood On the Tracks" was the single greatest artistic achievement in the history of mankind. We teased him about the hyperbole, but I admit I liked him all the more for saying it.

Unguarded, unbounded enthusiasm is a wonderful thing to behold, to feel, and to share. Yes, I'm a critic and have been all my life (even before I knew it) and I'm probably as enthusiastic about critical values (including context, historical perspective, etc.) as I am about the movies themselves. I can get just as passionately engaged in trying to pinpoint and articulate what works (gloriously) in a movie I love, as I can in trying to pinpoint and articulate what's wrong or lacking (ignominiously) in one that I loathe, or even find mildly disappointing or tepidly enjoyable. A movie doesn't have to be good to be interesting, or worth talking about. Often I'll find the discussion, and the effort put into it, to be more exciting and illuminating that the movie itself. (See The Funny Games experiment.)

I waited a couple weeks to see "The Dark Knight" and I even though I felt lukewarm about the movie, I couldn't wait to talk about it. (Silly me: I thought there would still be lines and crowds. I went to a late afternoon weekday matinee... with about two dozen other people. I figured everybody else had seen it already.) I can understand how this movie (like, say, "Jaws" or "Star Wars" or Tim Burton's "Batman" before it) could appear to some as a major cultural and historical event. In many respects it is. And, as Burr writes:

Although hype played a critical part, this is less about hype than the gentle madness of crowds. The response to "Dark Knight" represents a perfect storm of studio publicity, public mourning, epic seriousness of filmmaking purpose, and the unspoken need for something in this crass tinsel culture to mean something.

What does this movie mean? That's something I want to think about. Obviously, it has struck some kind of nerve. Burr thinks a lot of it has to do with Ledger's death and "the kind of cultural mass wake usually reserved for deceased rock stars: Kurt Cobain, say, or John Lennon." But I don't think those analogies are apt. Shocking and tragic as Ledger's grossly premature death was, he hadn't had the chance to make an impact on popular culture that remotely approached Lennon or Cobain. He was unexpectedly magnificent in "Brokeback Mountain," his first mature work and one of the subtlest iconic performances in movie history. In last year's "I'm Not There" he suggested how much he might grow with his complex and charismatic work as a Godardian Dylan. His lip-smacking Joker is dazzlingly creepy -- you can't get enough of him -- even though I'd argue that his director, Christopher Nolan, doesn't know what to do with him (or even how to cinematically introduce him). I haven't detected an overriding sense of posthumous glorification or hero-worship in the response to him or the movie, though. (If you have, tell me about it.)

In a postscript, Burr wonders why "we" rally around a movie rather than "the things that actually do matter" -- like, say, world peace or climate change or the issues floated (if not meaningfully discussed) in the U.S. presidential campaign. (Those are my characterizations of the issues and the election, not his.)

I wonder. Is it because, getting back to Burr's encounters at the memorial service, it's something we actually can talk about? And not just because it "allows us to agree on something." (David Edelstein and Keith Uhlich can give you some insight on that account.)

Regardless of your opinion of it as art or entertainment, "The Dark Knight" does provide us with ways of talking about issues that matter, even if we don't acknowledge that's what we're talking about. It's (sometimes too literally) about our not-always-healthy desire for hope and heroism (real or manufactured), about media manipulation, terrorism, homeland security, suicide-bomber nihilism (or perverted idealism?)... You name it, it's all in there somewhere. And it feels like it means something, even if/when, upon closer examination, it doesn't. As Edelstein says:

On paper, the morality play is intriguing, but a lot of the dialogue should have stayed on paper (I can imagine a study guide: "The Joker tells Batman he can't fight chaos because he has too many 'rules.' Do those rules ultimately help or hinder Batman in his quest for justice?").

Well, does it? Is that enough? Does the raising of issues in dialog or story beats qualify as artistic ambition or achievement? At the risk of sounding like that study guide: How much does "The Dark Knight" examine moral ambivalence, and how much of it is simply a muddle of fragmentary ideas? (That's not a trick question, or a rhetorical one. I'm really arguing that one in my head.)

You tell me, if you're not sick of talking about this by now: WHY, exactly, do you think "The Dark Knight" the movie of the summer, or the year, or the decade, or the century? Or why don't you?