Fasten your seatbelts, it's gonna be a bumpy Bourne! 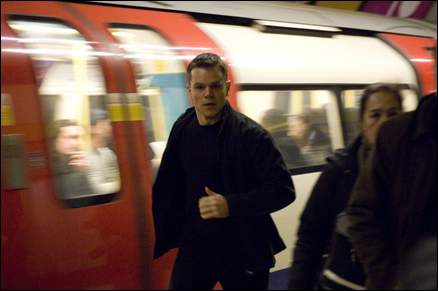 Hippy-hippy shake: Camera and actor on the move in "The Bourne Ultimatum."

The invention in the early 1970s of the camera stabilizer popularly known as the Steadicam (actually a brand name, like Kleenex or TiVo) was a milestone in the technology and aesthetics of film. The freedom and fluidity with which the camera could "float" through a scene was astounding. It was first used in films such as "Bound for Glory" and "Rocky" -- but try to imagine "Halloween" or "The Shining" without it. (On the other hand, the "Shaky-cam" created by Sam Raimi and crew for "The Evil Dead" -- which involved bolting a 16 mm camera to a two-by-four carried by two grips running through the woods -- had a lesser historical impact, but was comparably effective for its purposes.)

Woody Allen and cinematographer Carlo Di Palma used old-fashioned hand-held camerawork for "Husbands and Wives" (1992) -- most noticeably in the opening scene, which became notorious because it made some moviegoers dizzy or nauseous. Theaters posted signs at their box office windows warning people that the movie could induce motion sickness.

Roger Ebert has received a lot of Answer Man mail about all the jittery camerawork in Paul Greengrass's "The Bourne Ultimatum" (see "Shake, rattle, and Bourne!"). And now David Bordwell, in a characteristically well-researched and fun-to-read post on his and Kristin Thompson's blog ("Unsteadicam chronicles"), says: "A spectre is haunting contemporary cinema: the shaky shot."

... Some viewers and critics think the jarring quality of ["The Bourne Ultimatum"] proceeds from rapid editing. The cutting in "Bourne Ultimatum" is indeed very fast; there are about 3200 shots in 105 minutes, yielding an average of about 2 seconds per shot. But there are other fast-cut films that don’t yield the same dizzy effects, such as "Sky Captain and the World of Tomorrow" (1.6 seconds average), "Batman Begins" (1.9 seconds), "Idiocracy" (1.9 seconds), and the "Transporter" movies (less than 2 seconds). [...]

To put this in perspective, check out the Cinemetrics database (to which, of course, Bordwell is a contributor), and you'll find the average shot length of the late Michelangelo Antonioni's "L'Avventura" is 18 seconds, while that whiz-bang "L'Eclisse" has a zippy 11.9-second average. (See Bordwell's article at Cinemetrics here.)

But as Bordwell explains, when it comes to the disorienting effect of some shots, it ain't the meter, it's the motion:

... Directors nowadays tell us that they are in search of energy, a moment-by-moment spiking of audience interest. You can get it through fast cutting, arcing camera movements, sudden frame entrances, the nervousness of the handheld shot, or all of the above. [...]

Essentially, intensified continuity [a traditional Hollywood technique, described by Bordwell here] is about using brief shots to maintain the audience’s interest but also making each shot yield a single point, a bit of information. Got it? On to the next shot. Greengrass’s camera technique makes the shot’s point a little harder to get at first sight. Instead of a glance, he gives us a glimpse.

Although this strategy is more aggressive in this third "Bourne" installment, we can find it as well in "Supremacy." An agent pulls a document out of a carryon bag, and for an instant we can see the government seal. In the next shot the agent bobs in and out of the frame, as if the camera can’t anticipate his next move. [...]

Since the 1980s, in many action pictures the cutting has become so fast, and often capricious, that we can’t clearly see the physical action that’s being executed. That complaint is justified in "Bourne Ultimatum," certainly, but here the style also seeks to make the stunts seem less preposterous. Instead of showing cars crashing and flipping balletically, he barely lets us see the crash. All the conventions of the action film are smudged in Bourne Identity, as if a sketchy rendering made them seem less outlandish. In a Hong Kong film, Bourne in striding flight, grabbing objects to use as weapons without missing a beat, would be presented crisply, executing feats of resourceful grace. But many viewers seem to find this sort of choreography outlandish or cartoony. So when Bourne plucks up pieces of laundry and wraps them around his hands to protect them when he vaults a glass-strewn wall, Greengrass’s shot-snatching conceals the flamboyance of the stunt.

Bordwell cites the "Late Tony Scott Rococo" style (referring to the director of "Top Gun," "True Romance," "Domino," "Déjà vu" and many others) as being one of the more extreme examples of this keep 'em off-balance approach, which he says is also used to cover a multitude of sins, including plot holes.