The framing of the Dark Knight 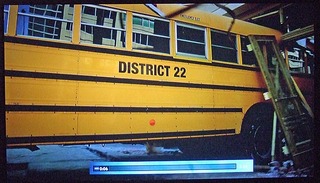 I was working on a detailed response to the entire "What's wrong with this picture" line of inquiry when I realized a very easy answer... it's cropped! I reviewed my Blu-Ray version of the film and was amazed to see that it is very clear that the bus leaves the doorway of a bank, thus explaining the wood and dust. The bank robbery (like many scenes from the film) were shot in the IMAX format and aspect ratio (1.44:1). The 35mm print of the film (and DVD release) cropped those scenes to match the 35mm footage from the rest of the film (2.35:1 aspect ratio). The Blu-Ray release presents the IMAX footage in a 1.78:1 aspect ratio which reveals more of the original IMAX footage. While this may not invalidate your argument, I would argue that the cropped 35mm presentation of the film would lend itself to being more confusing. Having viewed the Blu-Ray version a couple times, I did noticed that the scenes filmed in 35mm (2.35:1) felt better composed than the IMAX shots, as Nolan had to frame them for multiple aspect ratios.

JE: I just checked the Blu-ray version and you're absolutely right. There's more wrong with that picture than I had suspected. I hadn't seen the IMAX or Blu-ray versions -- and my computer doesn't have a Blu-ray drive, but I'd actually bought a Blu-ray disc and just took a look at it. Thank you (and I mean this sincerely) for actually looking at, and paying attention to, the MOVIE itself. This does temper my objections to the shot (since the framing isn't as tight in all versions of the film), but I still think it was a poor idea to start in so close on the bus in the first place. Clearly this is another reason why. Too bad regular DVD viewers are going to be cheated further. To think, some people don't think it matters where the edge of the frame is. It does!

UPDATE: Now, here's another example of what I'm talking about, a video taken on location during the filming of the shot in question. Director Christopher Nolan made a directorial choice -- not, I have argued, a particularly exciting choice, but he chose his shot for the movie. I assumed he started so tightly on the bus because he was trying to fudge an incomplete practical effect (the bus emerging from the bank). The guy who took this footage, from a window on the other side of the street down the block, shows what the scene looked like. If that doesn't matter to you, if it's just "nitpicky" in your view, then fine. Move along. You have an eye for the camera's optimal movement and location or you don't, and that's true of viewers as well as directors. Perhaps something at the scene prevented the camera from moving further to the left? Every time I've seen it (and I've often fallen in love with movies I didn't connect with the first time) I've felt "The Dark Knight" was riddled with off-putting, perplexing choices like this one. It just so happens that two forms of independent evidence (location video and cropping) have popped up to give us a better view of this particular example. But remember: I chose it as one specific example. I am not saying that this shot, and this shot alone, "ruined" the movie, fer cryin' out loud. Together with a hundred more examples, however, I think it shows why the filmmaking is less compelling than it might have been.