The micro and the macro 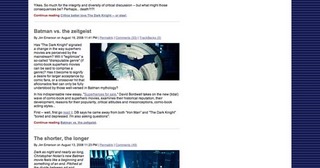 Jonathan Lapper of Cinema Styles, who's also a valued contributor in comments here at scanners, takes me to task for my recent analyses (or over-analyses, if you prefer) of clips from "The Dark Knight" ("Is that any way to review a movie?"). I'll answer that question myself: No, and I wasn't claiming to be writing a review of the movie. But here's what Jonathan wrote:

Ouch. I have to say, if that's what I had pretended to be doing I wouldn't have approved of it, either. But I feel my method and intent have been misinterpreted (largely because I think I botched the approach myself), so I'd like to try, at least, to set the record straight here (as I also did in Jonathan's comments):

(Again: This post is entirely self-serving. If you want to go through this with me once more, please click; if not, please don't.)

1) I did not say that, from this one shot alone, I had reached the conclusion that "TDK" was a "bad movie." I presented it as one of many examples of the directorial decisions I thought made the movie less visually dynamic than it might have been. I had written about different aspects of "The Dark Knight" (including "the story, the characters, the plot's development" -- and the themes, the use of expository dialog and more) when it was originally released, and in the months since. (I made a Dark Knight category for them all.)

Something Keith Uhlich at the House Next Door had said, and that I had quoted last August, stayed with me. He called it "Cuisinarted spectacle," but said he thought that was "intentional to some degree, even though I think it was, ultimately, a failed artistic choice." So, when "TDK" finally became available on DVD in December I took the opportunity to take a look at it from a different angle, to take a good close look at Nolan's artistic choices, at individual images and sequences and the ways they were put together. That approach is not a substitution for, or a repudiation of, a broader look at the film like the ones people had been offering in the months since the movie first appeared.

I used the film's opening shot (see Opening Shots Project, begun in 2006) to examine in detail something I thought worked well in the movie -- and to compare it with its companion/bookend shot (the pull-out at the end of the bank robbery, or "prologue" sequence), to help explain what I felt didn't work well in the latter. I examined how both functioned in the bank robbery sequence -- as set-up and cap-off. And it all had to do with context, with framing, with stylistic choices.

I'd already quoted David Bordwell, who'd zeroed in on it more effectively (and far more concisely) that I:

The fights and chases were as unintelligible as most such sequences are nowadays, and the usual roaming-camera formulas were applied without much variety. Shoot lots of singles, track slowly in on everybody who's speaking, spin a circle around characters now and then, and transition to a new scene with a quick airborne shot of a cityscape...

(BTW, Jonathan has his own criticisms of "TDK," many of which I share, but he does not attempt to make disagreement itself the subject of disagreement, as a friend recently phrased it. To do so is to avoid engaging with what's actually being said, and I believe he was making a genuine effort to engage or I wouldn't have felt, however defensively, to respond in such detail. I'm still trying to get it right myself.)

Jonathan felt it was misleading and counter-productive for me to examine the shot in isolation from the rest of the film. I approached it as a kind of microcosm for the kinds of decisions I thought Nolan made again and again throughout the film (at one point I cited five other examples in a single paragraph) that left me feeling dissatisfied even on a purely kinetic, action-movie level. Other reservations aside, that's what I wanted to focus on here.

... I also set it up as a question of plausibility (What do you have to accept in order to accept what this shot shows?) -- which was a distraction and a HUGE mistake! I should have stayed focused on the one thing, which was far more important. No matter how hard I would try to redefine what I'd intended later, no matter how many times I would talk about the visual integrity of compositions and sequences rather than mere "plot holes," I couldn't undo the first impression I'd made. Almost immediately second-guessing myself, I quickly added to the original post and likely compounded my initial error by bringing up tangential arguments having to do with the concept of the Joker:

... but first perhaps further introduction/explanation is necessary: People have been debating for months about the phenomenally popular "TDK," arguing that it is "incoherent" or "not incoherent" or "more incoherent on second viewing" or "less incoherent on second viewing" or "incoherent but it doesn't matter" or "incoherent on purpose because the Joker is an agent of chaos" or whatever. So, I thought I'd start with a small example of what I find so disappointing about the film (and plausibility is the least of it, though it defies its own rules of plausibility from moment to moment... possibly because the Joker is an agent of chaos and therefore wily and unpredictable, except when he isn't, which is part of the unpredictable part, because he absolutely insists that he is mayhem-y and anarch-ish, but maybe he's not telling the truth about that, either).

What a smart-ass I can be.

2) So, although I completely understand why people would have thought otherwise, I was not using the shot merely to say that the story, or the movie, "doesn't make sense." (Aside: Interesting arguments were made in the comments, though, about how the Joker was all about inexplicable effect and not about cause, about disorientation in the moment rather than logic.) Here's what I wrote:

The point I want to make, and it sounds really simple but shouldn't be taken for granted, is that we are inclined to believe what we see in a movie, and every shot represents innumerable choices about what to include, what to leave out, and what to put where. I think this particular shot is a bit of a cheat, and I felt cheated by it the first time I saw it -- not merely because it suggests so many implausibilities (that's a minor distraction in the moment itself), but because it's an important shot that falls a little flat -- a sustained crane shot that pulls back and doesn't show us what we're meant to "see": the bus exiting the bank. This is just one of countless instances in "The Dark Knight" where the movie fails to show what it tells us we should believe.

In other words, as in the opening shot I'd described, a movie-moment doesn't have to make "sense" on the level of practical or plot logic to be thrillingly convincing. What matters is what appears on the screen, and how it is presented. It should have been as simple as saying: This particular shot of a bus pulling out of the bank into which it has crashed would have been more exciting, to me, if the camera had been placed so that we could actually see the exit more clearly. But I made it needlessly complicated, trying to do too much all at once. (I was right in ways I did not know when I said the shot felt "cramped" to me, though. It was. A reader noticed that it had actually been cropped for DVD and 35mm release. So, even the full scope of the shot the way Nolan composed it can only be seen in the Blu-ray and IMAX versions of the film. I still think it's too tight.) Remember: I'm the guy who likes to take apart jokes to examine what makes them funny. (I draw the line at vivisection, however.)

3) Jonathan says he took away nothing from my posts other than an illustration that "the critic publishing the piece knows how to pick a scene out of a film to suit his or her purpose. That way lies sophistry." He uses some examples from "Citizen Kane" and "Casablanca," Edward Hopper and Vincent Van Gogh, to illustrate. I counter-argued in his comments section that I don't think the comparisons to what I did are valid, though obviously I can't argue that things can be taken out of context and used for selfish purposes. (We did just suffer through an endless presidential campaign, didn't we?)

I'll say this about the whole "TDK" experiment: I stand by my intentions and the critical instincts behind my approach. But I can point to examples in my own writing where I fumbled the execution, even though the concept behind it may have been sound. Just as I accuse "TDK" of doing.