NOTE: Reader Cameron Smith has noticed that this shot has been cropped for the DVD version of the film. See his explanation here.

"Dark Knight Quiz #1: What's wrong with this picture?") asked you to consider all the elements a single shot -- the culmination of the film's bank-robbery opening sequence -- and explained what you saw in it, what information it was conveying (and how), and what it implied about the Joker's planning of the bank robbery itself.

This last point is essential because the sequence itself continually asks us to figure out the plan. That's the fun of watching the robbery unfold: This isn't the kind of classic heist movie like "Rififi" or "Le Cercle Rouge" where we're in on the meticulous preparation with the robbers and where the suspense and satisfaction comes from knowing what's supposed to happen when, and how they improvise when it doesn't.

As "The Dark Knight" begins, we sense there's a crime being committed, but we don't even know what it is at first. The fun (and I know there will be those who say you can't examine how fun is created, but we'll hope those people aren't wasting their time reading a film criticism blog) comes in putting the pieces together as the crooks go through their paces. The Joker (we suspect, but only learn in retrospect) is introduced from behind, standing on a streetcorner where he is picked up by two other chatty masked henchmen.

There's the question of the silent alarm that, mysteriously, "goes to a private number" instead of 911; the 5,000-volt-protected vault; the armed bank manager who laments the lack of honor and respect in the modern criminal element; the systematically diminishing number of masked participants (and beneficiaries) in the robbery itself; the use of the grenades used to control the staff and customers; the arrival and departure of a bus...

UPDATE: In the Blu-ray extras, director Nolan speaks of this entire sequence, all shot in IMAX, as "The Prologue," and said he considered it vitally important to setting up the scale of the whole movie -- hence the importance of the opening helicopter shot, the swooping down onto the roof of the bank, the crash of the schoolbus through glass double doors (built inside the building itself)... and, of course, this shot that crowns the segment.

So, during this sequence, we discover (through the process of elimination) which of these fellas is the Joker, and we are led to believe that the target of his heist is a "mob bank" -- where, evidently, organized criminals store vast sums of money in cash (some of which, we later learn, is being radioactively marked and traced by law enforcement).

That's not even the beginning of the movie's deliberately contorted plot, but it's what we're meant to take away from this opening sequence. The final shot (below) begins as the getaway bus pulls away from the bank. It starts tight on the side of the bus, a few boards fall away (debris from the wall of the bank) and quite a bit of dust is raised. As the camera cranes back, the Joker's bus pulls around the corner and into a line of schoolbusses that have just made the light at the intersection. We hear the sound of sirens, and see police cars arriving at the scene, coming from the opposite direction. We hear children's voices -- suggesting (to me, at least) that the schoolbusses are actually hired by the district and carrying children, although they appear empty. I rather like the interspersed yellow taxis in the left lane balancing the busses on the right -- just the sort of visual grace note lacking in so much of the rest of the picture.

My thanks to commenters who've pointed out numerous improbabilities or inconsistencies in the shot, and the assumptions behind it. For example: The timing of the busses' arrival on the scene is a little cute. Some have suggested that, at least if the Joker's bus joined the end of the line, instead of inserting itself into the middle, all that dust would have been less distracting to the real bus drivers. (On the other hand, the filmmakers could simply have chosen not to use so much dust! After all, the bus crashed through the glass doors of the bank and there was little dust, and mostly glass, going in; if they hadn't put so much plywood and powder in the exit shot, people like me wouldn't have had the opportunity to be distracted by it.) But, relatively speaking, that's no big deal.

The point I want to make, and it sounds really simple but shouldn't be taken for granted, is that we are inclined to believe what we see in a movie, and every shot represents innumerable choices about what to include, what to leave out, and what to put where. I think this particular shot is a bit of a cheat, and I felt cheated by it the first time I saw it -- not merely because it suggests so many implausibilities (that's a minor distraction in the moment itself), but because it's an important shot that falls a little flat -- a sustained crane shot that pulls back and doesn't show us what we're meant to "see": the bus exiting the bank. This is just one of countless instances in "The Dark Knight" where the movie fails to show what it tells us we should believe. I wanted to shout at Christopher Nolan: Don't explain it in dialog later, don't skimp by shooting or cutting around the main action, just put it on the screen!

That doesn't much bother some fans, obviously, but I think it's the main reason the movie feels slipshod to me. Not that every picture has to meet the standards of Hitchcock or Buster Keaton, but "The Dark Knight" shows so little regard for the integrity of the shot or the sequence. This is just one specific example of what Stephanie Zacharek, was saying, and why I quoted her earlier: "I find Nolan's images (even the ostensibly dazzling ones) disconnected from one another and from any meaningful, overarching whole. I'm baffled that a filmmaker who claims to love Hitchcock would be so clueless about visual storytelling: Nolan relies on a lot of expository dialogue to explain what's going on, which I guess is a good thing, because I wouldn't want to have to figure out what this thing is about based solely on the visuals or the editing."

In her original review, Zackarek went into further detail:

[The movie]... gives us enough multilayered subplots to at least fool us into thinking this is a work of intellectual and moral complexity. But as a piece of visual storytelling, from shot to shot, "The Dark Knight" is a mess. Characters disappear from one locale and show up inexplicably in another, thanks to the magic of editing. At one point, we learn two characters have been abducted, but Nolan doesn't bother to show us who did it or how. (Later, he explains the "who did it" with dialogue -- the lazy way.) At the end, a major character is left hanging, literally, as we are figuratively. If this is genius, give me hackery.

Some of the movie's critics have said that they found the movie's photorealistic style at odds with its fantasy elements, that it's much easier to suspend disbelief in, say, the laws of physics in a world that looks like Anton Furst's stylized Gotham for Tim Burton than in a city that looks exactly like Chicago, because it is. 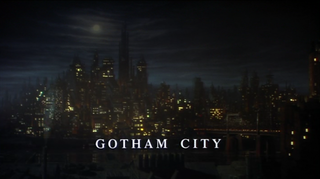 I think there's a good deal of truth to that. But it didn't have to be the case. Let's back up a little, to the opening shot. "The Dark Knight" begins, rather disconcertingly, not in the dark but in bright daylight. (I see a hint of "Psycho" in the first image.) It's a standard establishing shot, an aerial glide across a very real cityscape (Chicago, as Gotham). It's not flashy, but it's cool the way the camera closes in on the wall of mirror-windows (no helicopter reflection, either!). And then we get the pay-off, the party-popper explosion that starts the movie off with a tiny bang. We expect the bangs will get bigger.

Of course it's preposterous: It's midday, there's downtown traffic on the streets below, and if you were trying to rob a bank unnoticed... well, you'd pretty much be calling attention to yourself. But there it is: We see it all happen in a single shot. No fudging. We accept it because there it is.

Not so with the bookend shot that caps the sequence, which is why I found it a bit of a let-down from the first time I saw it. What's missing? We could come up with any number of ways it could have been shot (and those are the decisions directors get paid to make). But what it lacks, I think, is a sense of cohesiveness and spectacle that, as I said, might have been improved if it had actually shown us the bus exiting the wall of the bank. As it is, it's a small trick -- not the kind of thing you expect a big action picture to skimp on. For a long exterior crane shot, the composition actually feels cramped. I wanted to see what's around that corner to the right -- to see what the Joker was leaving behind.

Yes, that's a matter of opinion, but I hope by "quoting" the shot that I've shown you what my opinion is based upon. I could have done the same thing with any number of events and sequences: the final shot of Rachel and Batman landing on top of the cab (another cheat from a clumsy angle, too close to the previous shot, to disguise a short drop); or the handling of the death of Commissioner Loeb (who hasn't even been properly introduced in the movie yet, though the other two Joker card fingerprint DNA sources have); the assassination attempt at Loeb's funeral; the set-up for the "Lower Fifth" truck chase; the timing and staging of the Two-Face burn sequence, beginning with Harvey Dent rubbing his mug in guzzline in a 90-degree tilt shot... A few well-chosen shots, placed coherently, and my objections might all but evaporate. My suspension of disbelief would be... suspended again. That's what good movies are able to do, and to sustain. It's a high-wire act, and for me "The Dark Knight" keeps tripping up again and again.

Please notice that, although I object to the argument that anything and everything can be attributed to the omniscient Joker because he's a supernatural agent of chaos and therefore can just do whatever he likes, none of the reservations I've mentioned here have anything to do with the character and what he can or cannot do when he's off-screen. They are fundamental filmmaking choices: putting the camera here rather than there, cutting this shot together with that one, putting something into the frame (or the script) or leaving it out.

I wish I could go over every shot in the movie with you (yes, you -- but not you over there, because you'd hate it and think it's a waste of time), to discuss what it's doing from image to image, because that's the kind of analysis I really enjoy. (Not the first time I see the movie -- later, to better understand why I felt what I felt when I was watching it before!) I still may choose an excerpt from one of these sequences to illustrate what I mean. Not that it matters, but "The Dark Knight" is still a new release; it just came out on disc about a month ago...

NOTE: Reader Cameron Smith has noticed that this shot has been cropped for the DVD version of the film. See his explanation here.