The shorter, the longer 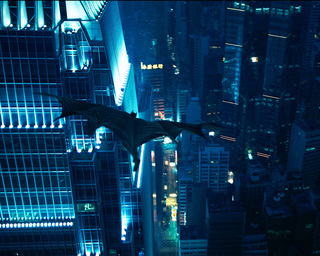 Dark as night and nearly as long, Christopher Nolan's new Batman movie feels like a beginning and something of an end. Pitched at the divide between art and industry, poetry and entertainment, it goes darker and deeper than any Hollywood movie of its comic-book kind... -- Manohla Dargis, New York Times

If [Director Christopher Nolan] occasionally stumbles upon an indelible image (aside from... a scene where the two-wheeled Batpod does a wall-assisted 180-degree turnaround gave me giddy shivers) it's quickly subsumed by his more frequent tendency toward Cusinarted spectacle. The human drama in "Batman Begins" held my attentions, so I wasn't so much bothered by the fact that its action scenes were murky, bordering on incoherent (this seemed intentional to some degree, even though I think it was, ultimately, a failed artistic choice). -- Keith Uhlich, The House Next Door

Nolan's direction is so relentless that the climaxes never feel climactic. At the same time, I realize that relentlessness has been the formula for blockbusters since "Star Wars," or at least "Raiders of the Lost Ark," and these blockbusters keep speeding up. They've probably just sped past me. In other words, relentlessness won't be a problem for 99.9 percent of the audience. It is, in fact, what they came for. -- Erik Lundegaard, MSN.com

If "The Dark Knight" felt too long to you, or even if it didn't, is it possible that it might have felt shorter if it were longer?

The quotations above are from critical assessments of "The Dark Knight" that, respectively, are mostly positive, negative, and positive. They all touch on what I feel is the most notable cinematic aspect of the movie -- not that it's too long, but that too many shots and sequences felt rushed or truncated. They didn't stick around long enough to fully register. I wanted them to linger longer (like that?), so I could take 'em in and soak up the atmosphere. Like the image of the Joker with his head out the window of the car: I wanted to savor it, to feel the full force of its beauty and horror and creepiness. The recycled still image above may be the best shot in "The Dark Knight," because it holds still long enough for you to really look at it.

Likewise, many scenes end abruptly just when it feels they should just be reaching their climax. (Some have mentioned their frustration with the encounter with the Joker in Bruce Wayne's penthouse, which just seems to end before it's over.) The movie whizzes by, all right, but its sense of pacing is erratic, like a hesitant driver who can't decide whether to hit the brakes or the accelerator at any given intersection. As someone unfamiliar with the characters and story in advance, I just had to give up and see what I could follow. (Spoiler: I've had a discussion with several friends about the Rachel / Harvey Dent kidnapping scene: Did the Joker lie to Batman, or did Batman say he was going to rescue one and then change his mind, or is it supposed to be ambiguous? Opinions vary, but one person who saw the film a second time said he wasn't sure after a single viewing, but now believes it was the first option, a simple Joker trick. I'd prefer to think it wasn't resolved either way, but maybe it is.)

Robert "Iron Man" Downey, Jr., had this to say about "The Dark Knight," in an interview with Moviehole:

It's like a Ferrari engine of storytelling and scriptwriting and I'm like, "That's not my idea of what I want to see in a movie." I loved "The Prestige" but didn't understand "The Dark Knight." Didn't get it, still can't tell you what happened in the movie, what happened to the character, and in the end they need him to be a bad guy. I'm like, "I get it. This is so highbrow and so f--king smart, I clearly need a college education to understand this movie." You know what? F-ck DC comics. That's all I have to say and that's where I'm really coming from. [...]

You know, you're never too old to burn your bridges because I believe I have offended everyone. [laughs] I think I've got a couple more. "I'll burn that bridge when I come to it," is my favourite phrase I've ever coined.

You know, he didn't coin that phrase, and I'm not sure how serious he is about "The Dark Knight," either, or if he's just trying to whip up a little Marvel vs. DC, World Superhero Wrestling competition. Downey's obviously a smart guy, and you don't need much of an education in order to understand the hero/villain, Two-Face, "You complete me" stuff at the end of "The Dark Knight," because it's so right there, (over-)explained again and again.

But I think he's on the mark with his observation about the "Ferrari" storytelling, the sleek styling that zips by so quickly that I sometimes felt cheated because I didn't get a good look at it as it flashed by. (Imagine taking the Universal Studios Tour at 95 mph -- you'd give yourself whiplash as you sped past the Bates Motel.) So, what's the rush?

The old studio moguls followed a wise maxim: Put the money on the screen. And not just for a second at a time. There are some marvelous images in "The Dark Knight" -- and there must have been a lot of them -- so why not hold onto them, show them off? (I'd love to know the Average Shot Length for this one.) Or is this perhaps a strategy to leave the audience wanting more, to encourage a repeatable experience not because viewers want to re-enter and luxuriate in the movie's swank but gloomy urban world, but because they want to try to grab and hold onto a movie that is designed to evade their grasp and slip through their fingers? (I don't remember feeling this way about "Batman Begins.")

I didn't think "The Dark Knight" was necessarily too long, but I think I would have liked it more if it had slowed down, refined its story points (without so much summarizing in dialog), and just let the movie breathe. But then, that's my complaint about half the movies I've seen since the turn of the century: too much distraction without impact; all whiz, no bang. What are these movies running away from? The fidgety R.E.M. editing doesn't make them move any faster, it just gives them the jitters. (My favorite moments in "The Dark Knight" are the views of Gotham; not to take anything away from Heath Ledger, but Chicago is the real star of this movie -- when it backs off enough to let you take in the vistas.)

Yes, we're used to processing information a lot faster than we were 20, 50, 70 years ago, and you can see it reflected in motion pictures. Shots flash by more quickly now, and that's become the industry standard. (See the HBO documentary "Resolved," about the current style of high school debating, which relies on delivery of large quantities of information at a pace so rapid it requires breathing exercises, and which is incomprehensible to anyone but judges and other debaters. Good metaphor for some movies.) After a while, too many BPMs don't raise your heartbeat. They just become lulling and tedious.