The evolution of a hat 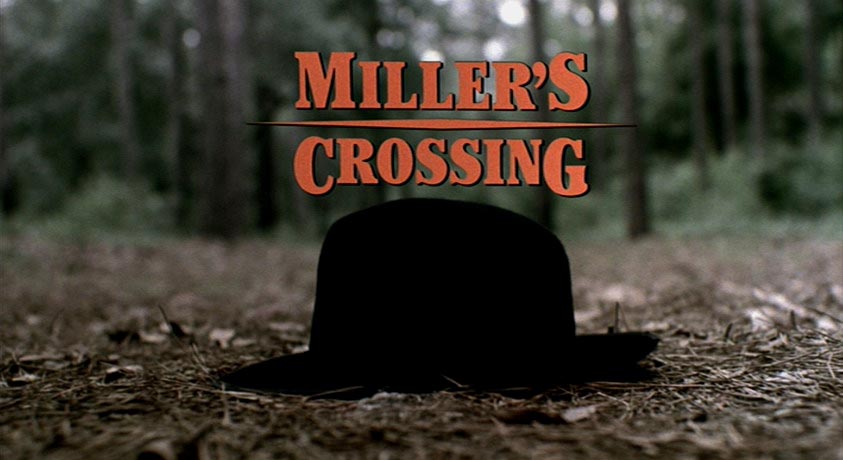 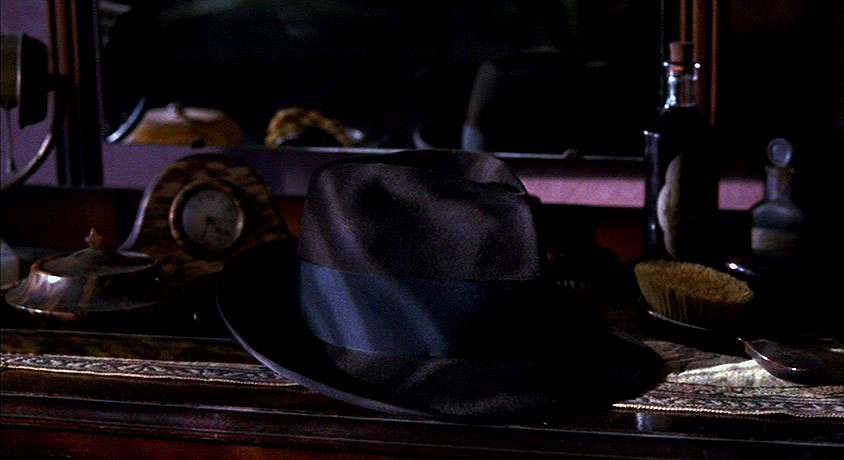 (My final contribution to the Close-Up Blog-a-thon at the House Next Door, which just wrapped.)

Warning: This post (and the short film montage/hommage I put together to accompany it, above) may contain spoilers.

Take a look at the four shots from Joel and Ethan Coen's "Miller's Crossing" on this page: three close-ups of the same hat and a long shot of another one with a body under. The hat in all three close-ups, hat belongs to Tom Reagan (Gabriel Byrne). The other one is on the head of his boss and friend, Leo O'Bannon (Albert Finney). But let's re-wind a little bit.

The movie is set into motion with a close-up of three ice cubes plopped into a glass tumbler. We don't see Tom, our main character until the next shot, where he appears behind the bald head of a man (Johnny Casper, played by Jon Polito) who's delivering a lecture into the camera -- or just past it -- about friendship, character, ethics. Tom is the one who put the cubes into the glass and poured himself some whiskey. He crosses the room out of focus, moves past the camera, and when we see a reverse angle, he's standing behind and to the side of Leo. His tumbler of whiskey is in the frame, but his head isn't. When we finally do get a look at his mug, he's not wearing a hat. Meanwhile, Casper's henchman, the cadaverous Eddie Dane (J.E. Freeman) stands behind his boss, holding his hat. And wearing one. It's a sign of respect. 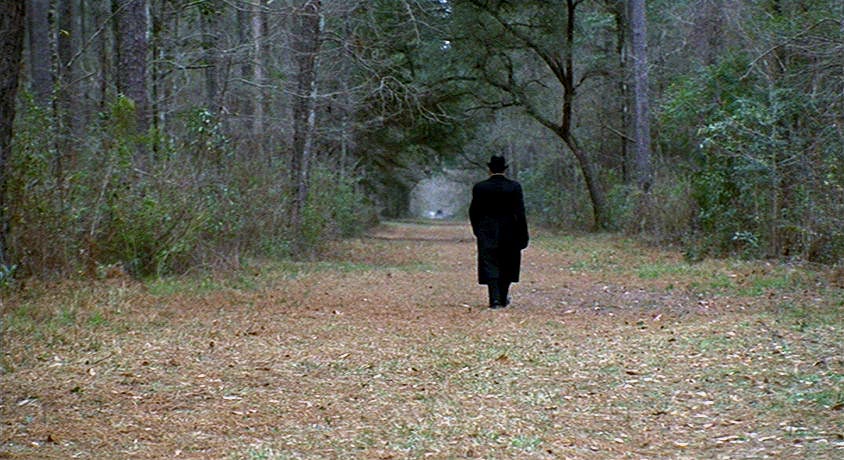 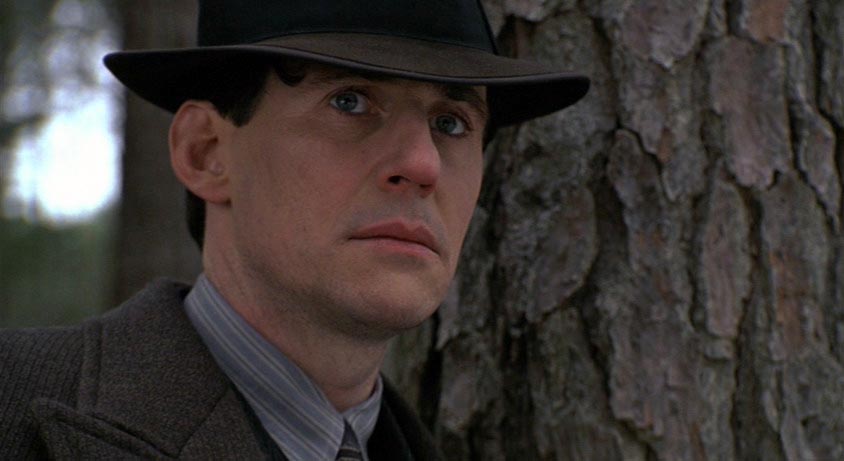 When Tom leaves the room at the end of the scene, he puts on his hat. Then there's this strange credits sequence, like a dream in a forest, with a canopy of autumnal branches overhead. On the forest floor, a hat falls into the foreground of the frame, the title of the film appears (Figure #1), and the hat blows away into the distance. In the next close-up, Tom is roused from a stuporous slumber. He sits up and feels his head, for his hangover and for his hat.

"You bet it, ya moron," says the friend who woke him up. "Good thing the game broke up before you bet your shorts."

Turns out, the hat left with Mink and Verna. Together, they are the link between Tom's hat and his shorts. We've already heard, in the opening scene, that Mink (Steve Buscemi) is "the Dane's boy." Mink appears only in one brief scene at the Shenandoah Club, explains the whole movie ("as plain as the nose on your -- Turns out he's also involved with "the Schmatte," bookie Bernie Birnbaum (John Turturro), who also happens to be the brother of Verna (Marcia Gay Harden), Leo's twist and Tom's secret squeeze and the subject of Johnny Casper's opening rant.

Got that, or do I have to spell it out for ya?

Tom wants his hat. He goes to get it from Verna. Moon-lit close-up of the hat on the bureau. (Figure #2). Tom, is reflected, out of focus, in the mirror behind it. He's sitting in bed, smoking, just staring at the hat. There's a knock at the door. Tom answers. A man in a fedora stands silhouetted in the doorway. It's Leo, looking for Verna. He sits, hat in hand, pouring out his worries to Tom. When Leo leaves, Tom goes back into the bedroom and there's a figure under the sheets. Verna.

Later, Verna and Tom have a bedroom conversation at dawn about a dream Tom had:

VERNA And you chased it, right? You ran and ran and finally you caught up to it and picked it up but it wasn't a hat anymore. It had changed into something else--something wonderful.

TOM No. It stayed a hat. And no I didn't chase it. I watched it blow away.... Nothing more foolish than a man chasing his hat. 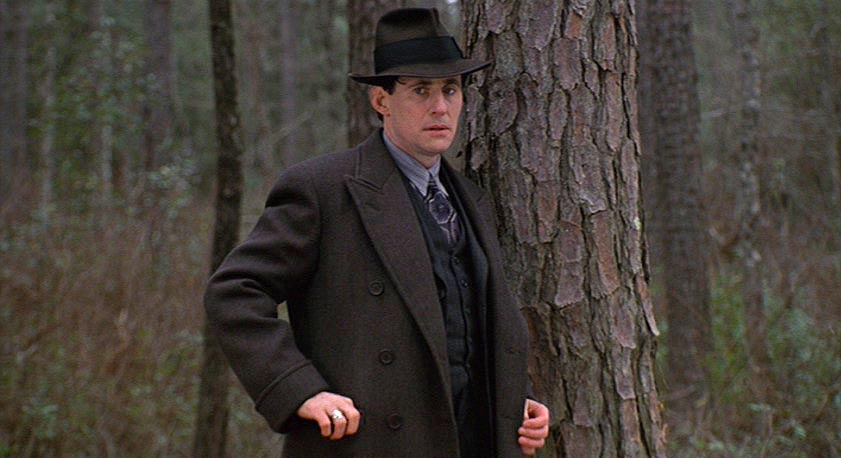 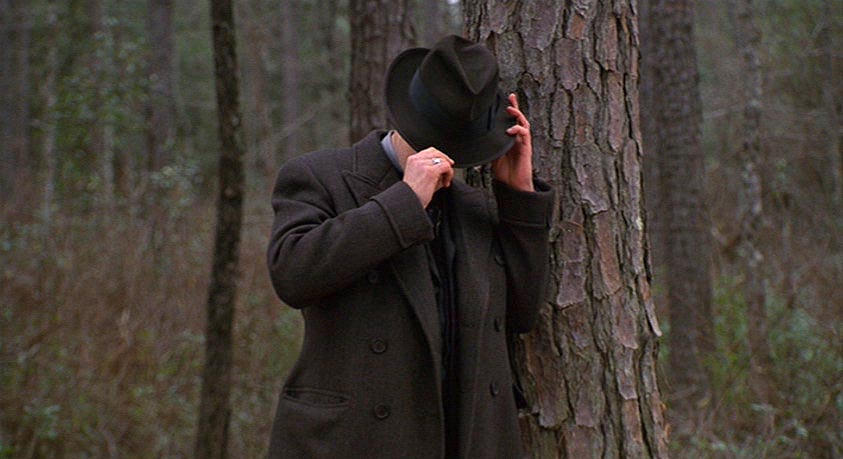 Which brings us to the end of the picture. A lot of stuff happens, and you're just gonna have to figure it out for yourself about who does what and why they do it, but as Tom says, "Do you always know why you do things, Leo?" 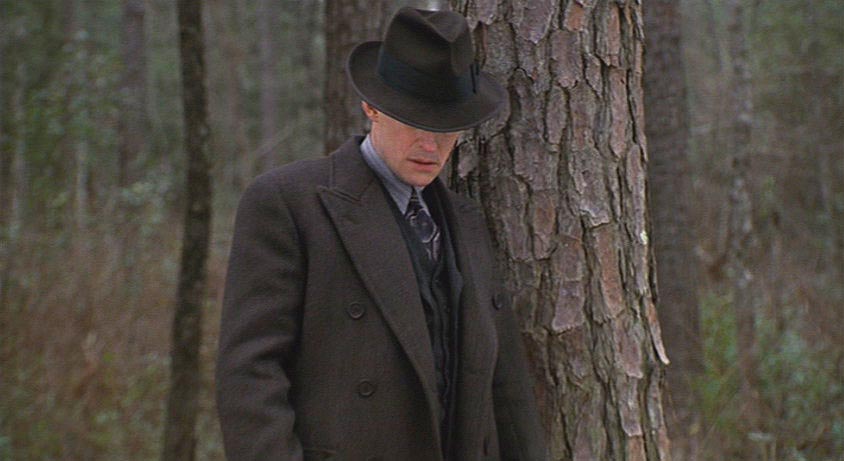 Leo says he's got it all figured out now, in retrospect; that Tom made a "smart move"; that he wants things to be like they were between them: "As for you and Verna -- well, I understand, you're both young and, well, dammit, Tom, I forgive you."

Tom bristles. He blows off Leo. Tells him goodbye. And watches him walk away. Leo puts on his hat. (Figure #3.) Tom puts on his, and tilts it down over his eyes. The camera moves in for a close-up, peering under the brim. Tom looks up to watch Leo go (Figure #4). He doesn't make a move. Know it or not, this is where Tom has been heading all along. The moment has the inevitability of a dream.