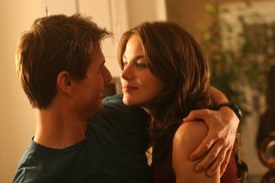 Tom Cruise with his "Miiii" squeeze.

What do we talk about when we talk about Tom Cruise? What are our images of him really based upon, besides his own publicity stunts and some headlines? And just how did the top movie star in the world become so unlikeable in the public eye, an object of scorn and derision in the media, and a punch line for stand-up comics? Normally, a movie star's fall from gross -- er, grace -- wouldn't interest me much (although I am still trying to figure out how Burt Reynolds' 1970s career flamed out). I've interviewed hundreds of actors and filmmakers over the years and I've always made it a personal policy never to ask them, or speculate in print, about what they euphemistically call their "private lives," mainly because I really don't think it's any of my (or your) business. I'm interested in their work, not in what they do in their off hours.

But the fascinating thing about Cruise is how he's made a public commodity of his so-called "private life" (or his own image-manipulation version of it, presented for your entertainment). You'd think he would have learned something from the tabloid headlines generated by the sudden and mysterious split with his superstar wife Nicole Kidman, and tried to keep his personal affairs as private as he can. But no. When somebody boasts about details of his alleged off-screen love life on the most popular talk show in the world, goes on TV to say a pregnant actress (Brooke Shields) was wrong to seek medical treatment for her postpartum depression, and acts as a public spokesperson for his supposed "religion" in interviews (if you grant Scientology that status) -- even to the point of having Scientology tents set up on the set of Steven Spielberg's "War of the Worlds" in case cast or crew wanted to take a Free Personality Inventory -- well, that's when the "personal" becomes part of the star's public branding. And Tom Cruise is a brand name, every bit as much as Apple or Starbuck's or Subway or Volkswagon.

In Cruise's case, however, the spin he spun (after he fired his ultra-protective longtime PMK publicity handler Pat Kingsley) seems to have gone spinning out of his control. So now what we're seeing is... backspin! But these things are always cyclical. Once everybody's done tearing him down, they'll start building him back up again, so they can tear him down again...

Phillip Kelly (NOT a suspected terrorist and no relation to "Donnie Darko" director Richard Kelly, as far as I know) writes:

They say Cruise’s percentage poll for women has gone down from 2005 to now due to his erratic behavior. I finally sat down and watched some of those clips that people have been talking about that I missed the first time around; i.e. Oprah, Matt Lauer, etc., etc.

First, I didn’t see any of the women in Oprah’s audience mind that he seemed so in love with Katie Holmes and that he would jump around a bit because of it (staged – I don’t know about that, maybe?), and with Mr. Lauer, while I may not agree with everything he said, I agree with some of it, and he was well spoken; it seemed like an intelligent debate; both sides taking the time to understand the other. I don’t think these things alone are what did it. I think however that the press putting such a negative slant towards all of this does.

Or hyping things that are completely unknown to be fact (Cruise pulling a "South Park" episode? Fun to talk about, but fact?) People will believe anything they read or hear about second hand. I was told that the interview with David Letterman was an uncomfortable one. That it all fell apart. I watched it and didn’t even the slightest bit uncomfortable, and I was told from someone who didn’t see it that it was. This is the way it works. It’s easy to blame Cruise for all of this, but what a juicy opportunity for gossip mongers, and the press to jump on the band wagon and blow a lot of it out of proportion, and in your case to have a little fun. Is that wrong? For the press perhaps, but for a blog to speculate, probably not.

Another thought would be that perhaps they should show what the rating approval for Cruise was before “War of the Worlds" in comparison to the poll in 2005. What an easy comparison to make, then to now. It could be that women’s interest in him has been dropping, not because of his behavior, but because of the movies he’s made, and a string of them; “Magnolia," “Eyes Wide Shut," “The Last Samurai," “Vanilla Sky," “Minority Report," “Collateral," “MI:2" (which sucked)… do any of these movies capitalize on his female audience? “Jerry Maguire" was really the last one that did, and was that almost 10 years ago now??? Perhaps, and god forbid we apply some logic to all this, and say his numbers have been slumping for awhile, and people have been looking for an excuse to move onto the next big star for awhile. But maybe that’s just as speculative as everything else.

But like all audiences, or crowd, or mobs, they are fickle, and I believe they’ll come back again. I happened to enjoy "MI:3," so I haven’t completely left.

You bring up some intriguing points. Let me respond to some of 'em:

1) I think the Oprah couch-jumping (some might say shark-jumping) incident probably played better in the studio than on TV, especially when it was repeated and repeated and repeated so much that it was parodied in "Scary Movie 4." (You could say the same thing about Howard Dean's infamous rally-the-troops scream; it looked weird on TV, but it was different in the room with the crowd and the noise, etc.)

2) Going on Oprah in the first place -- and shouting his love for Katie Holmes to the mountaintops -- was definitely designed as an appeal to his female fan-base, while (as you quite correctly observe) his movies of the last several years -- or, at least, his roles in them -- have been more male-oriented (and, in the case of "Magnolia" -- and maybe even "Eyes Wide Shut" -- satirically misogynistic). But going on the Today Show to tell a (not present) woman she should have treated her postpartum depression with vitamins is not the way to court female fans.

3) Cruise and/or Scientology have never denied the news and blog reports about Cruise/Scientology pressuring Viacom to pull the Cruise/Scientology-ridiculing "Trapped in the Closet" episode of "South Park" from airing at all in the UK, or from being repeated as scheduled on Comedy Central in the US (Direct links to those reports can be found in my earlier Scanners postings here and here.) The interesting thing about the "anonymous spokesperson" denials, as I noted in March, was that they centered not on whether Cruise or Scientology had pressured Viacom to withhold the episode, but whether Cruise himself had threatened to not promote "Miiii" (though Viacom and Paramount may now wish he hadn't):

A spokesman for Cruise denied that Cruise had ever made such a threat. "He never said any such thing about 'Mission: Impossible 3,'" the spokesman said.

As I said at the time, that's what we used to call, in the Nixon era, a "non-denial denial."
Advertisement

Of course, Cruise has done tons of interviews since March. All he'd need to have said, just once, was: "I didn't pressure them to pull that episode. I wish they'd just go ahead and put it on -- in the UK and the US." That would be the end of it. The question is whether the Comedy Channel in Great Britain or Comedy Central in the States would actually go ahead and show it. If not, what's preventing them? the ratings would be HUGE. As I also reported, the company that licensed the rights to show Viacom/MTV Networks stuff in Canada -- but is not itself owned by Viacom -- moved up the date for airing "Trapped in the Closet" precisely because of all the controversy surrounding it. (Meanwhile, we know why the "Bloody Mary" episode is not being re-run; Comedy Central openly announced it had caved to pressure from the Catholic League. They've never given any "official" reason for pulling "Trapped in the Closet.")

4) I think Cruise has simply reached the media-saturation point. He's overexposed, he's a worn-out joke, he's like Michael Jackson with money, or Paris Hilton with an actual career. He probably just needs to go away for a while -- and stop promoting his wife and his baby and his religion. I think his role in "Collateral" shows the direction he should pursue. (He should study Bruce Willis's career.) I don't know if his decisions in the last year have done permanent damage to his image and his bankability. Chances are, if he learns to act his age (on-screen and off-) he could resurrect his reputation in a couple years. He just needs to do some good (and less predictable) work in some good movies, that's all -- whether they're hits or not. The "image" is secondary to the work. Or ought to be.