Why we are all doomed 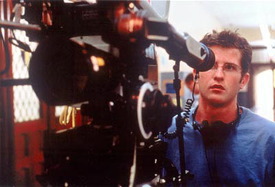 Not to be confused with suspected terrorist James Kelly. Or soap-operatic rapper (and little girl fancier) R. Kelly. Or "Singin' in the Rain" (1952) dancer Gene Kelly. Or former Princess of Monaco Grace Kelly.

One of the things I love about "24" (not just this season, which is the best one ever, but in general) is the way it shows how people never cease being petty and self-centered, even in the midst of potentially catastrophic international crises in which millions of other people's lives are at stake. What it all comes down to is this: In any crisis, office politics are probably more important than global politics. We see it all the time with our politicians' egocentric defenses of indefensible ineptitude and gridlock caused by inter-agency squabbling (which the papers always call "turf wars").

Now, here's another example of bureaucratic bungling in the name of Homeland Security that shows why, as Jon Stewart recently observed, if terrorists have not yet attacked us since 9/11 it can only be because they are even more incompetent than our own so-called "security" apparatus: Director Richard Kelly ("Donnie Darko," "Southland Tales") is being investigated as a possible terrorist and may not be able to attend the premiere of his new movie at the Cannes Film Festival next week, where his film is in competition for the Palm d'Or. Why?

Here's a report from The Guardian:

Kelly, 31, appears caught in bureaucratic limbo after his passport was reportedly "held under review" by the US government. Sources suggest that the film-maker has been confused with another man, "James Kelly," who is on the terrorist watch list. Kelly's full name is James Richard Kelly.

[Kelly was] born in Virginia, the son of a NASA technician... His latest picture, "Southland Tales," is set in a dystopian Los Angeles paralysed by economic and environmental collapse. Ironically, the film is implicitly concerned with security measures taken by the US government after the events of September 11, 2001.

"The paranoid conspiracy freak inside me is starting to think this has something to do with the film," Kelly admitted yesterday. In the meantime he has enlisted his mother to hunt for documents that prove his American citizenship.

Can this be? Can they really not differentiate between names as commonplace as "James Kelly" and "James Richard Kelley"? Are there no other distinguishing pieces of information that might help tell the difference between one person and another -- like, I don't know, birthdate, birthplace, physical characteristics, driver's license, IMDb filmography...? Then again, perhaps Homeland Security should just ship him off to Guantanamo and interrogate him for a few years -- just until they can get this straightened out. We'll all feel so much safer.

At least he's not being confused with R. Kelly. Then he might be trapped in a closet somewhere and we'd never find him.

P.S. Please read my more-or-less definitive (if I do say so myself), against-the-grain appreciation/interpretation of "Donnie Darko" here. This reading of the movie seems to get more solid every day. Honest.