I regret that I haven't seen Guillermo Del Toro's "Hellboy" (2004) or "Hellboy II: The Golden Army" (2008), though Del Toro's "Pan's Labyrinth" was my top movie of 2006. Andrew Tracy at Reverse Shot evidently isn't impressed with the Hellboys, and I say "evidently" because I'm putting off reading the whole of his review of the new one until I've seen it. 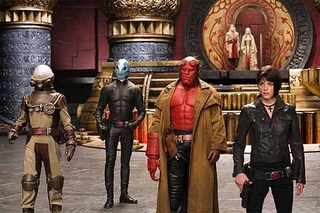 But that hasn't stopped me from relishing the first two paragraphs! Because Tracy is articulating thoughts I've often entertained but too rarely raised in public. He begins:

Talking faux-seriously about juvenilia has become a marvelous way to avoid talking seriously about the serious. The slew of hyperbolic, overheated critical rhetoric that follows in the wake -- hell, in advance of -- the latest high concept blockbuster is enough to make one gag. In these cases, critical investigation has by and large become a matter of repeating verbatim the films' stridently announced surface-level themes with some linguistic curlicues and intellectual tumbling tossed in.

As it has so often, commercial calculation finds a willing handmaiden in critical laziness, even (or perhaps especially) that evinced by those more intelligent and discerning writers who devote their efforts and talents towards designing elaborate intellectual justifications for films that neither require nor deserve them.

Woo-hoo! There's some provocative material for debate there. Of course, I see various shades to this argument, and I'm pulled in one direction and then another, but I'm sure we've all read pseudo-(anti?)intellectual criticism of the type Tracy describes. Craft is always worth talking about as far as l'm concerned (if only to point out the emptiness of a particular exercise), as is a how a movie fits into or challenges contemporary pop culture, politics, etc. Those can be worthwhile subjects, and as I like to say, movies aren't made in a vacuum. They always have something to do with the times in which they're made. (I like Sean Axmaker's current e-mail signature, attributed to Arnaud Desplechin: "You can't stop a film from meaning things.")

In the New York Times, A.O. Scott seems to be touching on something close to what Tracy is getting at. Writing about the summer glut of superhero movies, he says:

These movies wear their allegorical hearts on their cartoon sleeves, dressing up their stories with intimations of topicality overt, like the Afghan kidnappers in "Iron Man," and indirect, like the ruminations on due process and torture in "The Dark Knight." [...]

I don't want to start any fights with devout fans or besotted critics. I'm willing to grant that "The Dark Knight" is as good as a movie of its kind can be. But that may be damning with faint praise. [...]

And yet stating such themes is as far as the current wave of superhero movies seems able or willing to go. The westerns of the 1940s and '50s, obsessed with similar themes, were somehow able, at their best, as in John Ford's "The Searchers" and Howard Hawks's "Rio Bravo," to find ambiguities and tensions buried in their own rigid paradigms.

But the cowboys of old did not labor under the same burdens as their masked and caped descendants. Those poor, misunderstood crusaders must turn big profits on a global scale and satisfy an audience hungry for the thrill of novelty and the comforts of the familiar. Is it just me, or is the strain starting to show?

Advertisement
So, are some movies just inherently too dumb (or shallow or generic) to justify criticism? I don't think that's what Tracy and Scott are saying. But I think I do understand the impulse behind some of these sentiments. That's one big reason I was happy to give up daily newspaper reviewing back in the Los Angeles of the early 1990s. As I put it then: I was seeing too many movies that were bad (and shallow and generic) in exactly the same ways, week after week. These formula-fitting products just didn't interest me, and I was weary of trying to find new ways of writing about them that didn't bore me (and readers) to death. (Theoretically, of course, there is nothing to prevent a superhero movie from being used to flesh out any theme or metaphor like any other, including genre pictures like horror movies or westerns or detective thrillers. "Nosferatu" or "Psycho" (1960) or "The Searchers" or "Chinatown," anyone? But how many of them even try to expand beyond the constricts of their genre?)

Let me continue with Andrew Tracy's next paragraph:

What's most obscene about this pop-cultural mythmaking is that it works so resolutely against expanding taste or knowledge about movies. By focusing so obsessively and voluminously on the most readily, tyrannically available items, critical discussion is not simply reflecting the commercial film distribution situation in North America, but actively contributing to it. By elevating the latest pop detritus to the level of godhead, by implicitly declaring the centrality of pop moviemaking (most often bad pop moviemaking) above all else, it only further occludes those films that don't have the advantage of being relentlessly drilled into our consciousness by the marketing machine. Why bother wrestling in print with films that are challenging, strange, obscure, or entertaining in different and novel ways when The Truth is playing in 2500 theatres?

I submit this is a challenge we should all take seriously and explore for ourselves. When it comes to the "high vs. low culture" dilemma, similar if not identical to what Tracy is describing here, I tend to be agnostic. I would never say that run-of-the-mill studio "product" could not offer something of critical interest. (Read Thomas Schatz's "The Genius of the System: Hollywood Filmmaking in the Studio Era" for a wonderful company-by-company guide to studios' individual hallmarks, from roughly 1920 to 1960.) I tried to analyze cinematic craft and grammar in writing about, for example, what I saw as a cynical product called "
Advertisement
Speed Racer." Interestingly, it split commenters right down the middle. Likewise, just because Quentin Tarantino slaps his name on some sludge he dredged up from his video-store days (a martial arts extravaganza, or a black-leather exploitation movie) because he thinks it's cool (and somebody thinks its potentially profitable in the here and now), does that make it inherently more "interesting" that it would have been otherwise? I think it's important (foolish and naive though I may be) to raise such questions, and to try to articulate what I see as worthwhile artistic (and/or industrial) distinctions between movies -- even ones that, on the surface, may seem generically similar. I always thought that was a key part of the critic's function -- and (why not?) every critically engaged moviegoer's sense of curiosity.

Yet, to present evidence and reasoning to make a case that such pictures are trite and sloppy and inept is not only to risk sounding like a cranky old spoilsport, but I suspect to give the movies themselves more detailed attention than they really deserve (or can support). Hey, they're just fun, aren't they? Well, yes, to some people they are, and there's no reason to support or pooh-pooh them on those flimsy grounds. Is that really a critic's job, to identify the presence of subjective "fun-ness" in a motion picture? Who wants or needs to read a critic (even an old-timey one) to discover that? How does that add anything to somebody's perception of a movie? Joe Bob Briggs was quite entertaining in a pseudo-redneck kind of way, but the self-styled anti-snobs actually took him seriously, whether they knew it (or cared to admit it) or not. Yeah, they "got" the joke, but they also believed in it.

The danger (and it is a real danger, I think) is the dumbing-down of critical standards (yawn) to the point where we fail to apply critical methods to film at all. Most moviegoers say they don't trust critics, don't read them, and aren't interested in their opinions. They've always said that. A lot of them are lying or fooling themselves, but I think we should take them at their word and stop pretending that we're writing for them. Millions of people watch movies (it may still be the most popular leisure activity in the United States, I don't know for sure), but only a tiny fraction of them read (or claim to read) reviews. Editors need to stop demanding that critics should be writing for the very people who don't read them. And don't want to and wouldn't care about what they say anyway. Harrumph!

I'm not saying that a critic or reviewer's job (I'm trying not to use "critic" and "reviewer" interchangeably here, but I may slip up) is to promote "specialty" films just because they're "indie" productions or made in a foreign language. There's more than enough crap that falls into those categories, especially given the unfairness and inadequacies of U.S. distribution and exhibition. To give something extra credit just because of the circumstances under which it was made or released is deeply insulting -- like people who don't see the condensation in their self-satisfyingly "generous" behavior toward a disabled person, or the racism in their "positive" treatment of a person of color. Once you start putting films, or people, into your neat little categories for special consideration, you're patronizing them, ghettoizing them, treating them as something (or someone) less worthy, not more. (No, I'm not talking about affirmative action, the idea behind which is institutionalized equal opportunity to balance current and historical institutionalized disadvantages.)

A film can lack "production values" and still be a great film. But that doesn't change what's on the screen, though it's often considered unfair to say so. After all, the movie was made for only $XXXXX! And today, many overblown big-budget movies adopt what were once considered low-budget aesthetics (shaky-cam, digital grain, etc.) to appear more "gritty" or "realistic" (or, as David Bordwell has observed, to cover a multitude of sins, including plain old sloppiness and laziness.)

I'm sure I've strayed far from what Andrew Tracy and A.O. Scott were talking about in my stream-of-consciousness argument (with myself). Please weigh in with your thoughts.