To watch F.W. Murnau's "Nosferatu" (1922) is to seethe vampire movie before it had really seen itself. Here is the story of Dracula before it was buried alive in clichés, jokes, TV skits, cartoons and more than 30 other films. The film is in awe of its material. It seems to really believe in vampires.

Max Schreck, who plays the vampire, avoids most of the theatrical touches that would distract from all the later performances, from Bela Lugosi to Christopher Lee to Frank Langella to Gary Oldman. The vampire should come across not like a flamboyant actor but like a man suffering from a dread curse. Schreck plays the count more like an animal than a human being; the art direction by Murnau's collaborator, Albin Grau, gives him bat ears, clawlike nails and fangs that are in the middle of his mouth like a rodent’s, instead of on the sides like on a Halloween mask.

Murnau's silent film was based on the Bram Stoker novel, but the title and character names were changed because Stoker's widow charged, not unreasonably, that her husband's estate was being ripped off. Ironically, in the long run Murnau was the making of Stoker, because “Nosferatu” inspired dozens of other Dracula films, none of them as artistic or unforgettable, although Werner Herzog's 1979 version with Klaus Kinski comes closest.

“Nosferatu” is a better title, anyway, than “Dracula.” Say “Dracula” and you smile. Say “Nosferatu” and you've eaten a lemon. Murnau's story begins in Bremen, Germany. Knock (Alexander Granach), a simian little real estate agent, assigns his employee Hutter (Gustav von Wangenheim) to visit the remote castle of Count Orlok, who wishes to buy a house in town--"a deserted one." A clue to the story can be found in Orlok's letter, which we see over Knock's shoulder. It is written in occult symbols; since Knock can read it, we should not be surprised later when he calls Orlok “Master.”

During Hutter's trip to Orlok's lair in the Carpathian Mountains, Murnau's images foretell doom. In an inn, all of the customers fall silent when Hutter mentions Orlok's name. Outside, horses bolt and run, and a hyena snarls before slinking away. At Hutter's bedside, he finds a book that explains vampire lore: They must sleep, he learns, in earth from the graveyards of the Black Death.

Hutter's hired coach refuses to take him onto Orlok's estate. The count sends his own coach, which travels in fast-motion, as does his servant, who scurries like a rat. Hutter is still laughing at warnings of vampirism, but his laugh fades at dinner, when he cuts himself with a breadknife and the count seems unhealthily interested in “Blood--your beautiful blood!”

Two of the key sequences in the film now follow; both are montages in which simultaneous events are intercut. That's a routine technique today, but Murnau is credited with helping to introduce the montage, and here we see Orlok advancing on Hutter while, in Bremen, his wife, Ellen, sleepwalks and cries out a warning that causes the vampire to turn away. (He advances and retreats through an archway shaped to frame his bat-like head.) Later, after Hutter realizes his danger, he escapes from the castle and races back to Bremen by coach, while Orlok travels by sea, and Murnau intercuts the coach with shipboard events and Ellen restlessly waiting.

The shots on the ship are the ones everyone remembers. The cargo is a stack of coffins, all filled with earth (from the nourishing graveyards of the plague). Crew members sicken and die. A brave mate goes below with a hatchet to open a coffin, and rats tumble out. Then Count Orlok rises straight up, stiff and eerie, from one of the coffins, in a shot that was as frightening and famous in its time as the rotating head in “The Exorcist.” The ship arrives in port with its crew dead, and the hatch opens by itself.

Murnau now inserts scenes with little direct connection to the story, except symbolically. One involves a scientist who gives a lecture on thevenus flytrap, “the vampire of the vegetable kingdom.” Then Knock, in a jail cell, watches in closeup as a spider devours its prey. Why cannot man likewise be a vampire? Knock senses his Master has arrived, escapes, and scurries about the town with a coffin on his back. As fear of the plague spreads, “the town was looking for a scapegoat,” the titles say, and Knock creeps about on rooftops and is stoned, while the street is filled with dark processions of the coffins of the newly dead.

Ellen Hutter learns that the only way to stop a vampire is for a good woman to distract him so that he stays out past the first cock's crow. Her sacrifice not only saves the city but also reminds us of the buried sexuality in the Dracula story. Bram Stoker wrote with ironclad 19th century Victorian values, inspiring no end of analysis from readers who wonder if the buried message of Dracula might be that unlicensed sex is dangerous to society. The Victorians feared venereal disease the way we fear AIDS, and vampirism may be a metaphor; the predator vampire lives without a mate, stalking his victims or seducing them with promises of bliss--like a rapist, or a pickup artist. The cure for vampirism is obviously not a stake through the heart, but nuclear families and bourgeois values.

Is Murnau's “Nosferatu” scary in the modern sense? Not for me. I admire it more for its artistry and ideas, its atmosphere and images, than for its ability to manipulate my emotions like a skillful modern horror film. It knows none of the later tricks of the trade, like sudden threats that pop in from the side of the screen. But “Nosferatu” remains effective: It doesn’t scare us, but it haunts us. It shows not that vampires can jump out of shadows, but that evil can grow there, nourished on death.

In a sense, Murnau's film is about all of the things we worry about at 3 in the morning--cancer, war, disease, madness. It suggests these dark fears in the very style of its visuals. Much of the film is shot in shadow. The corners of the screen are used more than is ordinary; characters lurk or cower there, and it's a rule of composition that tension is created when the subject of a shot is removed from the center of the frame. Murnau's special effects add to the disquieting atmosphere: the fast motion of Orlok's servant, the disappearance of the phantom coach, the manifestation of the count out of thin air, the use of a photographic negative to give us white trees against a black sky.

Murnau (1888-1931) made 22 films but is known mostly for three masterpieces: “Nosferatu”; “The Last Laugh” (1924), with Emil Jannings as a hotel doorman devastated by the loss of his job, and “Sunrise” (1927), which won Janet Gaynor an Oscar for her work as a woman whose husband considers murdering her. The worldwide success of “Nosferatu” and “The Last Laugh” won Murnau a Hollywood contract with Fox, and he moved to America in 1926. His last film was “Tabu” (1931); he was killed in a car crash on the Pacific Coast Highway just before its premiere, his promising career cut short at 43.

If he had lived, the rest of his career would have been spent making sound films. He probably would have made some great ones. But with a silent like “The Last Laugh,” he famously did not require a single title card to tell his story. And “Nosferatu” is more effective for being silent. It is commonplace to say that silent films are more “dreamlike,” but what does that mean? In “Nosferatu,” it means that the characters are confronted with alarming images and denied the freedom to talk them away. There is no repartee in nightmares. Human speech dissipates the shadows and makes a room seem normal. Those things that live only at night do not need to talk, for their victims are asleep, waiting. 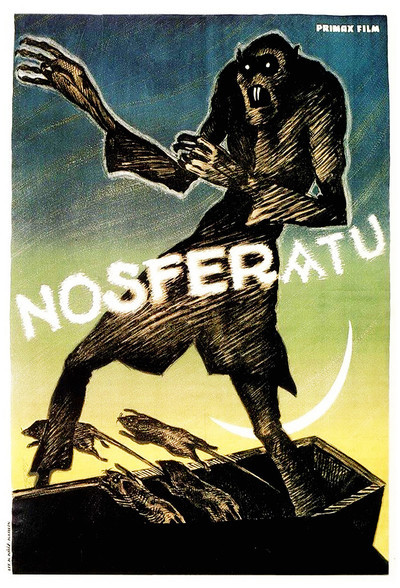